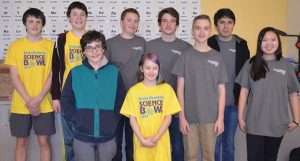 It’s their first time, but they’ll be back!

Where is Betelgeuse located? What is 6.93 times 10 to the fourth power? How many protons does an atom have if it is in group two, period three and is in the twelfth element of the periodic table? What is most commonly noted as the most diverse class of life on earth? How old is Michelle if four years ago she was one-half the age she will be ten years from now?

Even if you knew the answers to these brain busters, could you beat someone else to a game-show style buzzer and blurt your response in five seconds or less – all with your teammates depending on you and a judge, scorekeeper, science expert, and audience looking on?

These 27th annual regional events were part of the U.S. Department of Energy’s (DOE) National Science Bowl, a nationwide academic competition that tests students’ knowledge in all areas of science and mathematics. It’s the only academic event that is sponsored by a U.S. government agency. The DOE created the competition in 1991 to encourage students to excel in mathematics and science and to pursue careers in these fields. Approximately 265,000 students have participated in the National Science Bowl throughout its history.

The event was free, and any school, whether large or small, was eligible to compete. Sponsors included the U.S. Department of Energy (DOE), the Western Area Power Administration for the Rocky Mountain Region, the National Renewable Energy Laboratory (NREL), Alliance for Sustainable Energy, LLC, and Verizon. About 90 volunteers helped with rotating the teams through different classrooms, timing, scoring, food, and record-keeping.

Secondary science teacher Heather Newman was the advisor and coach for the two Gilpin teams, each of which had five members. All of these pupils earn top grades and relished the challenge of the science bowl competition. The high school team was comprised of sophomores Cooper Lindberg (captain), Chad Holmes, Juan Madrigal, Blaizun Diamond, and Anna Yocom (alternate). The middle school team was made up of eighth graders Damien Sonsino (captain), Shane Wu, Gabriel Bergeson, Drake Hylton, and sixth grader Sasha Sonsino (alternate).

The Gilpin teams did not place, but as newbies, it was their goal this year to simply go and find out what everything was all about.

“The high school team won two rounds. We didn’t know what to expect, but now we know more about how to strategize,” Newman reported.

Fort Collins High School took the top honors and a trophy. In late April, their team will head to the National Science Bowl in Washington, D.C., where they will compete against more than 400 students from 70 high schools.

The teams faced off in fast-paced round robin and double elimination formats, being quizzed on a range of science disciplines including biology, chemistry, earth science, computer science, physics, energy, and math. The questions are at a freshman college level and, in general, are easier in the earlier rounds of the competition than in the later rounds.

Gilpin students elaborated on their experience. “There were 47 teams competing in our bowl,” the high schoolers related. “We went into different classrooms for the rounds. Two competing teams were at different tables. The judge would ask a question, and whoever hit their electronic buzzer first got to try to answer the question within five seconds. That was called the toss-up question. If we answered correctly, we could receive a bonus question worth ten points, and we got 20 seconds to answer that. We could talk among ourselves on the bonus questions.”

“At first it was nerve-wracking, then enjoyable,” Juan said. “It took about half an hour per round, and we got short breaks. There was a game, a bye, and then four more rounds.”

Chad noted, “If you have a feeling that you’re right, you should answer. There were penalties for not being recognized to speak or for interrupting another team and answering incorrectly – you had to be right if you interrupted!

“The better teams were more aggressive and got more penalty points. Gilpin gave up only eight penalty points, but they collected 20 from other teams,” Cooper added.

Middle school students related having to be at the bus at 5:30 a.m. and check in at the competition site around 7:00 a.m. Their bowl had 24 teams.

“We were allowed to write stuff down, but we couldn’t use a calculator,” Drake said. “The best part for me was being in front of a crowd and thinking under pressure. The officials seemed friendly, and no one tried to psych the other teams out; they were just there to do their job.”

Damien commented on the need for caution. “The judges might think you were stalling if you took a deep breath before answering, or demand to know if you were challenging a question if you asked for clarification.”

Newman watched and kept scores and stats. She said, “The kids did great, and I’m proud of them. It exceeded our expectations.”

She said the three months of preliminary practice were fun. The National Science Bowl does not provide any lists of subjects to study, so they worked on sample questions from previous bowl years that were listed on the website and studied at home and at school.

“The middle school team wanted to practice all the time. After all, what’s more exciting than being with people who like what you like? They practiced two times a week and then every day after school a few weeks before the event. It was a learning experience, because they were exposed to stuff they didn’t know.”

Science Bowl was a family affair as well; Newman’s son Gabriel Bergeson was on the middle school team, and Damien and Sasha Sonsino are brother and sister.

Although the two science teams boiled down to just ten students, there were 20 young people who came to the first lunch meetings last fall.

“We had a no-cut policy in place, but not all of the students had time to participate because of various other activities they were doing.”

Newman and her students are game to try again next year and plan to keep their team in place.

They learned some helpful strategies for next time. For example, they discovered that other teams had students who specialized in different subjects, so that not every student needed to study hard on every subject. Additionally, they received a grant from the Gilpin County Education Foundation; they hope to use it to purchase some textbooks to study over the summer. The Foundation also provided their Bowl t-shirts.

The Science Bowl was an idea whose time had come. Jim Larson, an employee of NREL and a past volunteer at the Science Bowl, was all for the competition.

“I have been trying to get Gilpin to participate since my son Kenny went to Gilpin,” he declared. (Kenny graduated in 2013 and attends the Colorado School of Mines.) “I was glad when Heather Newman stepped up to coach the teams.”

Jim and his wife Nancy chaperoned the high school team, and ten parents went along on the middle school trip.

The competition was fun and a learning experience for everyone involved. Despite all the hard work and the nerve-shattering pace of the competition, the general consensus among coach, teammates, and chaperones was that they would do it again in a heartbeat.

By the way, did those tough questions at the top of this article rattle you? No worries. Here are the answers: the constellation Orion; 69,300; one; insect; 18.

END_OF_DOCUMENT_TOKEN_TO_BE_REPLACED

Where the dead get to tell their story By Jaclyn Schrock On Saturday, August 21, the Gilpin Historical Society held their annual Cemetery Crawl. Tickets allowed the shuttle of hundreds of guests from the Teller House parking lot to the Cemetery. Depending on v... END_OF_DOCUMENT_TOKEN_TO_BE_REPLACED

Benefitting the county, schools, and much more By Don Ireland   This year marks the 30th anniversary of casinos opening in the former little mining towns of Black Hawk, Central City and Cripple Creek, Colorado. In those early years, smoking was allowed inside ... END_OF_DOCUMENT_TOKEN_TO_BE_REPLACED