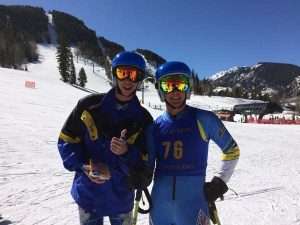 It was a beautiful day in Aspen Colorado for the State High School Ski Race Championship. Gilpin High School students Sam Snyder and Jon Lovett competed in the slalom races on Friday, February 27. While neither of the racers placed, they both had respectable runs and felt good overall for their performances. The skiers have had a friendly competition throughout the season and Lovett beat Snyder by two-tenths of a second in their combined scores. This was a great way for Jon to end his senior year of racing. Sam plans to race again next year for the Clear Creek High School Golddiggers which finished 7th in the state for Boys Slalom.

END_OF_DOCUMENT_TOKEN_TO_BE_REPLACED

Where the dead get to tell their story By Jaclyn Schrock On Saturday, August 21, the Gilpin Historical Society held their annual Cemetery Crawl. Tickets allowed the shuttle of hundreds of guests from the Teller House parking lot to the Cemetery. Depending on v... END_OF_DOCUMENT_TOKEN_TO_BE_REPLACED