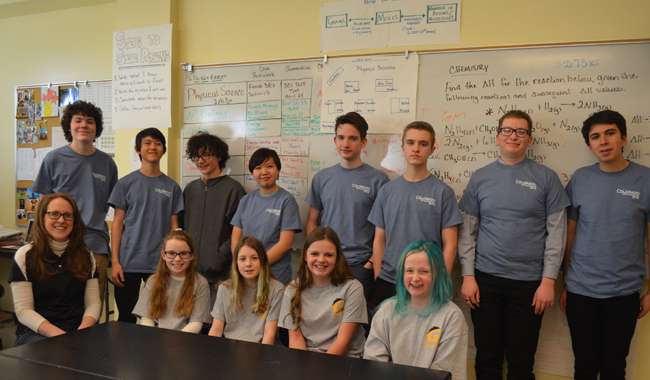 Gilpin County Middle and High Schools took three teams to the 28th Colorado Science Bowl recently, coming home with four victories. The high school event took place on March 3 at Dakota Ridge High School in Littleton, with 41 teams competing. The middle school competition was held on February 3 at Mountain View High School, with 24 teams participating. It was only the second time that Gilpin had sent teams to the Bowl; last year was the inaugural effort.

“Out of all of our matches, we only came across one other team member from sixth grade, so our team is very young,” reported secondary science teacher and bowl coach Heather Newman. “We played six matches and won one of them. We were thrilled to win one!”

The Gilpin middle school team won its match against Woodrow.

These regional events were part of the U.S. Department of Energy’s (DOE) National Science Bowl, a nationwide academic competition that tests students’ knowledge in all areas of science and mathematics. The DOE created the competition in 1991 to encourage students to pursue careers in these fields.

The free event was open to any school, regardless of size. Scores of volunteers help rotate the teams through different classrooms, time and score the matches, provide food, and keep records. The teams faced off game-show style in round robin and double elimination formats and were quizzed in the various areas of science and math at a freshman college level. Ft. Collins High School won the competition and will head to the National Science Bowl in Washington, D.C. in April, where they will compete with students from more than 70 high schools.

Newman described the atmosphere and procedure at the regional Bowl.

“It definitely isn’t like a sporting event – no shouting or cheering. In fact, there isn’t any noise, electronic devices, or note-taking allowed by any of the spectators during the matches. The participants are focused the entire time on the fast-paced and difficult questions from the following categories: physical science, earth and space science, life science, energy, and math. Participants buzz in when they know the answer and can earn the opportunity for a bonus question for their team. Strict rules are followed and point penalties given for not adhering to them. Our first match started at 8:15 a.m., and our last match ended at 11:45. Matches lasted 30 minutes, and we had a short break between them to get to the next match.”

The students shared their experience. Middle schoolers Aucklynn and Sasha had attended last year, but this year was the first time for Jordanna and Anna. The young team struggled with the math questions, as they had not yet taken as many math courses as their older opponents, but they felt they did well at earth science and kept improving as the day went on.

“It was cool to be there, a new experience,” Jordanna declared. “It was super exciting when we won. We all hugged!” Anna added.

Sasha and Aucklynn agreed that although it was fun to be there, it was discouraging when they didn’t make points. The competition was tough, and while some of the teams were nice, others could be a bit rude.

“The most important thing was to keep a positive attitude and to have fun,” Sasha noted.

2018 was the second go-round for the high school students, who began studying shortly after homecoming last fall. They worked during lunch hours, after school on Tuesdays, and at home.

They learned last year that they should have “experts” in each subject, so that is how they prepared this year. Cooper and Drake focused on chemistry, Anna and Blaizun on biology, Damien and Juan on earth science, and Chad and Shane on physics.

“We blew them away. They were a 5A school, but they didn’t seem prepared, and they were slow in their answers.”

The toughest round was the first one, the teammates noted, because the buzzer wasn’t working. The last round hurt, too – “We lost 96 to 22.”

Damien, the Team 2 captain, commented, “It was an interesting event. It’s unique, in that not a lot of people get into science. It was a good indication of what science should be.”

Many supportive adults got involved. Jim Larson, a past volunteer at the Science Bowl and member of the Gilpin County Education Foundation, provided encouragement and t-shirts compliments of the Foundation.

“We also had a very large showing of support from parents who came to watch,” Newman said. “Parent Katie Yocom went along to help and co-coach and provide moral support. Our middle school team was exhausted by the end of the morning, and before heading back home, we celebrated with ice cream treats, compliments of Mr. and Mrs. Gagnon.”

Newman is justly proud of her students. “They did great. I’m excited because they are excited to take biology and physics now and to learn about what they heard at the science bowl. They are all high achievers, bright, intelligent, anxious to learn, and fun to work with.”

They did take away a few ideas for next year.

“The high school team 2 is pretty young. They came up against others who seemed so much older – some kids even had facial hair! Our teams wore t-shirts and thought maybe that made them look even younger, so they decided that next year they would try to look older by dressing more formally.”

Well, how do you think you would do at the science bowl? Let’s get a look at these sample middle school questions: Which of the following fossils is the oldest – trilobite, snake, petrified wood, or megalodon tooth? (trilobite) What is the year of a person’s death who lived in the year 580 B.C. and lived 63 years? (517 B.C.) What is the most common source of energy for brain cells in humans? (glucose – this probably means we get to eat more candy bars!)

If you found those a snap, try some high school puzzlers on for size: What is commonly accepted as the engine that most directly drives plate tectonic motion? (mantle convection) What is the general biological term for organisms that synthesize organic molecules from inorganic molecules using light as an energy source? (photoautotrophs) Using g rounded to the first decimal place, how much does an 80-kilogram person weigh on earth, giving your answer in proper SI units? (784 Newtons – better lay off those candy bars!)

All the students agreed that the Colorado Science Bowl was a great experience, and they are certainly game to try again next year. They are going to buckle down, study, get some dress shirts, and maybe even grow some facial hair… 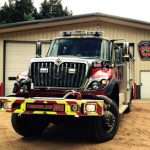 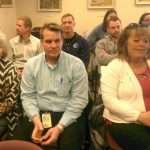