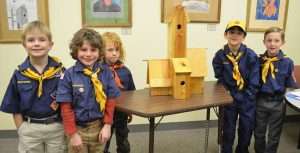 The Gilpin County Board of Education held its regular meeting on Tuesday, February 7, at 7:00 p.m. Board members present were Craig Holmes, Brook Ramsey, Kersten Armstrong, and Steve Boulter. Member Charlotte Taylor was absent. Superintendent David MacKenzie and Secretary to the Board Gretchen Sechler were present.

Gilpin County School District RE-1 has been ranked by the website SchoolDigger.com as fourteenth of 106 school districts in Colorado, giving the District a four out of five-star rating. The site ranked Gilpin academically at 86.6 percentage points above the rest of the school districts, both large and small.

The website calculated the rankings based on test scores released by the Colorado Department of Education (CDE) on September 1, 2016.

Ridgway School District No. R-2 in Ouray County was rated number one.

Members of Cub Scout Pack 251 presented a donation to the school of a deluxe four-sided wooden birdhouse that they had made themselves. Den leader Scott Murphy said the boys got the idea to make the birdhouse when “Billie,” a woman who comes to the school to water flowers, donated an old birdhouse to the Pack. She wanted to see them do something with it, so they took it apart, made templates of the original pieces, and built a new one.

The Cubs cut the wood with a band saw and used a drill press to cut out the holes. They attached the pieces with glue and a nail gun. In the process, they learned woodworking, tool safety, and community service. They also made birdhouses to donate to their sponsor, the Central City Elks Lodge, and to the Gilpin Community Center.

MacKenzie presented the final 2016 accreditation ratings given by the CDE. The elementary and secondary schools both received a “performance” rating, the highest that is given. The District received an “accredited” rating.

MacKenzie said that the District is only six points away from receiving the highest rating, “accredited with distinction.” He said he has strategies ready to attain that rating. He gave two reasons for the District not yet getting the distinction rating: low growth in English language arts in the elementary school; and performance by small student groups, including those in the free and reduced lunch and special needs categories.

Armstrong questioned whether lower participation on tests might have had an effect. MacKenzie responded, “Common Core and PARCC tests get lots of negative press. Parents can opt their children out of these tests, but PARCC was developed by Colorado teachers. It’s a misnomer that it’s a test that came from another place.”

He said the District would like to see as many students as possible taking the tests.

Holmes commented that small schools such as Gilpin are hurt if children who would have performed well on the tests don’t take them. MacKenzie remarked that that was a valid hypothesis, but concluded, “We don’t prepare the students for just one test on one day.”

The Board performed a first reading on the District calendar for the 2017-18 school year. Members reviewed two drafts. Both schedules show 151 teacher-student contact days.

Draft 1 has a start date of August 14, 2017, an ending date of May 31, 2018, winter break from December 18 through January 2, and a spring break during the last week of March. According to research done by MacKenzie and Sechler, this plan matches that of surrounding districts Jeffco, Clear Creek, and Boulder Valley.

Draft 2 includes a start date of August 21, 2017, an ending date of June 7, winter break from December 25 to January 8, and a spring break during the last week of March. Graduation would take place on May 26, which Armstrong noted was over Memorial Day weekend.

The Board members favored Draft 1 and will present it to parents and school committees for consideration. MacKenzie will see what feedback is received and report at the next Board meeting on February 21.

The Board reviewed several policies for a first reading, including the Safe Schools/Threat Assessment. MacKenzie noted that the Colorado Association of School Boards (CASB) does not currently have a model policy. He looked at those of other districts and drafted a policy, which addresses procedures for investigating reports of student behavior that could pose a threat to safety and how the school should intervene in such cases.

The Professional Staff Induction Program policy focuses on training new staff about the district and teaching procedures. More than a simple orientation, it is required by state statute and is intended to instruct on quality standards for teacher evaluation.

Policies on graduation requirements are meant to replace old policies that had a variety of requirements for different graduating classes. The new draft policy conforms to CASB language and the 28 credits that Gilpin requires for graduation. The policy would be in place for the classes of 2017, 2018, 2019, and 2020.

Another policy that would apply beginning with the incoming freshman class of 2021 includes CDE requirements pertaining to college and career readiness, in addition to English and math requirements. MacKenzie, Secondary Principal Alexis Donaldson, and school counselors collaborated on options to assess whether a student meets the requirements for graduation; among the various assessments are an Armed Services Vocational Aptitude Battery, a score of at least 430 on the SAT English test, a business and industry certification, or a capstone project that may include a portfolio of a student’s work organized around a central area.

MacKenzie reported on a professional learning day held on February 3. His focus was “accountability vs. sustainability.” He said the elementary and secondary schools need to keep momentum going and not get complacent now that they are rated at “performance” level. He challenged the teachers to keep improving.

The present emphasis on “teachers teaching teachers” was continued, with sessions on how to create videos in order to teach the children how to create them, incorporating learning games, and using interactive maps.

The Request for Proposal was forwarded to the engineer and architect. Bids must be taken for the excavation project; MacKenzie estimated the cost of excavation to be in the vicinity of $250,000. He figured detonation of the mountain to cost about $75,000-$100,000. A water line that is in the detonation area will need to be buried deeper. The budget now stands at about $400,000. MacKenzie believed that all could be done while still using the football field for one more season.

The District is still on track for paving the south parking lot, which MacKenzie said will be paid for in the 2016-17 fiscal period. He was waiting to hear on a GOCO (Great Outdoors Colorado) grant for the playground. If the grant is not received, the design will be revisited. It, too, will be paid for in 2016-17. The excavation will come out of the 2017-18 budget.

MacKenzie said the building needs to be painted and touched up, which could be partly done with the District’s in-house crew and partly contracted out. He recommended starting with the common areas seen by visitors – cafeteria, halls, and gym.

The superintendent is working with Gilpin Sheriff’s Deputy Kevin Armstrong to improve emergency communications. Federal grant money is being pursued.

The Crisis team will meet next week and conduct a safety drill in February. The Safety Committee will also meet.

The Board met in executive session regarding personnel matters.

END_OF_DOCUMENT_TOKEN_TO_BE_REPLACED

Benefitting the county, schools, and much more By Don Ireland   This year marks the 30th anniversary of casinos opening in the former little mining towns of Black Hawk, Central City and Cripple Creek, Colorado. In those early years, smoking was allowed inside ... END_OF_DOCUMENT_TOKEN_TO_BE_REPLACED

Where the dead get to tell their story By Jaclyn Schrock On Saturday, August 21, the Gilpin Historical Society held their annual Cemetery Crawl. Tickets allowed the shuttle of hundreds of guests from the Teller House parking lot to the Cemetery. Depending on v... END_OF_DOCUMENT_TOKEN_TO_BE_REPLACED