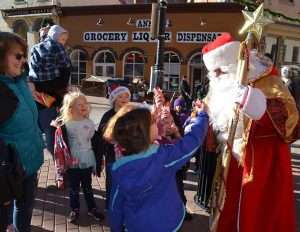 Central City celebrated the merry, magical 21st Annual Tommyknocker Holiday Weekend November 29 through December 2. The event began on the 29th with the children’s parade from the Teller House up Main Street to decorate the City tree. The kids reached up as high as possible to place their handmade popsicle stick snowflakes, bird seed balls, cranberry and marshmallow garlands, and puzzle piece snowflakes.

City street crews and Central City’s Fire Department were on standby to block off the streets for the students’ march with Father Christmas. The crews had placed about 200 ornaments on the tree, hung 350 feet of garland and lights, and attached wreaths to the street lamps. New ornaments were still awaited — tree and candy cane pole decorations and a star for the treetop. Workers advised that about ten thousand dollars had been spent on the new decorations this year.

After each class had an opportunity to trim old Tannenbaum, Father Christmas led the eager boys and girls to the Teller House for a Christmas tale. As they tramped along, they discussed the unwelcome possibility of getting coal for Christmas and wondered if Santa might not see his way clear to hand out diamonds instead.

The pupils gathered cozily with their teachers and a few parents into the storytelling room. Tommyknockers co-coordinator Barb Thielemann, garbed as Mrs. Claus, welcomed the group and introduced professional storyteller Dianne Wittmann of Idaho Springs.

Wittmann began a true tale that happened long ago. The kids listened in rapt attention as Wittmann spun the story, which centered on a family that seemed poor in belongings but rich in love. Back in the days when hoboes rode the rails, this family would feed pancakes and coffee to any tramp that knocked on their door.

“We should never hesitate to help someone,” was the mother’s belief.

Christmas gifts were simple — a little candy, perhaps some knit socks. The most special treat was a juicy orange — something you couldn’t get at the store.

The day before Christmas Eve, Pa was going on his “Christmas mission” to fetch an orange for each family member, and the children were all getting ready to perform in a pageant. The youngest boy kept rehearsing his line: “Fear not, for I bring you good tidings of great joy.” As he practiced, he kept thinking of that succulent orange.

It snowed hard through the evening, and Pa didn’t return. Everyone was getting worried. Would Pa make it back in time for the pageant?

“Fear not …” the boy remembered as he waited.

The next morning, snow lay deep around the house, and all was quiet. Suddenly they heard the train whistle. Then they saw someone coming across the field carrying a large sack. The snow was too deep to get through with the wagon, so Pa had caught a ride on the train. And he had brought the precious oranges! Everyone was excited, but Ma said the oranges would have to wait till after the pageant.

The boy was tantalized by the oranges’ plump beauty and pungent aroma. No one was looking. Maybe he would just touch one. Touching led to holding. Then, quick! Ma was coming! He shoved it in his pocket, deciding to put it back after the pageant.

As he prepared for his moment on stage, the boy noticed that his friend Thomas looked very sad. Thomas’s pa was sick, and they couldn’t get a gift for his ma.

The boy pondered what to do. Would Pa think he was ungrateful if he gave Thomas his orange? Ma always said it was right to share. Impulsively, the boy slid the fruit out of his pocket and thrust it at his friend, who accepted it in stunned delight.

Back home, waiting for dinner and the delicious dessert of oranges, the boy worried. Had he done the right thing? Finally, he decided to tell Ma the truth.

“I hope you’re not angry, but I gave my orange away.”

After he explained, Ma said, “That was a kind and generous thing you did. I’m proud, and Pa will be, too.”

The boy remembered his friend’s joy and his Ma’s pride and decided that was all the gift he needed. But when he went downstairs later, all the family had assembled. Ma put an orange in his hand. A ribbon was tied around it. Each family member had given a section of their orange so that the boy could have a treat, too. Their hearts and hands were filled with joy as they celebrated the gift of love.

Gilpin Middle School choir wrapped up the entertainment with favorite holiday tunes. The young audience sang along on “Rudolph the Red-Nosed Reindeer,” and several little girls joined in heartily on the chorus of “Let It Go” from the Disney movie Frozen.

Each child received a treat bag from co-coordinator Shirley Voorhies and other Lady Elks on their way out the door. Thielemann noted that the children’s party was made possible by Peak to Peak Rotary, Ermel’s Thrift Shop, Central City Elks & Elks Ladies, Gilpin County Education Foundation, Central City Local Events, and several casinos.

END_OF_DOCUMENT_TOKEN_TO_BE_REPLACED

Benefitting the county, schools, and much more By Don Ireland   This year marks the 30th anniversary of casinos opening in the former little mining towns of Black Hawk, Central City and Cripple Creek, Colorado. In those early years, smoking was allowed inside ... END_OF_DOCUMENT_TOKEN_TO_BE_REPLACED