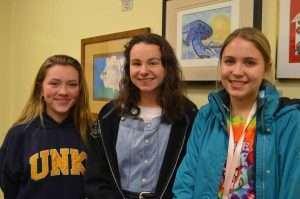 Senior Anna Yocom was the local finalist for the Daughters of the American Revolution Good Citizen Award and received a $700 scholarship.

Gilpin’s basketball teams have wrapped up their regular seasons and are in the midst of playoffs. Two Gilpin wrestlers were just one spot away from going to State.

Ninth graders Maddy Altman and Kennedy Perez spoke to the Board about the cross-curricular learning that is taking place in teacher Dusty Newberg’s writing and history classes.

In history, the students are reading the allegorical book Animal Farm in order to learn about the Russian Revolution. In writing class, they are reading The Communist Manifesto. Class members are divided into two or three groups in these honors classes and do research and collaboration to help each other understand their challenging assignments. The girls said Ms. Newberg is helping the students by engage them more.

Eleventh grader Claire Diekman presented the results of a science lab done in Heather Newman’s class on cell respiration on germinating peas. Students compared germinating peas with dormant peas and learned that germinating peas require more energy because they are actively growing. Class members measured the oxygen consumption to find out the rate of respiration. Germinating peas at room temperature consumed the most oxygen compared to those at other temperatures. Two procedures were done over a period of several days.

Diekman said a future question was: Do full-grown plants have higher or lower respiration rates than germinating seeds that are just beginning to grow?

The Business Manager’s Report, check vouchers, and financial statement for January were accepted as submitted.

Business Manager Terry Scharg’s memo stated that the 2018-19 budget is in line with projections, except for capital projects. It will be necessary to add an additional $30,000-$35,000 in the supplemental budget for the telephone system.

The fiscal year 2019-20 budget process is beginning. The November 2018 Governor’s budget request has been revised; pursuant to the revisions, Gilpin is looking at a decrease in the negative stabilization factor of $46,835 and an increase in total program funding of $176,683, Scharg said. This equates to an increase in per pupil funding of $379. Funding increases are based on an inflation rate of 3 percent. Figures may change as school funding moves through the legislative process.

MacKenzie added that a bill is being considered, called the Kipp Amendment, that would keep per pupil funding at the same rate and restore money to school districts. He had emailed Gilpin’s representatives asking them to support the amendment.

Staff member Sunny Vincent presented a plan for a free soccer clinic for fourth- through eighth-grade girls that she plans to offer in April-May, along with Tony Thorpe of the Gilpin Community Center. She proposed that the school consider funds for a future girls’ soccer team and said that 32 girls had expressed interest.

Vincent noted that the school has fewer girls’ sports than boys’ sports. Girls may participate in volleyball, basketball, and track, while boys have additional offerings of football, baseball, and wrestling. A girls’ team could join the Frontier League and play 16 or more games in a season, she said.

Vincent advised that children start playing soccer through the rec center at age 4 and can play through their early teens. After that, the sport is no longer offered for their age group.

She had spoken with the school’s Athletic Director Jeff Schuessler about costs. This spring’s clinic would cost nothing. She said Schuessler estimated $16,000-$18,000 to start a program, including $9,000-$10,000 for two good goals, which would be a one-time investment. Additional costs would include coaches’ stipend, uniforms, and transportation.

Board members asked about having boys participate in the clinic, and Vincent said they could do so and was in favor of a boys’ team as well. She said boys’ soccer teams generally play in the fall, while girls’ teams compete in the spring. Currently, Gilpin does not have enough boys to make up a football team and a soccer team, both playing in the fall. Also, middle school and high school football teams are already practicing on the field.  Boulter noted that weather might be something to consider. Vincent conceded that some practices would need to be inside, but said those would be days for conditioning and skills work. She added that she has coached soccer for nine years in all types of weather.

Board members were intrigued by the plan and said they would definitely consider it.

Angele Tatum presented to the staff on a February in-service day regarding executive functioning and provided resources on dealing with certain behaviors in the classroom. Secondary staff participated in a podcast jigsaw activity and used a collaborative triad protocol to address a problem they had.

Donaldson attended a conference of Colorado Association of School Executives (CASE) with MacKenzie and Huntoon. She found a workshop on students and trauma that was informative.

The mental health team is working on a student survey addressing culture and climate.

Teachers worked on differentiated lessons and unit planning during their professional development day. They also met this month in data teams to share student growth and ask for suggestions to help students who are struggling or who need enrichment.

Gilpin Elementary students will participate in the last Super School News. The program is being canceled after 40 years due to lack of funding.

Writing consultant Mark Overmeyer will visit on February 27-28 to give feedback relating to writing instruction.

MacKenzie thanked the teachers and students who presented that evening. Special presentations take place during the second board meeting each month (third Tuesday of the month) to show the Board that what happens in the Boardroom is actually happening in the classroom. Elementary and secondary students alternate in giving the presentations.

Jim Noble’s company will be doing the atrium stairs project. It is planned to start in April and be done by the end of May.

MacKenzie reported that the GOCO grant applied for on the stadium seating project was denied. He said the timeline for this project is about 70 days. On April 1, he will put out a Request for Proposal and hopes to have the project worked on over the summer.

A School Security Disbursement Grant was awarded, plus a District match of 25 percent, for a total of $234,907. The 25 percent match will come from a Rural Schools Grant. This will be used for five priority safety and security projects, including fire doors and an automatic lockdown procedure.

The School Board will host a staff appreciation open house on February 21 from 5:00-9:00 p.m. at the Elks Lodge.

The public session ended at 7:58 p.m. and the Board went into executive session after a brief break, regarding matters of negotiations and personnel matters.

END_OF_DOCUMENT_TOKEN_TO_BE_REPLACED

Where the dead get to tell their story By Jaclyn Schrock On Saturday, August 21, the Gilpin Historical Society held their annual Cemetery Crawl. Tickets allowed the shuttle of hundreds of guests from the Teller House parking lot to the Cemetery. Depending on v... END_OF_DOCUMENT_TOKEN_TO_BE_REPLACED