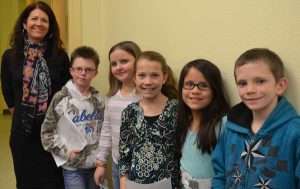 New employees introduced themselves to the Board. Aracelia Ramos-Knaus is a para-professional in Ms. Haley’s kindergarten class. She has been a Gilpin resident since 2000 and a parent volunteer at the school since 2012. She has two children attending Gilpin.

Robin Bartly has been a custodian at the school for the past four and a half months. Her son, a high school senior, attends Gilpin.

Aharon Bellinsky, age 14, was the artist of the month in the Board of Education artist recognition program. He won the distinction for his painting of a pair of penguins as part of students’ winter project. Bellinsky’s art joined that of other students on the wall of the Board room. Each student’s art will remain on display for a full year.

Ms. Sepanik’s fourth grade class was represented by five students who shared “research-based strategies” with the Board. Sepanik reported, “The students have ownership over their learning.” She commented that the strategies really are working.

One of the students explained the term “learning target” as a goal that must be reached by the end of class time. The children answered four questions:

2) “How do you know you’re proficient?” Reports help; it also helps to get feedback for mistakes.

3) “What happens if you’re not proficient?” If proficiency is not reached, there is intervention, which takes place in small groups during the day. “I can listen more carefully and get help.” “I get feedback and keep trying.”

4) “How does technology help your learning?” Technology is being used to help the students learn basic math facts and work on STAR test scores.

The students said that Chromebook computers gave feedback, helped them practice, and led them to higher levels, in addition to helping them learn to type and do research for extra credit. The teacher keeps track of student progress through printouts and graphs that show growth. The graphs help the teacher see if there is a problem, and the children tell her why they think they had issues.

The Board accepted Business Manager Terry Scharg’s memo, which noted that the fiscal year was half over, and expenses and revenues are in line with budgeted projections. Scharg also reported that the Governor’s Office of State Planning and Budgeting said Colorado’s economy is performing better than the national economy, and tax revenues are higher. Accordingly, forecasts for 2015-16 include about $488.6 million in additional revenues and an additional 10,460 students in Colorado. The Governor’s budget, said Scharg, proposes another $200 million reduction in the negative factor (budget stabilizing cuts). Scharg said the March forecast will determine Gilpin’s funding for the 2015-16 fiscal year.

Check vouchers, the financial statement for December, and the quarterly report were accepted. Revenue for December was $66,410. Expenses were $376,200.

The Board reviewed on first reading several policies regarding employment, including, among others: nondiscrimination and equal opportunity; treatment of staff and a respectful workplace; sexual harassment; maternity, paternity, and parental leave; leave of absences; military leave; grievances; staff dress code; instructional assignments and transfers; retirement; and policies regarding support staff.

A lengthy discussion occurred about a policy entitled “Responsibilities of the Teacher,” which states that the work year for full-time teachers shall be 162 days, 11 of which are for training or professional development. Teacher contract time each day shall be 7:30 a.m. to 4:15 p.m. Teachers will be provided a minimum of 200 minutes per week of planning time. Among teachers’ duties are pupil record keeping and discipline and reporting to parents. Boulter noted that three teachers had not posted grades for his children on the Infinite Campus portal on the school’s website. He said the teacher told him that the computers were down, but maintained that teachers still need to give parents updates.

“The computers are down,” or “I didn’t have time to put it in,” are not acceptable excuses, Boulter contended. Computer failure has been an issue at the school, with teachers becoming frustrated, said MacKenzie. Board members agreed that teachers should continue to keep parents informed, however, and MacKenzie said if a teacher isn’t doing their job, a parent should contact the supervising principal, who should make sure that communication gets to the parent. Donaldson said teachers are expected to have Infinite Campus updated every Tuesday by 4 p.m. Eldred advised that the elementary school hasn’t been using Infinite Campus to keep records, but is in the process of learning to use it and will be doing that consistently during the fourth quarter.

The Board accepted the 2015-16 calendar, which shows a start day of August 10, 2015 for middle and high school students and of August 11 for elementary; and an ending date of May 26. Graduation is scheduled for May 14.

The Board accepted the 2016-17 calendar, which shows a start day of August 8 for middle and high school students and of August 9 for elementary; and an ending date of May 25. Graduation is scheduled for May 13.

MacKenzie said Cortez had been working with volunteers helpers. Ten had gone through the application process and background checks, and all passed.

District daily announcements are being posted on the school’s website, along with a month-long calendar listing breakfast and lunch menus. This will be in lieu of the monthly newsletter.

Donaldson reported that Julie O’Brien from the Center for Transforming Teaching and Learning was the trainer for the teacher’s in-service day on January 9. Topics were collecting and using data in the classroom and giving feedback.

Staff had been reflecting on current teaching strategies during Wednesday morning staff time and will focus next on data dialogue, using STAR and ACT practice test data.

The secondary independent learning center (formerly library) is now open. Gilpin has joined the Aspen Cat Consortium, through which students have access to over 7,000 books from other libraries.

Eldred said Ellen Hunter, literacy specialist from the Colorado Department of Education, is supporting the staff in reading development.

The elementary staff had also participated in Julie O’Brien’s training on January 9.

Teachers participated in professional development presented by a cohort group of teachers on tips for using technology with classroom instruction.

All elementary grade levels have completed STAR assessments, and initial results indicated positive overall growth. The Montessori class will have their assessments next week.

SOAR students (Scholarly, Organized, Accepting, and Respectful) for December and January will be recognized on February 2 at 7:30 a.m. in the elementary library.

Eldred and the Montessori teachers will attend professional development on February 21 in Boulder.

MacKenzie advised that although there are still some glitches, the school’s technology is functioning more consistently. He said the biggest issue in the past couple of weeks was student access.

“The problem is the server,” he noted, “but our tech person is working on it.” He also said the Wi-Fi was inconsistent with the information flow, and the network information flow is being adjusted.

MacKenzie is preparing a BEST grant application for window replacement and the installation of safety film, which he said would cost $90,000 to $100,000. He also said head custodian Ken Petersen is working on a facility management plan, so that repairs and replacements are made in a timely way and so the school can plan money for those; that plan is part of the grant application.

MacKenzie said the school is now taking bids to repair the structure where a wall blew down during the wind storm on January 5. The specifications are together, and he plans that bids will be reviewed toward the end of the month. However, he said, “We are six to eight weeks away from seeing something in place.” The issue is the structural soundness of the original design. He said a new wall will need to be tied better to the existing structure.

He said the bridge had also been examined by a structural engineer. Although it seems all right now he wants the bridge to continue to be looked at to ensure that it is stable.

Taylor brought up a recent news item regarding students protesting standardized testing. She had heard about students’ “testing fatigue” and questioned whether exemption from assessment is something that Gilpin would be considering. MacKenzie responded, “It [testing] is a time drain, but we get good information on comparing our students with others across the state and how they are doing on what they are supposed to know.” He said it would be at the Board’s pleasure regarding this issue. He added that it was a stagnant year on accreditation and said if Gilpin’s students do well on tests this year, the school could ask that its accreditation rating be raised.

The next meeting is scheduled for Monday, February 2, at 7 p.m.

END_OF_DOCUMENT_TOKEN_TO_BE_REPLACED

Where the dead get to tell their story By Jaclyn Schrock On Saturday, August 21, the Gilpin Historical Society held their annual Cemetery Crawl. Tickets allowed the shuttle of hundreds of guests from the Teller House parking lot to the Cemetery. Depending on v... END_OF_DOCUMENT_TOKEN_TO_BE_REPLACED