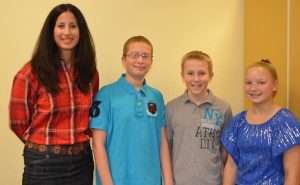 Caleb Murphy, age ten, was the December recipient of the Gilpin County RE-1 Board of Education Artist Recognition award, for his “Mustache Monthly” magazine cover self-portrait. Caleb explained, “I drew myself wearing a straw hat and a Fu Manchu mustache.” Art teacher Curt Halsted said groups of students collaborated on ideas for magazine covers, and this was the idea Caleb’s group came up with.

Ella Lindenthaler, age eight, was the November artist. She was unable to be present, but was honored for her self-portrait also.

Donaldson thanked the middle school choir for singing at the Gilpin senior citizen’s Thanksgiving luncheon. Holmes added that the group sang well at the Winter Arts Festival at the Gilpin Community Center and the Tommyknocker celebration for the elementary students at the Teller House on December 6.

Holmes presented a $5,000 check from his company as a donation to the Gilpin County Education Foundation (GCEF). Holmes is president of the GCEF; Superintendent MacKenzie, a member of the Board of GCEF, accepted the donation on the Foundation’s behalf.

Secondary science teacher Victoria Stephens was present with three members of her class to field questions from the Board about their “flipped” classroom, a model in which the traditional lecture and homework elements of a course are reversed.

Blake said, “I like the flipped classroom. We can work at our own pace and get ahead.”

Cooper noted, “We’re always moving forward. If we don’t get something at home, we can ask the teacher the next day.” He explained that students can check their own proficiency level by the rating they receive on questions they answer. He talked about a lab done recently on Newton’s third law.

Stephens commented that the flipped model doesn’t work with every student. She uses more traditional methods with some students, but says the flipped arrangement works well for those who are self-motivated.

MacKenzie praised Stephens as an excellent teacher and one who is depended on to train other teachers.

Miscellaneous revenue was increased by $9,500 to $22,500, due to funds received from the County that had been held for the past several years.

$17,658 was received in additional state funding through the READ Act.

State equalization increased from $1.99 million to $2.17 million as a funding adjustment because of the student count of 373.

$7,500 was received in additional state funding through a grant.

$14,810 was transferred from the bond fund for the final payment and close-out of the bond account.

Preschool tuition was reduced by $20,000, because there are not as many preschoolers this year.

An additional $7,400 was transferred to food service from the general fund, so that the total transferred was $88,380. Scharg noted a revenue decrease of $2,200 and an expense increase of $5,200. The apparent reason was that students don’t like the new lower-calorie offerings required by federal guidelines, and they aren’t getting enough to eat. Middle school students receive the same size portions as elementary students. Some students are bringing their own lunches. Holmes suggested that food services director Jane Yerkman might visit Boulder Valley, which he said is doing a good job, to get ideas on ways to more efficiently and creatively meet federal guidelines.

An additional $16,760 was transferred to the transportation fund, bringing that to a total of $124,563 transferred. The addition of baseball, track, and wrestling teams, with a need for more bus usage, accounted for the increase. Extra was also needed for tires and insurance.

$20,500 was added in adjustments for special education tuition for student attendance at Clear Creek.

$10,500 was returned to the budget for lower student attendance than estimated at Warren Tech.

$20,000 was added in computer hardware and software maintenance and upgrades.

An expense of $4,000 for wax for the new gym’s floor was added in custodial supplies.

$16,710 was added for Chromebooks for students.

MacKenzie distributed information about a new marquee that would fit in the existing sign posts in front of the school. The custodians would install the marquee, and an electrician would connect it. The marquee scrolls and is backlit at night. Sarah Swanson is working on obtaining donations for the sign, although the full amount is included in the budget the Board approved. A vote will be taken at the next meeting, with the project likely slated for next spring.

MacKenzie reported that teacher training is in progress, including technology workshops, formative assessment training, how to teach reading and literacy, and plans for Technology Boot Camp.

Work continues on upgrading and restoring the computer network. Final upgrade will be the installation of new wireless access points, to be completed January 15.

Bids are being considered on an upgrade for windows in the elementary school, with safety film to be installed on all ground level windows. A grant application for the window upgrade will be submitted in January.

Donaldson said scholarship packets will go out with the seniors before the holiday break.

Donaldson attended the AVID national conference last week and will be working with the school’s AVID site team on some new ideas for the program. She is excited to transform the students to digital binders.

Staff attended the final training of “Technology Instruction that Works.”

Eldred expressed appreciation for an outpouring of community support, noting that the Isle of Capri made Christmas donations for 12 families, and an anonymous group had adopted three families with food and gifts.

Ellen Hunter, literacy specialist from the Colorado Department of Education, has been meeting with the staff to support professional development in reading.

The Colorado Department of Human Services will conduct a routine site visit in the next couple of months.

A staff meeting was held on improving elementary report cards. Teachers will be given training on efficient use of the Infinite Campus grade book.

Teachers were to view a presentation on December 17 by a cohort group of teachers on using technology with classroom instruction.

Staff members are preparing for the winter STAR Interim/Benchmark assessments. The information will be used for future intervention and extension lessons.

END_OF_DOCUMENT_TOKEN_TO_BE_REPLACED

Benefitting the county, schools, and much more By Don Ireland   This year marks the 30th anniversary of casinos opening in the former little mining towns of Black Hawk, Central City and Cripple Creek, Colorado. In those early years, smoking was allowed inside ... END_OF_DOCUMENT_TOKEN_TO_BE_REPLACED