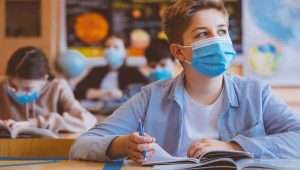 The most recent board meeting on September 15th, featured communication about in-person school, starting on the 21st. There were some concerns from teachers that were brought up in community discussion. Luckily, during the principal’s reports many of the concerns were addressed. Following the principal’s reports, further discussion and questions were brought up and answered. Principal Heather Huntoon and Superintendent Dr. Dave MacKenzie wrapped up the meeting.

Many teachers spoke up about their concerns for in person school. Teachers expressed their concern in a letter earlier in the week. The letter highlighted concerns about temperature checks, class sizes, and lunch time eating arrangements. It also spoke to the fact that students would oftentimes not be 6 feet apart, an important piece of in person school that parents should know. The letter which was given to the administration did spark changes in protocol. Still, teachers personally expressed these concerns during the board meeting. Elementary teacher, Hamilton, stated off by thanking elementary principal Heather Huntoon. She explained how teachers work will double if not triple. Accordingly, she emphasized the need for a planning period.

Sue Henry, Spanish teacher, explained the letter and recent changes in entirety. “Originally, I was going to read a letter in its entirety that a group of teachers composed and signed that we sent to you, the school board. There were three items we wanted addressed and we wanted the letter to go on the record and be heard by the community. There have been some modifications to our protocol since we sent that letter, so now I will read or mention parts of the letter, and comment on the changes that have been made. The first item has to do with students eating lunch in our classroom. […] The change we received today is ‘“we will be doing lunch in larger areas.”‘ We will get details about that before Thursday. However this change does not negate the CDC’s report about eating in public areas and positivity rates. The second item in the letter sent to you stated that we were concerned students were going to be walking through the school unattended and we were going to be doing a health screening after they entered our classrooms. The change is now we will be doing it in the atrium. This is not better, this is worse. Teachers will be doing health screenings in groups as the students enter. We will now be exposed to the entire student population and we will not be in our classrooms when the students get there. The third item has to do with the number of students in our classes. Here is part of the original letter, ‘“at the last board meeting the most up to date information led to estimates of in person class sizes ranging from 9-12 students. Parents should know that classes at the middle and high school level will be around 20 students per class. Students will be three feet apart at most. Parents need to be able to make an informed decision based on the new numbers.”‘ My statement at the end: teachers are expected to spend eight and ½ hours with no break being exposed to students. We are happy to do it if we can keep ourselves protected within our rooms. We should not be required to expose ourselves further by doing the temperature checks or by requiring us to do lunch duty in a large room with unmasked students. We want to teach! We want to teach in a safe environment.”

After public discussion, Gilpin principals shared valuable information about in-person school. Principal Alexis Donaldson began by sharing plans for the secondary. First off, she discussed current numbers. Commenting on the increase of students in person, she said, “Our numbers are very different today than they were a couple weeks ago. I would say the majority of our kids are coming back.” With so many kids back in the building, Gilpin incorporated a block schedule which is much different from the normal eight classes a day. Along with that, kids will have mask breaks outside and in the hallway, still socially distant. Remote students will have the same schedule and learning plan. Next Donaldson addressed teachers concerns. In response to the issue of temperature screenings she said, “I am still working with the temperature checks. Bottom line is we only have so many people. […] I do need to have teachers do temperature checks – that’s the reality. I don’t know a way around that.” As such, her new plan is to have teachers take temperatures outside the atrium door. However, Sue Henry, Spanish teacher, raised concerns about being exposed to the whole student body. Given that, the protocol could change. As for the concern about students eating in the classroom, Donaldson plans to have students eat in different and larger spaces. Other measures such as alternative teaching spaces, and handwashing stations will be put in place.

Next Heather Huntoon gave her report. She began by discussing teacher concerns. Instead of taking temperatures in the classroom, students will be checked at the main door. Additionally, elementary teachers will get an hour and fifteen minutes of planning a day. Much like the secondary, numbers keep on changing; however, class sizes are smaller in the lower grades. With small class sizes Huntoon plans on blending grades to fit teacher and student needs. Elementary students will eat in the MPR, socially distant. To keep kids safe, sanitary products are on the way, and cohorts; grids; and pods have been established. As a last note Huntoon shared some thanks , “I am very grateful and appreciative of Patrick, Kathy Kelly, and Lynda for taking on those extra roles and I am grateful for everything the staff is doing and I understand their concerns. […] I hope that once the anxiety… we’re over that, and we are back in school, and where back in learning that it does get easier. […] It’s just going to be a learning curve for all of us.”

Nearing the end, the board held discussion about in-person school. Following principal reports and teacher concerns, the board thanked everyone involved. “I want to thank everyone who is making […] a great effort… sense everything [involving] following the guidance has been laid out to us. I appreciate everyone’s efforts,” said Board Member Steve Boulter. Joe Marr and the rest of the board responded and also expressed thanks. Board Member Sarah Swanson asked if parent volunteers would be welcome to help teachers. Dr. Dave answered her question. He explained how they will have to wait and see. Board Member Tracy Krug, asked about the number of hybrid students. There will be 14 in elementary, and eight in the secondary. Still, numbers might change. Once those questions were answered, a few exciting announcements were brought up. On days when teachers usually have professional development, instead teachers will have time just to work. Furthermore, the Black Hawk/ Central City Sanitation District will be connected to the Gilpin Schools sewer system. Lately, the board discussed a new tax levy – one that would greatly with school funding and provide support during the pandemic.

The Elementary Principal and Superintendent closed the board meeting with a few more comments. Heather Huntoon shared her desire to work with the staff and support remote learners. She praised the staff on their amazing problem solving skills. Secondly, Dr. Dave voted to move board meetings to in-person with safety procedures. The board agreed. He also noted that the school is losing funding because the number of students was still at a deficit compared to last school year. As a last note, he shared his appreciation for the teachers.

All in all, in-person learning is shaping up to work. With teachers fighting for their safety, and the administration and board working to appease their students and parents, everyone will be a part of keeping in person school safe. This will be especially true now that everyone is on the same page with questions answered and the needed information given out. The September 15th Board Meeting helped prepare everyone for in-person school.

END_OF_DOCUMENT_TOKEN_TO_BE_REPLACED

Benefitting the county, schools, and much more By Don Ireland   This year marks the 30th anniversary of casinos opening in the former little mining towns of Black Hawk, Central City and Cripple Creek, Colorado. In those early years, smoking was allowed inside ... END_OF_DOCUMENT_TOKEN_TO_BE_REPLACED

Where the dead get to tell their story By Jaclyn Schrock On Saturday, August 21, the Gilpin Historical Society held their annual Cemetery Crawl. Tickets allowed the shuttle of hundreds of guests from the Teller House parking lot to the Cemetery. Depending on v... END_OF_DOCUMENT_TOKEN_TO_BE_REPLACED