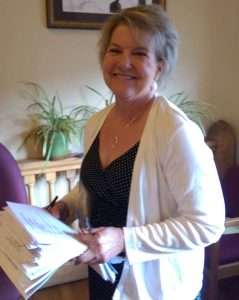 The previous regular meeting of the Gilpin County Board of County Commissioners was on July 11, 2017 when the upstairs room in the old Courthouse on Eureka St in Central City had many more residents in attendance to give their comments to that agenda. The three districts commissioners also met in work sessions that same Tuesday, and again July 13th and 19th to tidy up other business.

Tuesday, August 1, 2017 with cool temperatures and much moisture found the flags hanging limp for this Gilpin County Board of County Commissioners Regular Meeting.

Gail Watson, Chair of the Board, called the meeting to order, recognizing this a Colorado Day, celebrating our states entrance into the United States of America, August 1, 1876.

The Commissioners present included Gail Watson – District #3, Linda Isenhart – District #2, County Attorney Jim Petrock, and Deputy Clerk Sharon Cate. Ron Engels – District #1, was absent from this meeting, however the commissioners can still hold legal meetings with at least two or commissioners present. As the meeting progressed, Watson generally introduced each item on the agenda, both discussed it with the presenter, and Isenhart then made a motion, Gail seconded the motion and they voted, with Commissioner Engels out.

County Manager Leslie Klusmire participated in her first Commissioner’s meeting, having just started in this position a week earlier. Staff members in the county are expecting to be less burdened to manage affairs now that Leslie Klusmire came on board. There had been a vacancy in the County Managers position for three months after Roger Baker retired late in April. Thanks to all those who stepped up to keep Gilpin County running smoothly.

Deputy Clerk Sharon Cate had posted the agenda online at the county website on Friday, July 28th, along with the agenda for the annual Gilpin County Board of Equalization scheduled to meet immediately after the close of the Commissions Regular meeting. Changes to the agenda were to include items to be added after the Commissioners Status Report giving notice of Public Meetings – additional Fair Parking, Red Tail cabin purchase, Resolution #17-19 Combatting Climate Change, and Moon Gulch snowplowing.

There were no public or press comments, so Gilpin Finance Director, Clorinda Smith, came to the table to explain Resolutions #17-13 and #17-17 Heavy Equipment Lease/Purchase. She began by reminding everyone that this has been a long process to assemble and deliver this heavy equipment. The board will simply need to sign the documents to complete this part of the lease/purchase agreement. The first truck parts have now become available to add the second part which comes from a different vendor. Resolution #17-17 is in regard to the chassis, engine and driver’s cab of the multi-use utility vehicle from McCandless Truck Center for $163,271. Resolution #17-13 makes it possible to add the second part of the truck with the four different parts to be put on the chassis for winter or summer needs being a water tank, plow or grader with wing, dump bed and sander. The resolutions passed and a pay voucher was signed.

The next item was explained by Sharon Cate, saying that this previously passed Liquor Tasting Application for Mid County Liquor simply was to change a date on the application that listed two dates each month of 2017. They wanted to change the August 12th date to August 19th. This was approved.

Gilpin Clerk & Recorder Colleen Stewart presented her monthly report, and explained that Black Hawk is responsible to create their own language for voters and ballot issues as part of the Intergovernmental Agreement for Election Services with Gilpin County. Ms. Stewart suspected that there may be confusion by Gilpin residents wondering if everyone is to vote on taxation. To clarify, only Black Hawk city residents will be voting on that tax proposal for the city. The City of Black Hawk is also declaring that they will be able to provide a state mandated certificate of authenticity for the vote that will not be electronically counted, but be hand counted instead since they have such a small number of voters. Gilpin County Commissioners accepted the request from the City of Black Hawk.

Sheriff Hartman said Gilpin was the last in the area to rescind fire restrictions, which was County Resolution #17-14. Commissioner Watson suspected by September it would have to be implemented once again. Sheriff Hartman agreed it would be easier to leave it in place, but to comply with the other agencies, the board passed the resolution the allow fires again, knowing that it will be hard to find anything to burn with so much rain we have recently received.

The board discussion of the Ballot Question on Excise Tax on First Sale Marijuana Cultivation began considering potential tax revenue a single marijuana cultivation operation may generate, should the voters approve. There did not appear to be immense amounts of potential with the measure to begin January 1, 2018 as Jim Petrock verified. Since Gilpin County has not permitted commercial growing until now, the state tax has not been available here. That is why the measure is to go to our County Voters, to permit the state required tax. Discussion about investigating how other counties are approaching this topic has been agreed to individuals at the table to pursue before the election. The Board agreed to put the Excise Tax on the ballot for November 2017.

Jim Petrock added updates about the Constitutionalist group that has challenged more than a few counties in Colorado since 2016. Gilpin County is one of the counties this 6-member group targeted by filing a lean on the County for $254,708,582. Yes, the figures they compiled totaled over two hundred fifty four million dollars claiming that the county was incorrectly bonded. When Denver, Boulder, Gilpin, and other County agents refused to provide funds to Fidelity Information, a California collection agency, this Constitutionalist group would send collection requests of the funds to the individuals in those positions in the county. Jim Petrock gave updates on the trial dates now set for this crazy problem since Petrock as County Attorney had received such notice at his home. County Treasurer Alynn Huffman received hers at work, Coroner Zane Laubhan and Sheriff Bruce Hartman also received personal requests for funds threatening their credit reports if not paid. The FBI became involved when judges made decisions about this group, so one Colorado Superior Court Judge, Daucette, is now in jail as one of the six members of the Constitutionalist group. Mr. Petrock informed the Commissioners during Ms. Stewart’s report that he would be representing those in our county who were requested to pay funds at the two week trial in Denver, September 18-29th. More information to come about this issue and a Mr. Nalty, who presented his petition for funds at a Commissioners meeting last year.

Leslie Klusmire’s report was a surprise to the Commissioners. Watson commented with appreciation that she had not seen this kind of report previously. The June 2017 report for Department of Human Services numbered individuals and households served by Child Welfare, Temporary Assistance for Needy Families, Medicaid, Food Assistance, child care and others. For County-only programs so far in this 2017 year, numbers of different people who receive senior services as well as the number of meals and various transportation assistances have been provided was quite telling of those well served.

The jail tour is planned for Thursday, Sept 7.  With the next regular meeting being August 15, Linda asked if preparations for the fairgrounds had begun, anticipating many guests to the county Fair, Aug. 19-20th. Public Works and Facilities Director, Bill Paulman, assured her that had all been scheduled. Commissioner Isenhart offered her services to sweep or rake as needed.

Little discussion occurred about the two page resolution affirming Gilpin County’s commitment to the Paris Climate Accord. Resolution #17-19 was approved.

Snowplowing for Moon Gulch was discussed extensively, without reaching an understanding that only winter plowing and not summer road maintenance would occur in this area. Apparently signs about maintaining portions of a non-maintained county road had not been removed after disabled residents had moved away and a fence was erected on a property line that made the 14 foot wide plows difficult to avoid damaging property. Home owners are seeking plow service and the county was not able to commit to that until a few other issues had been addressed.

Commissioners Meeting Minutes were discussed for any changes. The regular meeting had only one change from a plural reference to a singular regarding drones. The other three work sessions needed little changes. All minutes were accepted for July 11, 13, and 19, 2017.

Extension Assistant/Fair Coordinator Heather Pierce brought a request to the Board to allow temporary overflow parking for Gilpin County Fair, August 19-20th, across the street from the fair grounds at Christ the King Church parking lot. The board approved the offer for extra parking.

The Red Tail Cabin proposal progressed with the approval of the $2,400 appraisal.

Nathan Walker presented a Jefferson Workforce Development plan (MOU) in regards to the Workforce Innovation and Opportunity Act (WIOA). The plan establishes a Tri-County Workforce Development Board (WDB) with Jefferson County, Clear Creek County, and Gilpin County by and through each County’s Board of Commissioners. Partners include Division of Vocational Rehabilitation, Department of Labor: unemployment insurance and Veterans programs, School Districts, Red Rocks Community College, Department of Human Services, and a few more. Discussion followed about how other counties have worked with this, and then the MOU was approved.

The annual meeting was scheduled for 10:45 am with these elected Commissioners then acting as the Gilpin County Board of Equalization. In this capacity they hear the Ruling of the Hearing Officer’s recommendations. When a county property owner receives their statement of property value issued from the County Treasures Office, they can enter a dispute of the value. The County Appraiser then considers their request and sometimes has an outside agency do another appraisal of the property. After the considerations, the Hearing Officer makes a recommendation the Board of Equalization, who accepts the recommendation or denies it. All decisions are then passed on to the state to make the final conclusion about the value of the property.

Each of the 11property disputes were discussed, using all three methods to approach decisions set up as the official process to dispute property value. All recommendations were accepted by the board. Six requests for an adjustment were denied by the Hearing Officer, one adjusted to increase the value of the property by approximately $28,000, while four adjusted the value for an approximate total of $150,000 less for the property value.

A work session immediately followed the Board of Equalization meeting. Some discussion continued about the Apex County Facility and the ability for Timberline FPD to make fire protection available to the area known as No Man’s Land.

The next meeting of the Gilpin County Commissioners will be on Tuesday, August 15 at 9 am in the upstairs room of the Old Courthouse in Central City.

END_OF_DOCUMENT_TOKEN_TO_BE_REPLACED

Where the dead get to tell their story By Jaclyn Schrock On Saturday, August 21, the Gilpin Historical Society held their annual Cemetery Crawl. Tickets allowed the shuttle of hundreds of guests from the Teller House parking lot to the Cemetery. Depending on v... END_OF_DOCUMENT_TOKEN_TO_BE_REPLACED

Benefitting the county, schools, and much more By Don Ireland   This year marks the 30th anniversary of casinos opening in the former little mining towns of Black Hawk, Central City and Cripple Creek, Colorado. In those early years, smoking was allowed inside ... END_OF_DOCUMENT_TOKEN_TO_BE_REPLACED