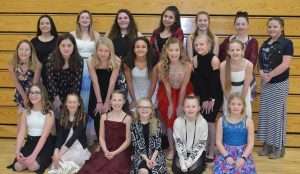 Awards banquet an evening to remember

Formal wear … tablecloths and centerpieces … chocolate-dipped strawberries and sparkling cider in plastic champagne flutes … a gentleman to escort the ladies. Such elegance is more like a night at the Oscars than a rural middle school sports award program.

Nevertheless, Gilpin Middle School girls’ basketball supporters went all out to make it an evening to remember for the young ladies of the hoops squad.

The event took place on Monday evening, March 5. After a team glamour shot in the school gym, the girls and their families adjourned to the atrium, where the Booster Club was helping with splendid buffet fare that the parents had prepared. Salad, garlic bread, and several pasta varieties were the main course. The dessert selection included a decorated cake, brownies, and tuxedo-decorated chocolate strawberries.

After feasting sumptuously, the guests adjourned to the auditorium, which had been lavishly decorated with balloons, red aisle runners, and gauzy red fabric draped across the stage. A slide show of season highlights preceded the main program, and a table stood ready with certificates and mementos of confetti-filled water bottles topped with charms. A program was provided with photos and statistics of each athlete.

Coach Brook Ramsey hosted the program. She thanked all supporters, especially the parents, who brought their daughters to practice each Wednesday morning at 6:30. The Booster Club got kudos for decorating the auditorium, helping with the meal, and donating prizes for the team fundraiser. Dostal Alley had supplied pizzas during the season. Ramsey also acknowledged Gilpin County Recreation, Lisa’s Mountain Memories, and the school transportation department for taking the girls to all their games.

The team managers, Kyla Ade and Brianna Godwin, were recognized for the many jobs they did to keep things running smoothly.

Special thanks and floral bouquets went to some of the parents. Terrye Lovett (“the team’s biggest fan,” Ramsey reported) came to the Summit Tournament and emceed at the gold game. Parents Linda and Bill Godwin came to all the functions and coordinated the food for the award banquet.

College student Andi Ramsey was acknowledged as “a huge help to the program. She ran the practices so I could work one-on-one with the girls. She also provided opportunities to watch the college girls and did a skills clinic.”

Katura Sales coached the B team and served as an athletic trainer and strength and conditioning coach. Sales ran the gold fundraiser, coached a 3-on-3 team, and put together the evening’s slide show.

Ramsey explained that the team focused on character this year rather than awarding a few girls with MVP awards. The team members voted on the trait they felt most exemplified their teammates, such as “encouraging,” “energetic,” “focused,” or “competitive.” There were also leadership council and fundraising awards.

The program listed the number of hours each girl played. “They are striving for 10,000 hours to be expert basketball players,” Ramsey explained.

As for the season as a whole, the A team finished with a winning 18-6 record, and the B team also did well with its 8-4 tally. Coach Kellie Bayne noted earlier this season that the girls played with some of the teams from the 5280 League before winter break. Then some girls played a second season with some other teams. They also had two tournaments in Summit County.

When it came time to present the awards, each girl was escorted to the stage by a young gentleman named “Caleb,” accompanied by pop music and a big-screen photo of the young lady. Her character trait was announced, and the coach spoke about her season progress.

END_OF_DOCUMENT_TOKEN_TO_BE_REPLACED

Where the dead get to tell their story By Jaclyn Schrock On Saturday, August 21, the Gilpin Historical Society held their annual Cemetery Crawl. Tickets allowed the shuttle of hundreds of guests from the Teller House parking lot to the Cemetery. Depending on v... END_OF_DOCUMENT_TOKEN_TO_BE_REPLACED

Benefitting the county, schools, and much more By Don Ireland   This year marks the 30th anniversary of casinos opening in the former little mining towns of Black Hawk, Central City and Cripple Creek, Colorado. In those early years, smoking was allowed inside ... END_OF_DOCUMENT_TOKEN_TO_BE_REPLACED