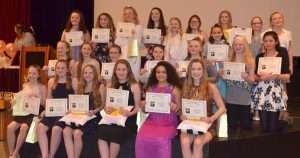 The “A” team girls started strong in the fall and were undefeated in the 5280 League, despite some key players being out with injuries, Ramsey said. In the 5280 League tournament, the team defeated Belleview 30-17 and Front Range Baptist 23-12.

After Christmas break, the team competed in the Summit Tournament against 3A and 4A schools, marching over Basalt, Summit and Craig to win first place and remain undefeated.

The ending season record for the “A” team was an amazing 24-1. A big reason for all that success was the number of hours practiced. Several girls had 100 hours or more. Avery Ramsey was credited with 200 hours, Tommie DiMauro with 300, Camryn Ganz and Faith Ramsey with 400, and Skyley Ramsey and Abigail Smith with 500.

The “B” team, coached by Katura Atherton, was 500 in 5280 League play and beat 3A Basalt and 3A Craig in the Summit tournament. The team was proud of this accomplishment, as it was the first time Gilpin’s “B” team has won a game at that tournament. “B” was also undefeated in the Frontier League and came home with a first-place win at the Frontier League tourney.

Kellie Bayne coached the “C” team and declared that their improvement was amazing. It was the second year that Gilpin has had the opportunity to include some fifth graders in its middle school program. The girls worked on specific skills and fundamentals, which will give them the tools they need to succeed throughout the middle school program. The young athletes had lots of time on the court, with several games and a tournament.

Ramsey advised, “We have taken a middle school girls’ basketball team to the Adams State Team Camp every summer for the past six years. Our eighth-grade leadership committee used this time to develop our team core values. Our mission is, ‘We succeed as a supportive family with precision, passion and dedication to our team.’“

The girls and their coaches are grateful for the community support and plan to give back this summer by volunteering with the Gilpin County summer food service program.