Published 9 years ago George Snyder9y ago 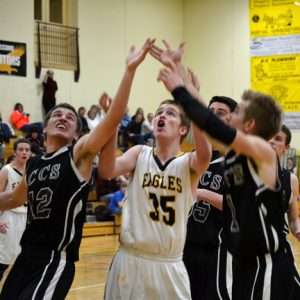 The Gilpin Men’s team scored their first 5280 League win by edging Denver Waldorf 43-40 in a squeaker last Tuesday at the Gilpin gym. The win, coupled with a 66-30 loss to league powerhouse Community Christian, gave the Eagles a 1-2 league record heading into the third week of league play.

The Denver Waldorf win avenged a non-league 38-35 defeat earlier in the year. Both games featured a 4th quarter rally by the winner.

The Eagles looked like they were headed for a runaway, enjoying a 25-9 half time lead. But in the 3rd quarter, Waldorf unleashed a devastating press that created many bad passes, and Gilpin found itself ahead by only 29-27 at the end of the period. The Spartan continued to apply the press, and the Eagles continued to have problems. With only two minutes left, Waldorf seized the lead at 40-37, and the noisy Gilpin crowd went silent. Then the Eagles’ offense came alive and on the next two possessions, leading scorer Chase Boulter cashed in the last of his 23 points to regain the lead. Waldorf failed to sink the basket on its next possession and, in the clash for the rebound, Dalton Dziedzic was fouled. He sank his two free throws and cinched the lead. All was not done yet as Waldorf got two shots at the basket in the last 7 seconds. The second shot, a 3-point attempt, fell to the right, and Gilpin recovered the rebound as the buzzer went off.  Boulter and Dziedzic, with 16 points, scored over 90% of the Eagles’ tallies. The game was a lesson in perseverance for the young Eagles and demonstrated their ability to respond to difficult circumstances and come through in the clutch.

The Friday game demonstrated another quality in the Gilpin team – the ability to keep fighting when the opponent is taller and more experienced.  For three quarters, the Eagles fought the Crusaders on relatively even terms, although they trailed 42-28 at that point. Then Community Christian applied a very aggressive full-court press, and the Eagles fell apart. Boulter once again led the scorers with 10 points.

In older news, the Eagles dropped their first league game, losing 70-24 to the Denver Jewish Day School Tigers at the JDS facility on January 15. The game was never close. Using a tenacious full-court press, the Tigers tortured the Eagles in three of the four quarters, roaring out to a 30-15 half time lead. At the half, the Eagles still had some hope for turning the game around because they outscored DJDS 9-7 in the second period. Before and after that, it was all Tigers! Boulter led the Eagles in scoring once again with 14 points. No other player scored in double figures.

The Eagles resumed league play Tuesday with a visit to Cornerstone Christian. Their next home game is this Friday against Belleview Christian. Both teams are about equal to Gilpin in experience and ability, so the games should be close and interesting.

END_OF_DOCUMENT_TOKEN_TO_BE_REPLACED

Benefitting the county, schools, and much more By Don Ireland   This year marks the 30th anniversary of casinos opening in the former little mining towns of Black Hawk, Central City and Cripple Creek, Colorado. In those early years, smoking was allowed inside ... END_OF_DOCUMENT_TOKEN_TO_BE_REPLACED