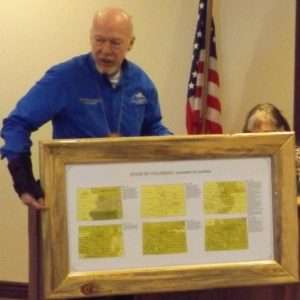 A crack of the gavel promptly at 9:00 am by Chairman Ron Engels signified the start of another Gilpin County Board of Commissioners meeting February 6th 2018 edition. Joining Commissioner Engels were Commissioners Isenhart and Watson. After the usual Agenda Review and Public and Press Comments, in which there were none, the Commissioners got down to business.

Sheriff Bruce Hartman presented to the Commissioners a historic map titled “State of Colorado, Evolution of Counties.” The map is divided into six sections displaying the original seventeen counties carved out of the Territory of Colorado, in which Gilpin was one of, to current with the most recent addition of Broomfield County. After the renovation of the Old Courthouse, the map is slated to be displayed in the Commissioner meeting room. Roy Blake of Black Hawk made the frame by hand out of beetle-kill pine. A similar map is currently displayed at the Justice Center.

Gilpin County Clerk & Recorder Coleen Stewart presented the December 2017 monthly report and the year-end annual report. There was nothing unusual in the December report, but the annual report shows that the Clerk & Recorder’s office took in over $440,400 in 2017 almost double that received in 2016 which was $230,800. The reason for the large spike according to Stewart, is the doubling of the license and permit fee from $2.00 to $4.00.

Annual Ambulance Inspections and Licensing
Gilpin County Ambulance Authority representative, Erin Gibbs, reported to the Commissioners that the annual ambulance licensure inspections for 2018 have been performed on six of the units. The inspections are being performed by the City of Black Hawk fleet technicians at the Black Hawk Fire Station. All of the units inspected were found to be in a mechanically safe operating condition with no concerns. All of the units are certified through to December 31, 2018.

Gilpin County Assessor Anne Schafer requested that the Commissioners approve the 2018 salary for Chief Appraiser David Kurronen. Korronen served as the County Appraiser for thirteen years before leaving in July 2017. Schafer is requesting the County rehire Korronen at the same rate of pay as when he was separated. Gilpin County Commissioners approved the proposal, though all sick leave and vacations accrual will be treated as a new hire per County policy.

Gilpin County Planner Danial Horn presented two Boundary Line Adjustment requests to the Commissioners. The first was BLA 17-05, located in Kingdom of Gilpin Unit #5, Lots 114A (vacant) and 117 (improved) on behalf of applicants Morgan and Amy Wells. Both parcels are owned by the Wells’ which will convey .46 acres onto Lot 117, there by widening the lot to accommodate the building of a proposed garage in addition to their existing house. Lot 114A will remain vacant and will remain a buildable parcel under this proposal. Gilpin County Commissioners approved BLA # 17-05 unanimously.

The second BLA involved two mining claims. Horn represented applicant Carl Schembri for Bonanza Land LLC in submitting BLA #18-01 which will remove the southwest corner of the Maldar Mining Claim #6148, which is currently landlocked and disconnect it from the Maldar Claim and add it to the Airline Mining Claim #840 to create a buildable parcel. This will eliminate any future variance requests. Both parcels are located along Alps Hill Road located southwest of Central City. After some discussion the Commissioners approved BLA# 18-01.

County Attorney Brad Benning discussed some ongoing legal issues with the Commissioners that he is presently attending to, including some water rights issues on North Clear Creek and with Dory Lakes.

After hearing the long list of meetings that the Commissioners must attend, Deputy Clerk Sharon Cate presented two candidates that applied for the Gilpin County Historical Preservation Advisory Commission (HAC). Scott Danfelser and Susan Meade both applied for the two vacant, three year term positions. After a review of Danfelser’s and Meade’s qualifications, the Gilpin Commissioners approved both applicants. Outgoing HAC member Rick Newman has requested that the Commissioners designate him as a “Director Emeritus” so that he may pursue funding to conduct video interviews with longtime Gilpin residents regarding the history of Gilpin County. County Attorney Jim Petrock advised Ms. Cate that there is no such designation and that Newman could continue this project as an unpaid staff or volunteer. One solution Ms. Cate proposed is to have Newman attend the February 20th meeting to discuss this further. The Commissioners did not vote on this item.

Project Manager Bill Harrington presented an update on the courthouse renovations. According to Harrington, the project is running about $52,000 under budget and slightly ahead of schedule. There were some unexpected plumbing issues that required attention and some surprises under the stair carpet when the work crews removed the existing carpet. Other than that, the renovation is going as smooth as can be expected when dealing with a one hundred plus year old structure. Total cost budgeted is $370,000. Cost to date (1-31-18) is $73,700.

The County is in the process of hiring a new Human Services Director and a Parks & Recreation Director. They have received plethora of well-qualified candidates for both positions. Currently they are screening twelve candidates and will select the final candidates for interviews.

The Wildfire Response Planning Committee is meeting weekly to discuss the County’s readiness and need of training to be prepared for a wild fire in Gilpin County. A review of the 2009 Community Wildfire Protection Plan indicates that it is significantly out of date. The Committee is working with Anchor Point, an independent fire consultant firm, to update the plan. Once the plan is updated, then the Wildfire Response Committee plans to select the most acute risk areas and construct additional operational plans to use during a fire event.

Klusmire presented a Request for Proposal (RFP) that will solicit proposals for the completion of a Facility Programming Study. The study will involve the Gilpin County Justice Center and the Gilpin County Public Health Department. Upon completion of the work defined in the proposal, the Board of County Commissioners will receive the information needed to make informed decisions as to the most cost effective and user serving way to plan for the needs of County functions. They should have a general idea of the best way to go forward with a development project and what facilities should be constructed and when. This information will include a minimum square footage for each function. With some level of certainty, this information will determine what additions or renovations are needed to the two facilities. After some considerable discussion, Commissioners approved the RFP.

Gilpin County Commissioners approved the meeting minutes from the January 9 and 23, 2018 meetings.

The regular meeting was adjourned at 10:54 am.

END_OF_DOCUMENT_TOKEN_TO_BE_REPLACED

Benefitting the county, schools, and much more By Don Ireland   This year marks the 30th anniversary of casinos opening in the former little mining towns of Black Hawk, Central City and Cripple Creek, Colorado. In those early years, smoking was allowed inside ... END_OF_DOCUMENT_TOKEN_TO_BE_REPLACED

Where the dead get to tell their story By Jaclyn Schrock On Saturday, August 21, the Gilpin Historical Society held their annual Cemetery Crawl. Tickets allowed the shuttle of hundreds of guests from the Teller House parking lot to the Cemetery. Depending on v... END_OF_DOCUMENT_TOKEN_TO_BE_REPLACED