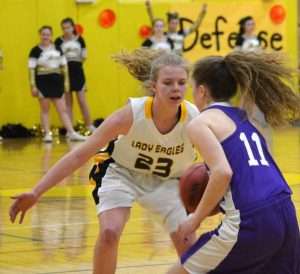 Gilpin County High School girls’ varsity basketball team edged past Rocky Mountain Lutheran (RML) 37-33 in a neutral playoff match on February 28 at Arvada K-8. The game was part of the 2015 1A girls’ basketball tournament for District 8 and nets the 5280 League championship title for Gilpin. The Eagles now prepare for the regional playoffs in Glenwood Springs this coming weekend, March 6-7.

The Lady Eagles have gotten stronger and flown higher with each game this season. Although they began with several losses, they turned around mid-season to beat the competition and emerge victorious in the district finals. Their record stands at 10-11.

A good-sized Gilpin crowd went to view the girls’ triumph over a strong RML, with its 19-3 record. Senior Delainey Lepro was named to the First Team All-League at last Saturday’s match. Junior Khristine Barr received an Honorable Mention.

Coach Jeff Schuessler declared, “If an all-tournament team were chosen, [senior] Alyssa Chareunsouk would have to be the tournament MVP. [Sophomore] Julia Blohm and [senior] Stephanie Siegrist teamed up to play stifling defense throughout the three-game tournament as well.”

Early in the first quarter, RML jumped ahead with 6 unanswered points. Gilpin countered with 13 points, keeping the lead until RML finally scored another 2 points near the close of the first quarter, which ended with Gilpin leading 13-8.

The Lady Eagles went on to maintain a constant but slim lead through most of the second and third periods, ending the third quarter with a 7-point lead at 27-20.

Early in the fourth quarter, Gilpin increased its lead to 12 points with a score of 32-20, but RML came back strong to cut that lead down to as little as 2 points in the final moments.

With less than one minute left on the clock, and with Gilpin leading by only 2 points, RML fouled Chareunsouk, who sank 2 free throws. That gave Gilpin the win for the 5280 championship title.

The whole team put in a stellar performance. Chareunsouk slammed a blistering 15 points to lead the Eagles. Lepro put in a great contribution with 13, and Barr dunked 9 points. The same trio made 5 three-pointers and 8 free throws between them.

Julia Blohm contributed 5 assists. Siegrist was the leader in steals with 2, and Lepro had one block.

Sidney Glowicki led RML in scoring and was named that team’s Player of the Game.

RML came in with 2 three-pointers, 7 free throws, and 28 total rebounds.