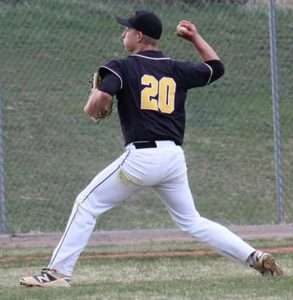 Action on the Diamond

This just in – Gilpin Eagles H.S. varsity baseball athletes soared past their opponents, the Rocky Mountain Lutheran Eagles of Denver, by a score of 11-5. The away non-conference game was played on Monday, April 23, at Northwest Open Space in Westminster and was Gilpin’s second win this season.

Gilpin’s first win was over the Denver Academy Mustangs (DA) on April 19, when Gilpin came in with the 7-6 victory in that away conference game. DA, like Gilpin, has had a bit of a down season.

The Eagles got things rolling in the first inning with four runs, while DA mustered one run. Gilpin scored again in the third inning and put up 2 more points in the seventh. The third and fourth innings belonged to the Mustangs, with 5 more points for them.

Lorenz was chosen Player of the Game, with 3 runs batted in, a sacrifice fly, 6 stolen bases, and 4 assists. As pitcher, he struck out 14 Mustang batters.

Trujillo had 13 putouts, followed by M. Gomez with 7.

The Eagles took a 22-0 loss to the Dawson School Mustangs of Lafayette on April 17. It was a home league game played at Dawson. Josh Trujillo was Gilpin’s Player of the Game in that contest.

Gilpin’s varsity track and field team enjoyed a good meet when they participated on April 17 in the Frontier League Qualifier at Clear Creek in Evergreen. The boys’ team placed eighth of 12 at the non-conference meet. Skyview (Thornton) placed first, and Clear Creek came in just ahead of Gilpin County with seventh place.

Jack Ball of Gilpin placed second in the 400-meter and 800-meter races. The Gilpin relay team came in fourth. Stephen King earned seventh in the long jump, and Austin Boulter achieved a sixth-place berth in the shot put and an eighth-place spot in the discus.

The Gilpin girls’ squad placed tenth of 12. Lena Warren ran to a second place win in the 3200-meter and a seventh place spot in the 400-meter. Teammate Nicole Adams earned fifth in the high jump and seventh in the 100-meter. Frederick achieved first place overall, while Clear Creek came in fourth.

END_OF_DOCUMENT_TOKEN_TO_BE_REPLACED

Where the dead get to tell their story By Jaclyn Schrock On Saturday, August 21, the Gilpin Historical Society held their annual Cemetery Crawl. Tickets allowed the shuttle of hundreds of guests from the Teller House parking lot to the Cemetery. Depending on v... END_OF_DOCUMENT_TOKEN_TO_BE_REPLACED

Benefitting the county, schools, and much more By Don Ireland   This year marks the 30th anniversary of casinos opening in the former little mining towns of Black Hawk, Central City and Cripple Creek, Colorado. In those early years, smoking was allowed inside ... END_OF_DOCUMENT_TOKEN_TO_BE_REPLACED