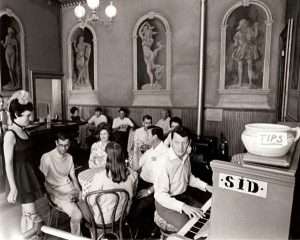 Celebrating and remembering our local heritage

On Monday, May 6, at 7 p.m. at the Ameristar Casino on the 10th floor, there were five large tables set for eight people each. A cash bar was set in an adjourning room where guests arrived and mingled, to celebrate the 50th year the Gilpin Historical Society, (GHS). Mayors of Central City and Black Hawk enjoyed the evening with others.

Oh, GHS loves to remember those brave adventurous souls, who came on foot with a wheel barrel, or a wagon and a team of mules from the east with great hopes after the Civil War ended. The vast territories still rugged and inhabited by migrating Native Americans, drew struggling farmers, with hopes of finding gold, just as John Gregory’s story told out west in the Kansas Territory in 1859.

Gilpin Historical Society seeks to remember how we got here and the people who made it all happen. Gilpin County is one of the 17 original counties in the Territory of Colorado, which split off from the Kansas Territory. Gilpin County initiated the notion of rich mineral reserves, revealed by Gregory Diggings (heard about a crossed the oceans) at 8,000 feet above sea level, in what became Mountain City, between what persevered as Central City and Black Hawk.

Some who lived through the Colorado Gold Rush days built small operations in the mountains developing technology to mine, building steam powered railroads, and communities to support the booming growth. Many others eventually gave up. It is these tales and legends which have been preserved by historical societies and history. Gilpin Historical Society has kept their main goal to preserve the history and educate others of the unique events that developed into what we see today in Gilpin County and neighboring counties.

In celebrating the 50 years of remembering Deb Wray, President of the Gilpin Historical Board of Directors, used a microphone to get everyone’s attention as there were many conversations occurring. She warmly greeted the regional historical supporters and asked the current Gilpin Historical Society Board of Director members and trustees of the 50th year of the Gilpin Historical Society to stand. VP Mike Keeler, Treasurer Lee Anna Jones, Secretary Brenna Schembri, and alternates Eric Chinn, Gary Huffman, Suzanne Matthews, Eric Miller, Coleen Stewart, Mary Peery, and Ed Schoenradt.

The meal began with a scrumptious salad, followed by a stuffed pasta entree. A desert table had many choices. The Ameristar’s presentation was a demonstration of the notorious quality Gilpin established with the Teller House in the 1870’s.

He related that GHS once entered a float with a giant cradle on it in the Gregory Days parade one May. Gilpin County is considered the “cradle of Colorado” bringing it to statehood with the mineral depots and rapid growth of the state. Another hope of researched data of the development of Gilpin County was expected to be found in the boxes donated to the GHS with the passing of a person who spent hours, weeks, months and years validating documented events. When the boxes were opened holding the research for a book, everything was in a code that could not be broken. History was lost.

This timeline is Dave Forsyth’s synopsis of his presentation following the 2019 fund raising dinner for the Gilpin Historical Society.

March 1959:  Emily “Emmy” Wilson, owner of the Glory Hole Tavern in Central City, leads the group that starts the first Gilpin County Historical Society.  They were mostly concerned with painting the buildings in Black Hawk and Central City in historical colors and getting rid of inappropriate signage.

August 14, 1963: Emmy Wilson dies in Denver and the historical society dies with her.

1969: Max Robb, postmaster of Central City, announces that the post office will be getting rid of old records and asks if anyone would like them. They have to be turned over to a non-profit.

May 5, 1959: Sid Squibb goes to Denver on his lunch break and files the paperwork to incorporate the new historical society. Shortly thereafter the postal records become the first donation to the new group.

1970-1971: Negotiations with the Gilpin County School District to lease the old high school in Central City to the historical society. They finally agree to a lease for $25 per year.

May 8, 1971: The Gilpin History Museum opens in the old high school. Ann Love, first lady of Colorado, dedicates the museum.

1976: The Gilpin Historical Society purchases the museum building from the school district.

May 6, 1976: Gilpin Historical Society float in the Gregory Day parade includes a large cradle since Central City was the cradle of Colorado.

1976: First of many box socials hosted by the Gilpin Historical Society.

June 10 and 11, 1978: First of several antique show and sales hosted by the historical society.

May 3, 1980: Gregory Day dance at the Belvidere Theatre hosted by the Gilpin Historical Society

Summer 1980: Quilting demonstrations by Eugenia Mitchell held throughout the season at the Gilpin History Museum.

1986: The Gilpin Historical Society purchases the Coeur d’Alene Mine from the Central City Opera for $10.

1988: Historical society begins running train from Central City to Packard Gulch and back, but quickly runs into problems with the people operating the train. Train is eventually parked at the Coeur d’Alene Mine and then sold to Central City.

1990: Historical society purchases the Thomas House and continues to operate it as a house museum. Makes a permanent enemy of longtime mayor Bill Russell, one of the founding members of the historical society.

1993-1994: Historical society uses a State Historic Fund grant to restore the Coeur d’Alene. The restoration is named the best historical restoration in the state in 1994.

2008: Historical society receives the Stroehle House in Black Hawk from the last member of the Stroehle family.

2010: Historical society purchases the infamous submarine from the estate of Bill Russell. Goes on permanent display at the Gilpin History Museum the following year.

Saturdays beginning June 15th, during Lou Bunch Days in Central City, GHS Wild Bunch will be making a racket near the Belvidere Theatre. This team of good and bad guys, will be seen and heard with shoot-out skits on the hour from 12-4 p.m. They will not be firing off their guns for Still in the Hills or The Wing Fest. They will also be absent from Main Street in Central City during Buffalo Bill Days in Golden, July 27th  where they will be doing re-enactments of local historical events. The Wild Bunch is just another way of keeping history alive on the streets of Central City.

September 7: 31st Annual Cemetery Crawl at Fairmount Cemetery in Denver. Tickets available beginning June 1 with a bus to shuttle Gilpin residents to Fairmont Cemetery where many of Gilpin’s history making people are buried. At least 10 lives will tell their own story of how they participated in events in Gilpin County, by re-enactors.

The Creepy Crawl is also scheduled for in the late fall. This is a spooky time as re-enactors tell stories of disturbing local tales.

Some family oriented activates are planned this summer rather than the traditional Victorian formal tea at the Stroehle House on Chase Street in Black Hawk. Possible activities include root beer float making, traditional lawn games, and others.

END_OF_DOCUMENT_TOKEN_TO_BE_REPLACED

Where the dead get to tell their story By Jaclyn Schrock On Saturday, August 21, the Gilpin Historical Society held their annual Cemetery Crawl. Tickets allowed the shuttle of hundreds of guests from the Teller House parking lot to the Cemetery. Depending on v... END_OF_DOCUMENT_TOKEN_TO_BE_REPLACED

Benefitting the county, schools, and much more By Don Ireland   This year marks the 30th anniversary of casinos opening in the former little mining towns of Black Hawk, Central City and Cripple Creek, Colorado. In those early years, smoking was allowed inside ... END_OF_DOCUMENT_TOKEN_TO_BE_REPLACED