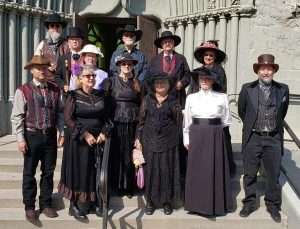 Gilpin Historical Society celebrated their 50th anniversary Cemetery Crawl Saturday, September 7, 2019. A cemetery crawl is a guided tour of a cemetery with storytellers revealing the likes of Gilpin residents, from their grave site. The storytellers gave many details and character to their stories. They were fascinating to experience!

This Cemetery Crawl was in Denver’s Fairmount Cemetery, the first time ever outside the many Gilpin County cemeteries. Cemetery and Creepy Crawls have been a way to retell local history through dramatized characters revealing how it really was.

Refreshing memories of Gilpin people, places and projects have been a fund raiser for the non-profit group, Gilpin Historical Society. Most colorful events are tangled in the processes of our mountains releasing mineral deposits found just before the Civil War began.

Often it was a challenge to dig a grave in Gilpin’s rocks and frozen ground. Long-time Central City undertaker Ed Harris prepared for burials in Gilpin or could send the deceased to their chosen resting place. At least one of the 10 lives re-enacted this past weekend in Fairmount was prepared by Mr. Harris. Others had moved from Gilpin before passing and found their way with their families to Fairmount in Denver. Others may also be found in Riverside Cemetery.

Fairmount has lush grass, tall trees, colorful flowers and currently, large white mushrooms. Most of the headstones have dates from the pioneer days in the areas we walked through to find our Gilpin people.

The chapel at the entrance was the gathering place for those who used the bus transportation from Gilpin with a ticket purchased in advance. Some people came from the Denver metro area that enjoyed hearing the tales of Colorado becoming a state. Everyone participated in the pre-tour orientation in the Little Ivy Chapel. Then, the guides took groups of a dozen or so to walk the grounds to the Gilpin Historical Society storytellers at a grave site with their name and dates on it.

There were two tents set up to get tickets, water, and information. One tent was for the Fairmount/Riverside Heritage Foundation and the other was the Gilpin Historical Society. Both had books and publications available, along with opportunities for upcoming activities.

Great attention and even questions were asked of the storytellers by the guests. Strolling between the historical characters, conversation between guests and tour guides often found common ground with people in the past and the places their stories occurred. It was thrilling to hear of similar trails and experiences that were shared. History seems to have some ways of repeating. We each recognized unique qualities in the ways we respond to the events that are new as times change.

(Thanks to Dave Forsyth)

Eben Smith (1831-1906) was played by Chuck Webster. Smith was a major mine owner and manager in Colorado. He started in mining in California after the 1849 gold rush, and partnered with Jerome Chaffee to have a stamp mill built and shipped to Central City after the 1859 gold rush. He arrived in Central City in 1860, and he and Chaffee owned several mines in the area before expanding operations to Georgetown. He later partnered with David Moffat and was involved in mining in Boulder, Leadville, and Cripple Creek until his death.

William Gilbert (1855-1901) was played by Tom Matthews. Gilbert was a miner in Central City. His wife and newborn twin sons died in Central City in 1887 and are buried in the IOOF Cemetery. He died of miner’s consumption in 1901 and was buried at Fairmount Cemetery. His family donated a set of folding chairs to St. James Methodist Church in his honor.

David Dulaney (1828-1917) was played by Mike Keeler. Dulaney and his family settled in Missouri Flats in the early 1860s. His daughter Clara’s grave along the Central City Parkway is the only reminder of Missouri Flats. David Dulaney went on to discover several mines in the Georgetown area, including the Hidden Treasure lode and several lodes on Red Elephant Mountain, and prospected throughout the western United States. He also served in the state legislature. He committed suicide at age 89 at his daughter’s house in Denver.

Ben Thomas (1866-1944) and Marcia Thomas (1865-1944) were played by Randy and Robin Schneider. Ben was born in Central City and worked for the Sauer McShane Mercantile in Central City, eventually becoming vice president and part owner. Marcia was born to a wealthy family in Denver. She and Ben married in 1895, and bought a house on Eureka Street in Central City in 1897. They lived in the house full-time until 1917, but kept the house as a summer house after that. When they moved to Denver in 1917, Ben still worked for different stores in Denver until retiring. They died a few months apart in 1944, and Marcia’s family inherited the Central City house, which they continued to use until 1987. In 1990 the Gilpin Historical Society purchased the Thomas House and has been conducting tours of it ever since.

Henry Teller (1830-1914) was played by Neal Standard. Henry Teller was a lawyer who came to Central City in 1862. He was a founding member of St. James Methodist Church, helped finance construction of the Teller House Hotel, and was heavily involved in a lot of other real estate and mining properties in and around Central City. When Colorado became a state in 1876, he and Jerome Chaffee served as the state’s first U.S. senators. From 1882 to 1885, Teller was secretary of the interior under Chester A. Arthur. He returned the senate in 1885, where he served until 1909, making him Colorado’s longest serving U.S. senator.

Louis Mack (1841-1926) was played by Stephen Weidner. Mack was one of the owners of the Rocky Mountain Brewery on Eureka Street in Central City. The brewery was in operation from 1861 to 1898. He was also an investor in Philp Zang’s Brewery in Denver. Mack moved to Denver in the early 1900s and built the Grosvenor Arms apartment building, which still stands at the 16th and Logan Streets.

Florence Sabin (1871-1953) was played by Kathi Baerns. Florence Sabin was born in Central City and lived there until she was four. After her mother’s death in 1878, she lived with a variety of family members. She graduated from Smith College in 1893 and taught high school science in Denver before enrolling in Johns Hopkins Medical School in 1896. She graduated in 1900 and started teaching at Johns Hopkins in 1902. In 1917 she became the first woman full professor at a medical school in the United States. Her research led her to become the first woman member of the National Academy of Science in 1925. In 1925 she went to the Rockefeller Institute in New York City, retiring from there in 1938. In 1944 she came out of retirement to write and campaign for new health laws for Colorado, and in 1947 became the head of Denver’s health and charities program. She retired from that in 1951, and died from a heart attack in 1953 while watching a Brooklyn Dodgers baseball game.

Lou Bunch (1857-1935) was played by Debra Tousignant. Lou Bunch was the last madam in Central City, operating her brothel on Pine Street from about 1900 to 1915. She was born in Sweden, came to Denver in the early 1870s, and went to work for Madam Mattie Silks as one of her girls. In the 1880s she made the move from prostitute to madam, owning several brothels on Denver’s Market Street before moving to Central City in 1899 or 1900. After leaving Central City in 1915, she owned a boarding house in Denver and helped take care of an aging Mattie Silks until Mattie died in 1929. Lou lived out her final years in an apartment in Denver near what is now Cherry Creek Shopping Center.

Aime Rapin (1865-1919) was played by Chuck Roberts. Aime Rapin owned a jewelry store on Main Street in Central City, Rapin’s Mineral Palace. He also had stores in Silver Plume, Oak Creek, and Denver. The family moved from Central City to Oak Creek in about 1913. He was killed in a car accident in 1919, and his family continued to operate the jewelry store for many years.

Caroline Bancroft (1900-1985) was played by Brenna Schembri. Caroline Bancroft was a newspaper reporter and historian. Her grandfather, Dr. Frederick Bancroft, was one of the founders of the Colorado Historical Society. She received a Master’s degree in English from the University of Denver in 1943. Her thesis was on literary treatments of Central City. She published many histories of Colorado, including the story of Baby Doe Tabor and several books on Central City.

–October 12 & 26 are Paranormal Night with the Spirits at the Gilpin Historical Museum, 228 East 1st Street, Central City, CO. This spooky experience has some tales of many sure they want to leave that encounter there, not to be followed home.

–October 18 & 19, and 25 & 26 will be the 11th Annual Creepy Crawl in Central City. This tradition of 1-hour guided footsteps through the creepy historic buildings of haunting season can be rather chilling between 7 and 9 p.m. A few walk-up tickets will be available, although advance tickets may be secured for $15 from www.Eventbrite.com. Every 20 minutes, tours find live characters re-enacting murders, ghost stories, gruesome, and creepy tales.

END_OF_DOCUMENT_TOKEN_TO_BE_REPLACED

Where the dead get to tell their story By Jaclyn Schrock On Saturday, August 21, the Gilpin Historical Society held their annual Cemetery Crawl. Tickets allowed the shuttle of hundreds of guests from the Teller House parking lot to the Cemetery. Depending on v... END_OF_DOCUMENT_TOKEN_TO_BE_REPLACED