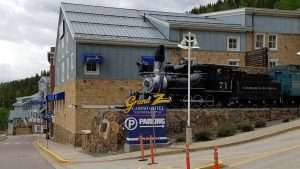 Council met with Staff for a work session to hear about proposed changes to the sales and use tax section of the City Code and to review the final proposed draft budget of 2021.

Mayor Fey led the Pledge of Allegiance and then asked for any amendments or additions to the evening’s agenda. Manager Miera added an item regarding train engine ownership for discussion to the agenda.

The Mayor called for a motion to approve the consent agenda which consisted of the minutes from the November 3rd meeting and regular bill lists through November 3rd. Alderwoman Laratta commented that they kept expenses way down this month and “they look real good.” Alderman Hidahl asked about an expense for $100.49 for a Staff Lunch for the Fire Department. Manager Miera responded that this was a working lunch while the department was working an incident on the Parkway.

Alderwoman Laratta moved to approve the Consent Agenda and was seconded by Alderwoman Johnson. The motion passed unanimously.

Mayor Fey opened the floor to the public for anyone who wished to speak to a topic on the night’s agenda.

Joe Behm, Executive Director for the Business Improvement District, addressed council and asked to clarify if action item number eight (Ordinance 20-13) is a first reading. Staff confirmed this is a first reading which means a public forum will be held at the second reading on December 1.

Deb Wray, president of the Gilpin Historical Society next addressed council, offering to be available during the train engine discussion (the newly added agenda item) for questions.

Council was presented with the Proposed 2021 Budget and considered action on one Ordinance and one Resolution.

The Proposed Budget is open for public review and comment and will be presented again as a final budget at the December 1st meeting. The revenues have been impacted dramatically due to the pandemic with gaming revenues decreasing by more than 45% and the 2021 Budget is taking a conservative growth approach to increasing revenues with a projected revenue of just over $3 million. The General Fund balance has decreased by $375,000 and Manager Miera stated the City is keeping service levels constant except for the Black Hawk Central City Shuttle service even though Fire Protection Services are being reduced by $32,000.

Alderwoman-Elect Kara Tinucci addressed Council and voiced her concern regarding a reduction in the Community Development budget and the considerable reduction of the 2020 Budget. Manager Miera responded that they took out certain code enforcement abatement projects and reduced expenditures in planning and legal expenses.

The Proposed Budget is available electronically on the City of Central’s website and hard copies can be requested. Council will accept comments from the public through December 1st.

Sales and Use Tax Overhaul

Attorney Marcus McAskin introduced Ordinance 20-13 which would repeal and reenact Article III of Chapter 4 of the City Municipal Code regarding Sales and Use Tax.

Adoption of this Ordinance does not increase taxes or create new taxes and does not require public voter approval. Adoption would also require a separate InterGovernmental Agreement with the State of Colorado which will be presented with the second reading.

Alderman Aiken asked if the City is currently collecting taxes from any internet transactions. Manager Miera responded that businesses that have permits are remitting taxes; however, there is no way to determine whether they should be remitting and how much.

Mayor Fey expressed concern that there seems to be opposition among council regarding certain provisions and Attorney McAskin recommended that they could set the second reading for the second meeting of December (December 15) to allow time for another work session.

Alderwoman Laratta moved to approve the first reading of Ordinance 20-13 and set the public hearing for Tuesday, December 15, 2020 and was seconded by Alderman Aiken. The motion passed unanimously.

Manager Miera introduced Resolution 20-42 which would extend the local declaration of emergency through Wednesday, December 2, 2020. Manager Miera commented that Central City moved to threat level yellow per the CDPHE on November 10, 2020.

The train Engine No. 71, parked next to the Grand Z Casino is currently owned by the City. An interested party, the Gilpin Historical Society, would like to purchase the engine or have it donated. Alderman Aiken voiced his concern that they don’t know Gilpin Historical’s intention and wouldn’t want it to be moved outside the County. Alderwoman Laratta spoke to Eric Chinn about the locomotive and he believes they are moving it to a locomotive museum and that Maverick Gaming wants to widen their entrance to their parking lot. Mayor Fey commented that his understanding is that Gilpin Historical would have access to grants that the City does not, and they would desire to refurbish it into a working vehicle. Mayor Fey commented he would never be in favor of giving up something of historical significance without a guarantee that the engine will be maintained and will be kept inside the County, if not the City.

Deb Wray was invited to speak and commented that the Gilpin Historical Society does not want the locomotive to leave the City, but rather be used to attract more visitors.

Joe Behm commented, “Deb brings up some really good points; activating anything historical and bringing in more visitors is a great idea. I would caution you that relinquishing ownership of artifacts is extremely problematic. I would be careful going about that.”

Alderman Aiken asked for an update on the number of COVID cases in Gilpin County. Sheriff Armstrong responded that there are currently 65 positive cases in the county and about 20% are casino workers that live in the county.

Aiken also asked if there is data on number of vehicles crashing into barriers or walls due to losing traction. Fire Chief Gary Allen responded that numbers have increased in part due to there being more vehicles on the road.

Alderwoman Laratta commented, “I wish everybody and happy Thanksgiving and everybody wear masks, please wear masks so we can see all of you next year.”

Mayor Fey opened the public forum for any topics anyone wished to bring up, but nobody took him up on the offer.

Council moved to enter Executive Session at 8:27 pm regarding the potential sale or donation of City owned property to the Gilpin Historical Society, and concerning a proposed temporary agreement to furnish augmentation water. The next regular Council Meeting will be Tuesday, December 1, 2020.

END_OF_DOCUMENT_TOKEN_TO_BE_REPLACED

Benefitting the county, schools, and much more By Don Ireland   This year marks the 30th anniversary of casinos opening in the former little mining towns of Black Hawk, Central City and Cripple Creek, Colorado. In those early years, smoking was allowed inside ... END_OF_DOCUMENT_TOKEN_TO_BE_REPLACED