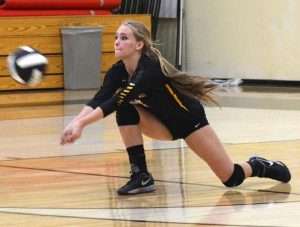 The Gilpin fans rejoiced in a 3-0 victory for their varsity volleyball team on Tuesday, September 6, as the Lady Eagles blew past the Jim Elliot Christian Warriors (JEC) of Englewood. Set scores were 25/14, 25/16, and 25/16 in the home non-conference game.

The home games are being played on Gilpin’s shiny new gym floor, complete with the “G” logo at mid-court and the intimidating “Elevation 8,945” emblazoned on each side to let opponents from the lowlands know why they are out of breath.

Freshman Jessica Wilhelm led Gilpin in kills with 11. She was followed closely by teammates Alex Martin (Jr.) with 10 and Kasen Nelson (So.) with 9. The team had a total of 32 kills.

Junior Cicely Lepro and Martin were first in serving aces with 5 each.

Nadeau led with 15 receptions, and Martin followed with 13. JEC’s total was 21.

The Lady Eagles took a 0-3 loss in their home conference match with the Highland Huskies of Ault on Thursday, September 8. The Huskies sport a 5-0 record this season.

Highland was ahead during the entire first set, with Gilpin managing to stay within a 3-4 point range until the final few minutes. With the score 16-14 Highland, the Huskies began to pull away from the Eagles. Gilpin was only able to put 2 points on the board from that time and were forced to watch their competitors push on to 25.

Action intensified with the second set. Highland put up a quick 3 points, but Gilpin answered, and it wasn’t long before the score was tied 4-4. The Lady Eagles moved ahead and stayed in the lead until it was 13-12 Gilpin. Then the Huskies began to press, tying the score at 13-13 and gaining a widening lead. In spite of a spirited fight, Gilpin never regained the lead, and the set closed at 25/20 Highland.

Set three saw the Huskies in command once again, although they blundered by making no effort to return 3 Gilpin serves. That spurred Highland to action, and they raced to a 25/16 finish.

Martin led the Lady Eagles with 8 kills, followed by Nelson with 4. Hobson-Kroll slammed 6 serving aces. Nadeau was tops in the digs category with 14, and Lepro came in with 12 ball handling assists. Nadeau was leader in serves received with 22; Martin had 15.

Gilpin’s football club visited Simla on Friday, September 9, taking a 38-14 loss to the host Cubs in non-conference play. The Eagles are 0-2; Simla’s season record is 1-1.

Simla dominated in the first half, racking up 12 points in the first quarter and 14 in the second. Both teams were scoreless in the third period, but Gilpin shone in the fourth quarter, running 2 TD’s and a conversion into the end zone.

Eagles’ Coach Craig Ball reported, “We had good game when considering our effort level. We just made some major mistakes on special teams, allowing two blocked punts and a mishandling of a kickoff that resulted in a fumble. Matt Immordino had a great game, rushing for 139 yards, with a touchdown and a conversion. Our young freshman Mateo Maldonado had a fantastic scoop and score in the fourth quarter.”

Gilpin plays Caliche at home on September 17 at 1:00 p.m. Homecoming will be September 23 at 7:00 p.m. against Belleview Christian.

Senior Immordino was the offensive Player of the Game, while Maldonado was defensive POG. In addition to his yards rushing and touchdown-conversion, Immordino completed 4 passes for 57 yards. Maldonado’s moment of glory came when he recovered a Simla fumble and ran for 60 yards for the score.

Another pass leader was senior Braedyn Perez, with one 54-yarder.

In rushing, the team carried for 185 yards, Immordino leading with 139. Eryk Lorenz (Sr.) had two receptions, gaining 74 yards. The Eagles’ total of passing, rushing, and receiving yards was 296.

Gilpin made 69 total tackles, 19 for a loss. Immordino made 7 solo tackles, Maldonado 6, Jake Duncan (So.) had 5, and Austin Boulter (Jr.) and Josh Trujillo (Jr.) contributed 4 each. Trujillo and Duncan also assisted on other tackles.

The Eagles put pressure on their opponent’s QB; Boulter and Jaime Alexander (So.) each made 1.5 sacks for the 19-yard loss to the Cubs. Alexander, Matt Immordino, John Immordino (Jr.), and Tristan Froio (Jr.) each hurried the quarterback.

No statistics were available for Simla.

END_OF_DOCUMENT_TOKEN_TO_BE_REPLACED

Benefitting the county, schools, and much more By Don Ireland   This year marks the 30th anniversary of casinos opening in the former little mining towns of Black Hawk, Central City and Cripple Creek, Colorado. In those early years, smoking was allowed inside ... END_OF_DOCUMENT_TOKEN_TO_BE_REPLACED