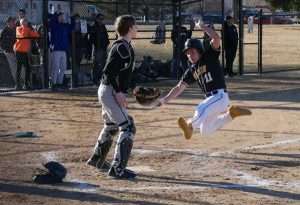 Gilpin High School’s varsity track and field squads traveled to Henderson on April 3 for the Thunderhawk Twilight Invitational meet. The boys’ team placed 12th out of 23 teams; Poudre was first overall. Senior runner Jack Ball placed second in the 400-meter dash, barely more than a second away from first place with a time of 52.78 seconds. Ball also placed fourth in the 800-meter.

The girls’ team did not place but got some valuable experience. Niwot took top overall honors for the girls’ teams.

The Rebel Roundup was held on April 6, with results unavailable at press time.

Here are the Gilpin results for the Henderson meet:

The Gilpin Eagles’ varsity baseball athletes have been disappointed in their attempts to come in with a win this season. Their record is 0-7, three of those being league games. This is where perseverance and the will to overcome adversity comes in. No doubt the players’ grit will be paying off soon.

The closest game in the past few weeks was a “home” conference match against the Denver Christian Thunder on April 5, when the Eagles took an 8-4 loss. The game was played at Denver Christian’s field, although Gilpin was the home team.

Angel Gomez was chosen Player of the Game for Gilpin, with one run and 7 put-outs among his highlights.

Josh Trujillo, Will Lorenz, and Chad Holmes also scored runs for the Eagles, and Manny Gomez slugged two hits. Lorenz and Johnathon Rust each had runs batted in. M. Gomez and Trujillo each had 5 put-outs, and M. Gomez and Lorenz contributed 5 assists apiece.

Other Battles on the Diamond

The Eagles bowed to the Highland Huskies of Ault on March 22, losing 12-2 in that away conference battle. Highland possesses a 7-4 record, 2-1 in league play. Highland started with 5 runs in the first inning and 5 in the second. Gilpin’s A. Gomez and Dallas LeBeau scored runs in the second and third innings, but that was it for the Eagles. Highland finished off with 2 more runs in the fifth.

The Longmont Christian Warriors hosted Gilpin on April 3 in another conference contest, winning against the Eagles 24-14. The Warriors are 3-3 for the season, with one conference win. Longmont pleased their fans with 2 homers, but Gilpin came on strong in the second inning with 6 runs and collected 3 in the fourth. Nearly the whole Eagles team managed runs in this high-scoring game. Only 4 Gilpin batters were struck out, while the Warriors had 11 strikeouts. Other highlights for Gilpin included 13 stolen bases by the team and 7 putouts by Holmes. Pitchers were M. Gomez, Holmes, and Lorenz, who struck out 9 batters. Lorenz was the Eagles’ Player of the Game.

Gilpin played the Cornerstone Christian Bulldogs of Westminster on April 7, going down 14-3 in this non-conference skirmish. The Bulldogs, with a 6-1 record, have yet to play any conference games but proved a tough opponent. They scored a daunting 12 runs just in the first inning. Pitcher Holmes was selected Player of the Game for Gilpin. M. Gomez scored 2 runs, while A. Gomez came in with 1. Trujillo had 2 RBI’s and Cooper Lindberg 1.

END_OF_DOCUMENT_TOKEN_TO_BE_REPLACED

Benefitting the county, schools, and much more By Don Ireland   This year marks the 30th anniversary of casinos opening in the former little mining towns of Black Hawk, Central City and Cripple Creek, Colorado. In those early years, smoking was allowed inside ... END_OF_DOCUMENT_TOKEN_TO_BE_REPLACED

Benefitting the county, schools, and much more By Don Ireland   This year marks the 30th anniversary of casinos opening in the former little mining towns of Black Hawk, Central City and Cripple Creek, Colorado. In those early years, smoking was allowed inside ... END_OF_DOCUMENT_TOKEN_TO_BE_REPLACED