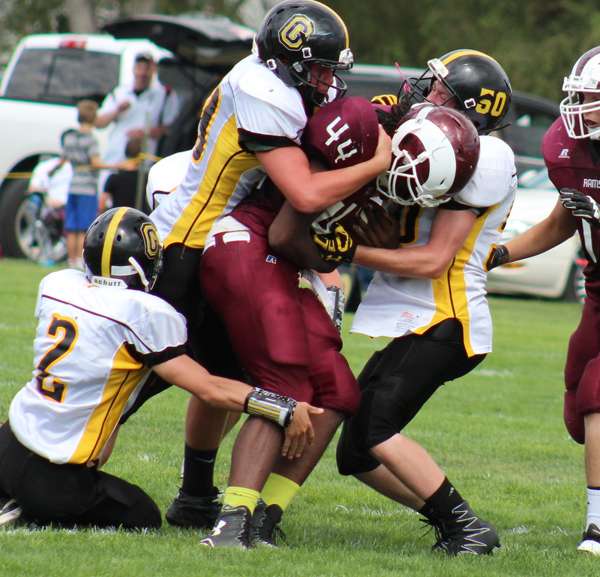 Gilpin Eagles High School sports season is off and running. The football and volleyball teams have begun their seasons in the 2A Mile High League this year, a change from the 1A 5280 League in previous years. The change is due to increased enrollment at Gilpin, so the school is now in the higher classification. It will prove challenging, as the teams will meet some new opponents.

The Gilpin Lady Eagles dominated in a scrimmage against Clear Creek on August 30. The junior varsity girls placed second in a tournament on the home court on August 31, winning over Nederland and Rocky Mountain Lutheran.

The Lady Eagles varsity players came out well at the West Grand (Kremmling) invitational over the Labor Day weekend. They clashed with the Peyton Panthers on Saturday, September 3, winning 3-0. Sets were 25/15, 25/15, and 25/17 in that neutral tournament game.

Of the Lady Eagle’s eleven players on the roster, they have only one senior, but are fortified with four juniors. Three sophomores and three freshmen make up the remainder of the team. Alexis Donaldson is head coach for the Gilpin team.

The Eagles football squad suffered a crushing loss 50-0 in its first away non-conference game against the Merino Rams on Saturday, September 3. Merino scored 25 points in each half of the game. Gilpin’s offense did not get much chance to put in a showing, but the defense worked at limiting the Rams.

Merino proved a formidable opponent. According to the high school sports website Maxpreps, the team has won 8 state championships, the most recent in the Class 8A in 2009. In 2015, they finished with a 6-4-0 record. They won over Lake County 42-12 on August 27.

Eryk Lorenz was named Player of the Game for Gilpin on defense. He made 9 total tackles, 1 sack for a 6-yard loss, blocked 2 pass attempts, and recovered 1 fumble.

In the contest with the Rams, Gilpin boasted 41 solo tackles and 20 assisted tackles. Austin Boulter was the top solo tackler with 8, followed by Eryk Lorenz with 7 and Jaime Alexander with 6. Mateo Maldonado and Matthew Immordino each had 5 solo tackles, and Immordino also assisted with 5 tackles.

Lorenz, Boulter, and Alexander had 1 sack each, with Tristan Froio assisting on 1 sack. The total yardage loss to the Rams was 13.

Lorenz and Jake Duncan both made fumble recoveries.

Of the 23 men on the team, 5 are seniors, 7 are juniors, 6 are sophomores, and 5 are freshmen. Lorenz, Immordino, and Manny Gomez are captains. Craig Ball is head coach for the Eagles.