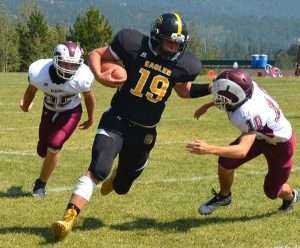 Football, volleyball off to promising start

Gilpin did not begin well. The score at the end of the first quarter was 27-0 in favor of the Rams, and it looked as though the game might be a blowout, as was last year’s 50-0 loss to Merino in the first game of the 2016-17 season. The Eagles got plenty of practice on kick returns during the first quarter of last weekend’s game, though.

It was too early for Merino to get complacent. Gilpin picked up a touchdown and a conversion by #19 Austin Boulter early in the second quarter to put 8 points on the board, and that got the team and the fans fired up. Merino also scored 8 in the second period, but the Eagles denied the Rams’ attempts to score at all in the second half of the game, a very good effort by the Eagles against the Rams’ traditionally state championship players.

#19 senior Austin Boulter was Overall Player and Offensive Player of the Game for Gilpin, leading with 212 yards rushing, 4 touchdowns, 2 conversions, and 7 tackles. He also completed one pass for 19 yards.

#45 senior Manny Gomez was selected as Special Teams Player of the Game, with 4 kicks for 177 yards and 4 kickoff returns for 91 yards.

The Eagles were also helped by fewer penalty yards than the Rams – 46 to 60 – including a call on Merino for interference on a pass by Boulter in the fourth quarter.

Other highlights included J. Ball gaining 46 yards in 11 carries and John Immordino receiving for 19 yards. The Eagles racked up 477 total yards, including 156 in kick returns.

Gilpin has only four home games this season, three of which are this month. The next home game will be on Saturday, September 9, at 1:00 p.m. against Simla.

“I am extremely proud of the girls for their performance at the West Grand tournament this weekend,” Head Coach Alexis Donaldson related. “We were able to win our pool and play Lyons for the championship match. I am looking forward to opening up our league season this Thursday at Highland.”

Gilpin played hard against the West Grand Mustangs in their first tournament round, but experienced a 3-2 loss. West Grand won the first set 25/21, but Gilpin took the lead in sets two and three with scores of 25/21 and 25/18. Fans were on their feet for the close fourth match, which Gilpin lost by only 2 points (26/24). West Grand swept the tie-breaker set 15/7.

Next, the Lady Eagles emerged the victors 3-2 in a well-fought match against the Cedaredge Bruins. Sets were 20/25, 22/25, 25/22, 25/16, and 15/10 (Gilpin shown first). Alex Martin was the leader in kills with 13, followed by Kasen Nelson with 9. Martin also came in with 6 serving aces, and Nelson contributed 1 solo block. The team had 118 total digs, with Aspen Nadeau and Cicely Lepro leading with 29 each. Lepro was tops in ball handling assists with 27, and Martin led in serves received with 24.

The Lady Eagles faced the Lions Lyons for the championship battle, losing 3-0.

The junior varsity won all of their matches in a round robin tournament at Gilpin on August 30, playing against Rocky Mountain Lutheran, Mile High Academy, and Nederland.

END_OF_DOCUMENT_TOKEN_TO_BE_REPLACED

Where the dead get to tell their story By Jaclyn Schrock On Saturday, August 21, the Gilpin Historical Society held their annual Cemetery Crawl. Tickets allowed the shuttle of hundreds of guests from the Teller House parking lot to the Cemetery. Depending on v... END_OF_DOCUMENT_TOKEN_TO_BE_REPLACED