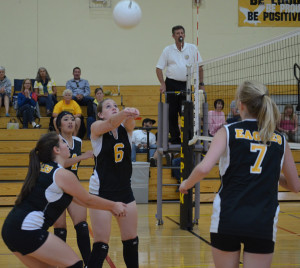 Gilpin County High School was the scene on August 29 of an invitational volleyball tournament. Gilpin’s varsity took third place, with a 2-1 record to begin the season. The junior varsity was fourth in the standings. Six teams participated in the tournament, including Gilpin, Nederland, Lake County, Denver Waldorf, Soroco, and Shining Mountain Waldorf. Varsity games took place in the main gym, and junior varsity games were held in the auxiliary gym.

The Lady Eagles varsity team defeated Shining Mountain Waldorf 2-0 at the invitational. Set scores were 25/17 and 25/23.

The Lady Eagles have an experienced team this year, with five of its ten players being seniors.

Freshman Cicely Lepro got the only serving ace of 48 total serves.

Hanssen and Siegrist each got 1 solo block.

Chareunsouk was the leader in digs with 11; Lepro followed with 5, and Planck and Deleon contributed 4 each.

Serving received success was led by Chareunsouk with 19.

Leader in kills was Siegrist with 7.

Junior Alexis Kennedy shone with 10 digs, followed by Lepro with 11, Chareunsouk with 9, Deleon with 7, freshman Alex Martin with 5, and Siegrist with 3.

Deleon was once again tops in ball handling assists with 10.

Serving received success was led by Chareunsouk with 9 and Lepro with 7.

Siegrist was the leader in kills with 5.

First in digs was Chareunsouk with 8; Kennedy Martin Lepro, and Deleon each had 4.

Deleon proved skilled again in ball handling assists with 13, and Chareunsouk showed 13 was the lucky number as well in serving received success.

The JV team placed fourth in the standings, but no details were made available.

END_OF_DOCUMENT_TOKEN_TO_BE_REPLACED

Where the dead get to tell their story By Jaclyn Schrock On Saturday, August 21, the Gilpin Historical Society held their annual Cemetery Crawl. Tickets allowed the shuttle of hundreds of guests from the Teller House parking lot to the Cemetery. Depending on v... END_OF_DOCUMENT_TOKEN_TO_BE_REPLACED

Benefitting the county, schools, and much more By Don Ireland   This year marks the 30th anniversary of casinos opening in the former little mining towns of Black Hawk, Central City and Cripple Creek, Colorado. In those early years, smoking was allowed inside ... END_OF_DOCUMENT_TOKEN_TO_BE_REPLACED