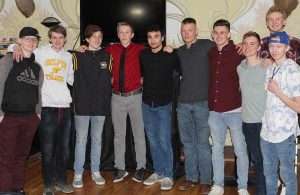 The Gilpin High School boys’ varsity basketball team celebrated its season with an awards banquet and program on Tuesday evening, March 12, at the Elks’ Lodge in Central City.

“The ‘student’ comes first in ‘student athlete,’ so I think it is appropriate to acknowledge the ‘student’ part first,” Hanson said when presenting the awards. He proudly announced that Gilpin’s team earned Academic All-State recognition. To qualify as an All-State team, the varsity players must have a 3.5 grade point average, and to qualify as a varsity player, a student must play a minimum number of varsity quarters. Six players met those requirements: Will Lorenz, Chad Holmes, Alex Wilhelm, Stephen King, Nolan Lindberg, and Blake Boulter. Holmes and Lorenz earned individual Academic All-State honors as well.

Hanson summarized several gratifying season wins. “Our guys scored 84 points and crushed Platte Canyon by 40 points early in the season, which was awesome. They followed that up a few days later by beating a good South Park team that had a 7-0 record at the time. Those were a couple of nice non-league wins.”

Gilpin is one of the smallest 2A schools in Colorado and plays in the toughest 2A league in the state. Despite a challenging job, the Eagles won their first four league games by beating Lyons, Front Range, Union Colony Prep, and Longmont Christian.

“It had been years since we beat Longmont Christian, so that was a great win and a decisive one, where we controlled the game from start to finish,” Hanson noted.

A difficult stretch against some tough teams followed, but Gilpin finally got a welcome road win against Denver Academy. The coach reported that Gilpin did much better at home than on the road and will work on that next season.

Gilpin beat Dawson on Senior Night. “Our guys played great basketball that night. I was proud of them for winning six games in a very tough league and putting themselves in position in the playoffs, with a good seed and a home match-up.”

Hanson highlighted the accomplishments of seniors Lorenz, Holmes, and Wilhelm. As a group, they won 37 varsity games in their four years as high school athletes, more varsity wins than any other four-year span in Gilpin boys’ basketball history. That included a playoff win from last season, which was the only one Hanson knew of in Gilpin’s records.

Hanson praised his three seniors for their commitment to Gilpin’s basketball program and for their performance.

Holmes was lauded as providing solid defense and playing smart team basketball on the offensive end.

Wilhelm scored in double digits in nine different games this season. The coach credited Wilhelm’s 17 points and 16 rebounds as being a big reason why the Eagles won the Longmont Christian game 50-33. In his career, Wilhelm scored 465 points, grabbed 259 rebounds, and made 48 three-point field goals.

Lorenz scored in double digits in every game this year, averaging 17 points per game and topping the team in rebounds. In his career, he scored 710 points, pulled in 321 rebounds, made 99 three-pointers, had 146 assists, 129 steals, and had a 75 percent accuracy rate on free throws.

“Will is a good athlete, a good teammate, a competitor, a difference maker, and a leader,” Hanson said. “Will is certainly one of the best players ever to play for Gilpin and deserves the recognition he received for being voted First Team All-League.”

END_OF_DOCUMENT_TOKEN_TO_BE_REPLACED

Benefitting the county, schools, and much more By Don Ireland   This year marks the 30th anniversary of casinos opening in the former little mining towns of Black Hawk, Central City and Cripple Creek, Colorado. In those early years, smoking was allowed inside ... END_OF_DOCUMENT_TOKEN_TO_BE_REPLACED