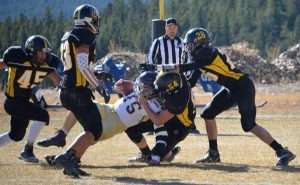 The Gilpin High School football squad had been hoping for a victory against top-ranked West Grand of Kremmling in the season’s final matchup last Saturday, October 29. A win would have made the Eagles A-8 Northwest League champions and sent them to the playoffs.

Instead, the Eagles suffered a blowout last weekend as the Mustangs defeated them 46-0, and Gilpin finished the season in a three-way tie for second place with Plateau Valley and Soroco.

This was the third straight winning season for the Eagles and the closest they have gotten to the playoffs. They beat Plateau Valley in their first league game and also brought Soroco to an overtime. Both of those teams made the playoffs.

The Eagles completed the regular season with a 3-2 league record and 5-4 in overall play.

Head Coach Craig Ball noted, “We are close to moving to the next level, and we are hoping to start working to get stronger and faster for next year right away.”

“I have coached these seniors since they were in seventh grade, and it has been really hard for me to say goodbye to this group. They had a great run for Gilpin Football, and I wish them all luck in the future,” Ball stated.

Many will recall just a year ago, when JD Guess, West Grand’s star quarterback, died in a vehicle accident. The Gilpin team traveled at considerable sacrifice to support West Grand at its game with Vail Christian on October 30, 2015. The West Grand community was very touched by the gesture and continues to speak warmly of the Eagles players and their coaches.

Gilpin’s Lady Eagles varsity volleyball team was disappointed with a 3-2 loss in its away playoff match against the Highland Huskies (Ault) on October 25. That finished their season in the Class 2A District 7 category. Undefeated Dayspring Christian finished first in the league. Gilpin was fifth of the six teams in the league, and Highland came in fourth.

Gilpin did put in an exciting showing and can be proud of the way they played. Either team could have won this playoff contest, but the Huskies held out longer.

The Lady Eagles came out strong in the first set, winning 25/20. Highland battled back to claim the second set 25/17. The Gilpin girls showed their determination in the third set, owning it with a decisive 25/14 win. The fourth set was quite a struggle, with the Huskies forging ahead to finish 25/20. Highland clinched the victory in the fifth and final set with a 15/10 win.

Alex Martin led the Lady Eagles with 14 kills, followed by Jessica Wilhelm with 8; the team had a total of 31, compared with Highland’s 49. Gilpin hit 9 serving aces, led by Cicely Lepro with 3. Highland had 6 aces. The Huskies also mustered 9 solo blocks, while Gilpin was lacking in this category. Lepro got in 27 digs, while Aspen Nadeau contributed 18 to add to the team’s total of 97. This was neck and neck with the Huskies, who managed 9. Lepro was tops in ball handling assists with 19 of Gilpin’s 23; Highland’s total was 49. Finally, Martin and Nadeau received 27 and 26 serves, respectively; Gilpin’s total was 80. Highland was close with 76.

The high school football and volleyball athletes will celebrate their accomplishments at a fall sports banquet and awards ceremony on Wednesday, November 16, at 6:00 p.m. at the school.

END_OF_DOCUMENT_TOKEN_TO_BE_REPLACED

Benefitting the county, schools, and much more By Don Ireland   This year marks the 30th anniversary of casinos opening in the former little mining towns of Black Hawk, Central City and Cripple Creek, Colorado. In those early years, smoking was allowed inside ... END_OF_DOCUMENT_TOKEN_TO_BE_REPLACED

Where the dead get to tell their story By Jaclyn Schrock On Saturday, August 21, the Gilpin Historical Society held their annual Cemetery Crawl. Tickets allowed the shuttle of hundreds of guests from the Teller House parking lot to the Cemetery. Depending on v... END_OF_DOCUMENT_TOKEN_TO_BE_REPLACED