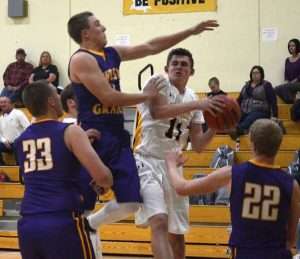 Eagles boys give the Mustangs a run for their money

The Gilpin girls’ varsity basketball team was not expected to win against the West Grand Mustangs (Kremmling) in home non-league play last Thursday, December 7. But win they did, 42-36, fulfilling one of the team goals of getting at least one upset this season. Head Coach Jeff Schuessler said the victory was especially satisfying for the seniors, who had not won a game against these rivals in the last three years. This brings the Lady Eagles’ early season record to 1-2 overall. West Grand stands at 1-4.

The Mustangs led during the entire first quarter but finished the period only 3 points in the lead, 11-8. Gilpin pulled ahead in the second quarter on a 2-point field goal by #12 Cicely Lepro. Teammate #13 Katelyn Armstrong put another 2 points up to bring the score to 14-13 Gilpin. A quick free throw by West Grand’s #11 Hailey McNichols tied the score at 14-14. West Grand edged ahead with another 2-pointer, but a 3-point field goal by the Lady Eagles ended the half at 17-16.

Gilpin’s lead widened in the third period with a quick 3-point field goal, followed by a series of 2-pointers by #30 Jessica Wilhelm and #1 Aspen Nadeau. The score was brought to 28-18 Gilpin, but a turnover to West Grand with 2:00 remaining in the quarter resulted in a field goal for the Mustangs. West Grand’s #3 Ralin Corrales stepped to the free throw line after a Gilpin foul, to make good on another 2 points. Gilpin’s #33 Nicole Adams put up another 2 points, and West Grand’s #1 Emma DeSanti swished in another free throw to end the third period at 30-23 Gilpin.

The strain showed in the fourth quarter, as both teams committed several turnovers and personal fouls and gained points at the free throw line. West Grand actually pulled ahead by 1 point with just 3:20 left in the game. Wilhelm and #2 Samantha Smith were the heroines for Gilpin, racking up another 6 points to bring the Eagles’ lead to 39-34. A free throw by Gilpin’s #11 Lena Warren brought the matter to 40-34, but the Mustangs edged closer with another 2-pointer. A free throw by Lepro widened the margin. Armstrong was flying down the court to the goal when she was shoved out of bounds by a West Grand defender with only 4 seconds left; Armstrong’s successful free throw ended the battle at 42-36.

The Gilpin boys’ varsity performed well against West Grand but lost 46-43. Head Coach Paul Hanson reported that a couple of his main players were out. The Mustangs were first to put points on the board, but Gilpin stayed close, ending the first quarter at 8-7 West Grand. Gilpin’s #20 Will Lorenz helped the Eagles catch up with his 3-point field goal near the end of the period.

The Mustangs answered at the top of the second quarter with 3 field goals and 3 points scored on free throws. Lorenz swished in another basket for the Eagles, bringing the score to 19-9 West Grand. #25 Tanner Davis made good on free throws, and #2 John Immordino and Lorenz closed the gap a bit with 2-pointers. The score was 21-16 going into halftime.

Gilpin came back ready to battle in the third quarter. #11 Alex Wilhelm contributed several field goals and performed well at the free throw line, which helped the Eagles nudge ahead to a 31-28 lead. Field goals by both teams brought the score to an exciting tally of 33-30 Gilpin.

West Grand could see a victory about to be snatched by the jaws of defeat. They pushed to tie the game at 35-35 midway through the final quarter. A 3-pointer by the Mustangs once again turned the tide in their favor, and with that momentum, they pulled ahead 42-35. Gilpin answered with a 2-pointer and a good free throw by Davis. With 8 seconds left in the game, the score stood at 44-43 West Grand. Anything was possible at that point, but it was West Grand who clinched it with 3 more points to give them the 46-43 victory.

The boys’ junior varsity squad defeated their West Grand opponents 36-31. There was no girls JV match.

The Gilpin teams suffered a drubbing by the Clear Creek Golddiggers of Evergreen on Saturday, December 9 in away non-conference play. The Eagle boys were defeated 73-59, and the girls lost 48-18 in those skirmishes.

The Gilpin teams visit Rocky Mountain Lutheran on Thursday, December 14, and host Lake County on Saturday, December 16, beginning with boys’ and girls’ junior varsity games at 1:00 p.m. Girls’ varsity game is at 2:30, and the boys’ varsity starts at 4:00 p.m.

END_OF_DOCUMENT_TOKEN_TO_BE_REPLACED

Benefitting the county, schools, and much more By Don Ireland   This year marks the 30th anniversary of casinos opening in the former little mining towns of Black Hawk, Central City and Cripple Creek, Colorado. In those early years, smoking was allowed inside ... END_OF_DOCUMENT_TOKEN_TO_BE_REPLACED

Where the dead get to tell their story By Jaclyn Schrock On Saturday, August 21, the Gilpin Historical Society held their annual Cemetery Crawl. Tickets allowed the shuttle of hundreds of guests from the Teller House parking lot to the Cemetery. Depending on v... END_OF_DOCUMENT_TOKEN_TO_BE_REPLACED