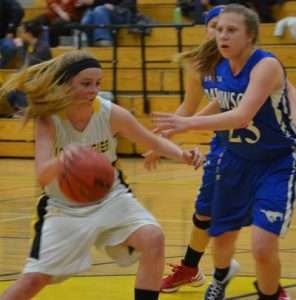 “Sophomore Julia Blohm guarded their [AD’s] best player during the second half to help shut them down,” Schuessler commented. “We were able to cut down on their aggressiveness and go man-to-man to create good shots.”

Gilpin took an early lead, but gave it up midway through the first quarter and had to battle to keep the score at a 12-12 tie. The second period saw the Eagles and the Mustangs keeping each other off the board. With only about two minutes left in the period, AD scored a basket, and it was 14-12 at the halftime break in favor of AD.

But Gilpin wasn’t about to let the game go. After the break, the girls came back ready to win. They turned up the heat to push ahead with 15 points in the third quarter and another 8 in the last period, holding AD to only 9 points in the entire second half.

The Lady Eagles chalked up another win on January 24 in an away conference test. This time they faced Jim Elliot Christian (JEC) of Englewood, coming away with a 32-28 win.

As in the AD game, the score was tied at the end of the first period, 8-8. Gilpin then pulled ahead in the second quarter with 9 points to JEC’s 2. JEC made more of an effort in the second half as they outscored the Eagles by three points, but it wasn’t quite enough to overcome Gilpin.

Statistics for the games were unavailable at press time.

END_OF_DOCUMENT_TOKEN_TO_BE_REPLACED

Where the dead get to tell their story By Jaclyn Schrock On Saturday, August 21, the Gilpin Historical Society held their annual Cemetery Crawl. Tickets allowed the shuttle of hundreds of guests from the Teller House parking lot to the Cemetery. Depending on v... END_OF_DOCUMENT_TOKEN_TO_BE_REPLACED

Benefitting the county, schools, and much more By Don Ireland   This year marks the 30th anniversary of casinos opening in the former little mining towns of Black Hawk, Central City and Cripple Creek, Colorado. In those early years, smoking was allowed inside ... END_OF_DOCUMENT_TOKEN_TO_BE_REPLACED