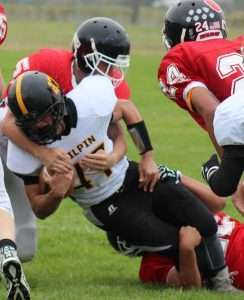 The Gilpin High School football team smashed the Belleview (Westminster) Bruins 54-0 on September 23 on Belleview’s turf. The Eagles now sport a 3-1 overall record; the matchup was a disappointing loss for the Bruins in their first season game.

Gilpin’s homecoming game is Friday night, September 29, at 7:00 p.m., when they will meet Plateau Valley of Collbran.

The Eagles struck hard and fast in the first quarter, gaining 18 points. They followed with 16 points in the second quarter to bring the score to 34-0 at the half. During the second half of the game, Gilpin put up 14 points in the third quarter and 6 in the fourth, finishing the contest with a 54-0 victory. The team used the opportunity to practice their passing game, with good results on a completed pass to Stephen King for 47 yards.

Players of the Game for Gilpin were Austin Boulter (overall), who gained 110 yards rushing, scored 3 touchdowns and 2 conversions, blocked one punt and got a safety; Jack Ball (offensive), who rushed for 157 yards, ran into the end zone for 2 TD’s and a conversion, and had 9 carries for an average of over 17 yards per carry; and Stephen King (defensive), who had 2 total tackles and 2 interceptions returned for 79 yards total. The first return was 24 yards for a pick six; the second return was 55 yards for a pick six, but it was called back for an unneeded block.

Those scoring touchdowns for the Eagles were Boulter (3), Jack Ball (2), Angel Gomez (1), and King (1). Boulter had 2 successful conversions, while Ball, M. Gomez, and Trujillo each had 1.

Manny Gomez was another leader for the Eagles, with 7 carries for 38 yards. Josh Trujillo had 5 carries for 44 yards, including 25 long. John Immordino recovered a fumble.

Boulter, M. Gomez, and Deven Moore put pressure on the Bruins’ quarterback with 4 sacks for a total loss of 16 yards, and Moore, M. Gomez, Trujillo, and Immordino hurried the Belleview QB on 4 occasions.

Gilpin rushed for 365 yards, received for 47, had 9 kickoff return yards, and 79 yards in interception returns, for a total of 500 yards.

Taking it to the Net

Gilpin’s varsity volleyball team enjoyed two wins last week, flying past their rival, the Nederland Panthers 3-0 in conference play on Tuesday, September 19 at home and upsetting the previously undefeated Belleview Christian Bruins 3-0 on Saturday, September 23 in an away non-conference match. The Eagles came out on the losing end 0-3 when they traveled to Lyons on September 21. Gilpin’s record is 6-4 overall, 3-2 for league.

The Lady Eagles meet Twin Peaks Charter in the Gilpin gym during Thursday, September 28, during homecoming week; junior varsity begins at 5:00 p.m. and varsity at 6:00 p.m.

Gilpin scored first in all three sets and pretty much kept their lead throughout, although Ned worked hard and maintained their spirit, doing a little better each set. The Panthers even tied the score briefly during the final set.

Alex Martin led Gilpin with 9 kills, followed by Kasen Nelson and Nicole Adams with 5 each. The Lady Eagles hampered the Panthers with multiple serving aces; Courtney Holmes led with 9, followed by Kasen Nelson with 8, and several other players contributed. Aspen Nadeau was digs leader with 6. Cicely Lepro got in 22 assists. Nelson was first in serves received with 7.

In the game with Belleview, the first set was the tightest battle, Gilpin coming out on top 25/20. The second set was 25/16, and the third set 25/14. Martin and Nelson were first in kills for the Lady Eagles, with 12 and 10 respectively. The team’s total was 26. Bailey Hobson-Kroll garnered 3 of Gilpin’s 7 serving aces. Martin, Katelyn Armstrong, and Adams each had 1 solo block. Nadeau was digs leader with 12 out of 30. Lepro came in with 19 assists, and Nadeau was first in serves received with 22 of the team’s total of 37. Belleview’s overall record is 9-1, 2-0 in league play.

END_OF_DOCUMENT_TOKEN_TO_BE_REPLACED

Where the dead get to tell their story By Jaclyn Schrock On Saturday, August 21, the Gilpin Historical Society held their annual Cemetery Crawl. Tickets allowed the shuttle of hundreds of guests from the Teller House parking lot to the Cemetery. Depending on v... END_OF_DOCUMENT_TOKEN_TO_BE_REPLACED

Benefitting the county, schools, and much more By Don Ireland   This year marks the 30th anniversary of casinos opening in the former little mining towns of Black Hawk, Central City and Cripple Creek, Colorado. In those early years, smoking was allowed inside ... END_OF_DOCUMENT_TOKEN_TO_BE_REPLACED