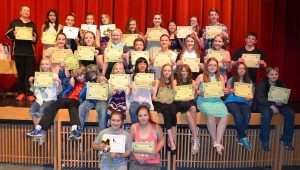 Hard work and talent on display

Gilpin County Middle School and High School students were honored on May 10 for 2015-16 participation in the arts. Secondary Principal Alexis Donaldson noted that this was the first time in 15 years that the fine arts program had had an awards program, giving the Booster Club credit for instituting it once again. She also acknowledged the custodial staff, transportation, parents, and especially students.

“The music and arts performances last week were incredible,” she said. “I was blown away by all the hard work and talent shown.” She also praised the drama production of “The Lion, the Witch, and the Wardrobe” as a joy to watch and an incredible performance.

Not all students were present at the program.

Hannah Raynes directed the spring production of “The Lion, the Witch, and the Wardrobe.” She and husband Ryan Raynes presented pins for cast and tech crew.

END_OF_DOCUMENT_TOKEN_TO_BE_REPLACED

Benefitting the county, schools, and much more By Don Ireland   This year marks the 30th anniversary of casinos opening in the former little mining towns of Black Hawk, Central City and Cripple Creek, Colorado. In those early years, smoking was allowed inside ... END_OF_DOCUMENT_TOKEN_TO_BE_REPLACED