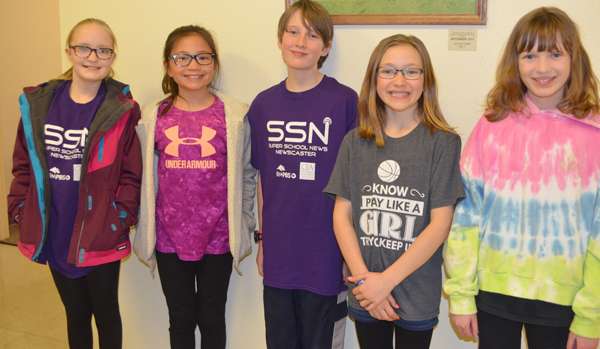 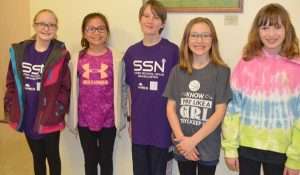 Artists of the month for February and March presented their artwork. Art teacher Curt Halsted explained his students’ work.

Ten-year-old Jadie DiMauro had done a lovely watercolor of a rainbow trout. Her artwork was part of a collaboration with her science class, which was engaged in a trout project. Her art expressed what she was learning in science.

Kailee Starkey, age 13, had been working on a unit on artistic depth and complexity. Halsted reported that the students began with simple works and progressed to more complex pieces. They researched paleo scientists and became paleo artists. Starkey’s artwork showed a fuzzy, winsome dinosaur on a colorful background.

Elementary technology teacher Patrick Linnehan accompanied his fifth graders for a presentation on PBS’s Super School News. Linnehan said PBS was ending the program after 50 years due to lack of funding. The Gilpin fifth graders had the privilege of being part of the final show.

The students gave their impressions of the newscast production.

“It was a great opportunity for the whole fifth grade.” “It was a very professional environment at PBS.” “It was hard looking at the different cameras.” “We learned how they put the shows together and got to see what else was airing on PBS.” “We’re sad that it’s ending.”

The children elected to report on Gilpin’s new football field and the fifth grade band program.

Linnehan said it was an eye opener for the students to see what goes into producing a two-minute newscast.

Middle school girls’ basketball players finished their season with a 24-1 record. The A team was undefeated in the 5280 League, and the B team won first place in the Frontier League.

Gilpin students attended the Stock Market Challenge in Denver and came in 13th out of 42 teams.

$15,000 was raised for scholarships at the Gilpin County Education Foundation dinner last Saturday.

The school received the John Irwin Excellence Award and the CDE Accredited with Distinction award for the second year in a row. Holmes displayed banners announcing these awards.

The Board approved the Business Manager’s Report, check vouchers for February-March, and the financial statement for March.

MacKenzie said that a lot of research has been done in the past few years that shows the most important resource that a student can have is his teacher. The second most important resource is a principal as an instructional leader. He felt fortunate to have Donaldson and Huntoon as principals, saying they possessed the characteristics of instructional leaders.

“The proof is in our recent awards,” he said.

The Board approved the delayed start on March 7 and the school closure on March 14-15 due to weather and travel conditions. Swanson asked whether the cancellations would necessitate any changes to the school calendar. MacKenzie advised that four days and six hours are built into the calendar for such closures. Two days and two hours have been used so far. Armstrong added that a calendar change would be necessary if the district goes over the four day, six hour limit.

Donaldson reported that teachers took part in an in-service day last Friday to review the school culture student and parent surveys. They reviewed the 7 Mindsets, a social-emotional learning program that will be implemented in grades 6-9 next school year.

The Foreign Travel group will be going to Ireland over spring break.

Snowdodgers are gearing up for their last two trips of the season. Two of their Friday ski trips were canceled because of weather and a power outage. The resorts are extending their seasons, and the group hopes to take ski strips on April 12 and 19.

Huntoon said the students had earned 20 “Eagles” for doing well in positive behavior. On Thursday, March 21, each class will have 30 minutes to enjoy a bouncy house, giant slide, obstacle course, Velcro wall, and popsicles.

Huntoon reported on the STAR testing benchmark #3, which shows progress from the beginning of the school year until now. Most students in kindergarten through fifth grade were at or above grade level in reading and math. She believed that the students would do well in upcoming state testing but was a bit concerned about the fifth graders in math. A few new students had enrolled in Gilpin this year; she said they came in “a little low.” Additionally, there is new staff in fifth grade.

Holmes felt the growth numbers were encouraging, as this has been a weak area for Gilpin in the past.

“We are trying to get as many kids at the 75th percentile as possible. There are three to five kids we need to push farther,” Huntoon advised. “Intervention has increased from 20 minutes two times a week to four times a week.”

She said teachers are helping kids with test-taking strategies and academic vocabulary.

MacKenzie reported on the wastewater treatment plant project, advising that the clarifier will be drained on Monday.

Jim Noble, Inc. has the bid for the atrium stairs project. John Noble of that company is coming for a pre-construction meeting on Thursday. Noble plans to drill the footing holes and pour concrete next week.

The school received a security disbursement grant from the Division of Homeland Security for $176,180 for security upgrades. Bids are being taken from fire project engineers to make sure that all upgrades comply with fire code. MacKenzie is attempting to get three bids for the consulting work.

The superintendent will attend a state-wide school mill levy meeting on April 5 in Mapleton.

He is working on the District’s report to the public, which he hopes to have inserted in area newspapers in April. The report will also be sent to all parents in a dedicated email, and copies will be available for visitors to the school.

The telephone system upgrade is on track to be done over spring break.

The Board concluded the public portion of its meeting at 8:00 p.m. and went into executive session regarding negotiations.

Parent-teacher conferences are April 4 and 5. 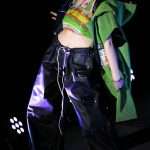