School Board celebrates Board Recognition Month

The Gilpin County Board of Education met on Wednesday, February 22, at 7:00 p.m. The meeting was changed from the regular Tuesday night schedule due to 2A District tournament games that were held Tuesday. All Board members were present, along with Superintendent David MacKenzie, Secondary Principal Alexis Donaldson, Elementary Principal Heather Huntoon, and Secretary to the Board Gretchen Sechler.

The Board honored three artists. Third grader Brooklyn Deleon was the December artist. Her piece, a snowman decked with Christmas lights, was displayed at the winter arts program at the school and again at the Gilpin Community Center’s Winter Arts Festival.

Artist for January was ninth grader Joyce Jewell, who created an abstract of a wolf. Art teacher Curt Halsted said, “It has amazing balance and principal of design.”

Fourth grader Robert Ray’s watercolor of a lantern earned him the February artist of the month honors. Halsted explained that the students sprinkled salt in with the paint for a snowy effect.

Halsted also reported that the school received a $1,000 grant from the Gilpin County Arts Association. “We are using it to expand our technology with a green screen system. It’s been used in eight classes in the elementary and high school.”

The system involves filming a video in front of a large green sheet that goes on the wall. Editing software removes the green color, and other colors get inserted as desired. High school parents donated lights, and an iPad for editing and a carpet matching the green wall were purchased. Other tools include a computer voice recognition system that allows students to comment on their art and a program to post photos of their art.

January was School Board Recognition Month in Colorado; however, Gilpin’s Board did not have time to include this celebration in its single January meeting. At the February 22 meeting, therefore, Board members Craig Holmes, Brook Ramsey, Charlotte Taylor, Kersten Armstrong, and Steve Boulter were honored for their service with cards, a cake, and gift certificates to the Bistro Restaurant at the Reserve Casino.

Fifth-grade teacher Sharon Lutes and her class gave a presentation on their “Mindset for Success” course, including “The Power of Yet.” The students were Joey Morgan, Dakota Cowles, Jordan Hobson-Kroll, Sara Bellinsky, Lincoln Vincent, and Teddi Vaughan-Tomlinson.

Lutes explained that teachers had learned about two different mindsets – “growth” and “fixed” – during a study of the book Mindset, the New Psychology of Success, by Carol S. Dweck. The book instructs people on how to make their lives more successful; the techniques are used in sports, education, corporations, and elsewhere.

“It’s a different way of thinking,” Lutes noted. “Most of us teach this way now.”

Her class has been engaging in an entire course on this philosophy. “They don’t know yet what “yet” means,” she said. “Tomorrow is “yet” day in class.”

The presentation included a quiz, during which students asked questions of the assembled Board members, parents, and other students in order to reveal whether the participants had a growth or fixed mindset. Examples were, “I like to do work that I learn from, even if it means I make a lot of mistakes,” and “Very smart people do not need to try very hard.” There were no right or wrong answers. Most of the audience seemed to have a growth mindset.

Next, students presented scientific research on how brain cells grow through challenges.

“Famous Failures” was the third portion of the program. Lutes noted that all people who were famous successes also had failures, including Vincent Van Gogh, Babe Ruth, and Colonel Sanders. The students researched and produced a motivational video on those and other famous figures, learning that perseverance was a key to success.

The principal of perseverance was demonstrated in a video about Nick Vujicic, a man who was born with no arms or legs. Vujicic expresses a thankful attitude and focuses not on what he does not have, but on what he does have. He has learned to ride a skateboard, surf, play soccer, and succeed at many other skills. He travels the world encouraging youth and adults never to give up.

The students created and performed a skit showing the difference between fixed and growth mindsets. “The brain is like a muscle and can be exercised by studying. You can change by persevering,” they emphasized.

Through perseverance, learning from failures, and being willing to keep trying, the class discovered the answer to the question, “What is the Power of Yet?” It is simply this: Students learn that success in life is in their own hands. They are in control of their own futures. Those with a growth mindset say, “We just don’t know it … yet.”

After the Board’s meeting on January 17, the calendar had been circulated among parents and the public for comment. Concerns addressed by the Board included finals on December 15 and an increased cost of the students’ trip to Italy due to moving spring break. It was also considered important to have Gilpin’s spring break coincide with that of Jefferson County for the sake of students attending Warren Tech.

Donaldson reported that the basketball teams wrapped up their seasons with the 2017 2A District 7 tournaments. The boys lost their first round game to Union Colony Prep by only two points, 48-46. The girls were defeated 42-22 by Highland.

Josh Trujillo participated in the state wrestling tournament last week; Donaldson said he was the first Gilpin wrestler at the tournament since 2004 (Gilpin students were on Clear Creek teams in recent years and now have their own team).

Damien Sonsino will represent Gilpin at the state spelling bee in March.

MacKenzie reviewed STAR testing data with the principals and recommended some interventions and several adjustments.

Secondary students will be working on an energy audit project through the Brendle Group for the Colorado Energy Office. Secondary science teacher Heather Newman has volunteered to work with a small group of her students and the Interact Club (student service club) to gather data and present what they learned to the Board.

MacKenzie presented the schedule for the various phases of the Request for Proposal on the sports stadium, water line relocation, and driveway excavation project. Proposals are due on March 9, and open bids will be presented in a public meeting on March 13 at noon at the school. He anticipated that the contractor would be selected on March 30, the contract awarded on April 4, and the project completed by July 31.

The District is advertising sealed bids in the Weekly Register-Call for its 2000 Bluebird Bus ($500 minimum bid) and its 2005 Chevrolet Suburban ($3,500 minimum bid), due March 1. Public bid opening is March 2 at noon in the District office.

The Board adjourned its public portion of the meeting and went into executive session regarding matters subject to negotiation and employment contracts. 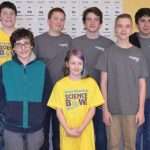