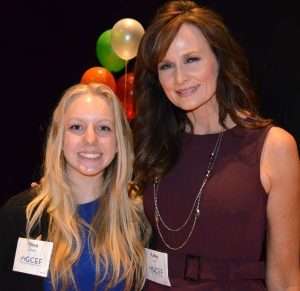 “All it takes is one person to believe in you,” says speaker Kathy Sabine

“We raised $12,000, exceeding our goal by $2,000 and breaking all records with 87 in attendance,” reported Sarah Swanson, GCEF Board Vice President. After expenses, $9,000 will be added to the scholarship fund. The scholarship subcommittee of the Board of Directors will review all applications and decide how many scholarships and the amount of each to award.

In the past, GCEF has raised money for grants for teachers, field trips, Montessori programs, and technology, including a 3-D printer for the high school, among other projects.

GCEF President Craig Holmes advised that the Foundation plans to start a private, non-profit store in Black Hawk in conjunction with the City of Black Hawk and Gilpin County School RE-1. The store will be next to the post office and will offer vocational opportunities for students who choose not to attend college.

“Black Hawk is giving us the space at cost, and the lease is almost signed,” Holmes noted. “Students will learn marketing, logistics, inventory control, payroll, and so forth.” School district employees will staff the store. Holmes invited attendees to help come up with a name for the new venture.

Holmes is also the president of the Gilpin County Board of Education. As such, he said, “We’re in a unique situation – we have a budget surplus. We paid off our bond early, so we have residual funds and can now do some capital projects.” The school district is having a design cost analysis done for a number of proposed projects, including paving the parking lot, adding additional concessions at the football field, and constructing public restrooms connected to the building.

As part of the passage of the 3A mill levy override in 2013 that enabled the surplus, the district pledged to improve technology in the school; accordingly, Chromebook computers have since been purchased for every student. Other goals that have been fulfilled include raises for teachers and academic improvement for students – ACT scores have been higher than the state average for the past two years in a row.

College student Nina Halsted received a GCEF scholarship as a 2015 graduate of Gilpin High School and spoke at the dinner. She is now studying ecosystem science and sustainability at Colorado State University in Fort Collins. Nina commented, “I appreciate the ideals I gained from my teachers at Gilpin. My scholarship from the Education Foundation helped make college possible.”

Swanson challenged each person to make an extra contribution beyond what they had paid for the dinner. She pointed out cards that were on each table that the guests could hold high, indicating their commitment to bringing the GCEF closer to its goal.

Kathy Sabine, the keynote speaker, told of being a financially strapped student grateful for grants and scholarships. Sabine related herself to Nina Halsted.

“I was Nina,” she recounted. “I was a shy, small-town girl from Truckee in Northern California. There were 99 in my graduating class.” Her father was the head of a ski school, and her family’s cabin home backed up against BLM land. Her best friends were animals.

Influenced by her science teachers, Sabine’s dream was to become a veterinarian. “All it takes is one person to believe in you, and the world becomes your oyster,” she asserted. “My family couldn’t afford college, but I had a great mentor who showed me how to get grants and scholarships.” She is adamant that she could not have afforded higher education without that financial assistance.

Sabine became the first in her family to go to college, attending Cal Poly State University and working two jobs while she studied. Eventually it became obvious that it was not possible to keep that up for the nine years required to become a vet, and Sabine switched fields to journalism, in which she received a degree.

She detailed her early struggles in television, working as a teleprompter, having a closet for a weather office, doing reporting, anchoring, and producing. Finally, an agent spotted her and got her a job on The Weather Channel. In 1993, Sabine landed in Denver on 9News.

“I had never lived here before and learned that people depend on the weather forecast to make their plans.”

Sabine learned well – she was given a Regional Emmy award four times for Best Weather Anchor. She returned to school and received a second degree, in meteorology.

After an amusing description of one of her typical full days, Sabine wrapped up with a question-and-answer session and a quick live auction, offering a tour of the 9News station for a group of ten. The bidding began at $100 and progressed to $600. A second tour went for $500.

A raffle was also held, with dozens of prizes handed out to rowdy applause. Gilpin Arts 2016 calendars, novelettes by local author Maggie Magoffin, Central City Opera tickets, handmade coasters by Kevin Armstrong, a number of pieces crafted by Wabi Pottery, gift certificates for food and lodging at the Reserve Casino and Dostal Alley were a several of the many prizes.

The GCEF was founded in 1994 with a mission to support the teachers, coaches, and parent association of the Gilpin County School District in order to further the education experience of all students. In 2010, the GCEF began the scholarship dinner to raise funds to support graduating seniors who demonstrate academic excellence. Any student who is a full-time Gilpin resident may be considered, regardless of the school they attend.