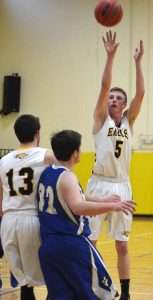 The Gilpin men’s basketball team capped their league season by winning three in a row over 5280 League opponents and a non-league game against North Park. The wins left Gilpin with a 13-5 season record and a 6-2 record in the league. The four wins included the victories over Community Christian and North Park that were reported last week.

A spirited Denver Waldorf refused to quit and gave the Eagles quite a battle on Monday, February 16, at the Gilpin gym. The Eagles forged a 43-34 halftime lead behind the shooting of Matt Immordino and Chase Boulter, both of whom hit 30 points for the evening. Rallying behind Cal Archer and Cameron Morse, the smaller Spartans chopped 3 points off the lead by the end of the third period. Archer fouled out in the fourth period and the Eagles found the ball easier to move because he wasn’t stealing their dribbles. The Eagles’ defense saved the day as they actually made one more steal than the Spartans. The offense committed one fewer turnovers and outshot the Spartans 48% to 47%. The 75 points recorded by the Eagles was their highest score all season.

It was Senior Night on Tuesday, February 17, and the home standing Eagles started all three seniors. A spirited victory followed as the Eagles pressed and stole the ball repeatedly to forge a 51-23 lead at halftime. Little-used Jon Gonzales inspired the defense as he hustled after the ball around on the perimeter and caused the Bulldogs to make easily stolen passes. Possibly the biggest cheer went up when Gonzales scored a layup for his only two points of the evening. The other two seniors, Chase Boulter and Jonathan Ramsey shook the nets for 34 and 13 points to lead the scoring. Matt Immordino also contributed with 12 points. Although Cornerstone was the league’s poorest team, the Eagles still put on an impressive performance as they clinched third place in the league.

END_OF_DOCUMENT_TOKEN_TO_BE_REPLACED

Benefitting the county, schools, and much more By Don Ireland   This year marks the 30th anniversary of casinos opening in the former little mining towns of Black Hawk, Central City and Cripple Creek, Colorado. In those early years, smoking was allowed inside ... END_OF_DOCUMENT_TOKEN_TO_BE_REPLACED