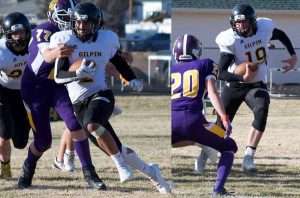 The Gilpin County High School Eagles came away from last Saturday’s football contest versus the Elbert High School Bulldogs with a decisive victory. The Eagle’s final game of the season was played last Saturday afternoon on the Bulldog’s home field in Elbert Colorado.

The Eagle’s head coach Craig Ball summed up the game and the season as follows: “The last game of the year is always an emotional game and we felt lucky to get all seven games in during the 2020 season. The plus-one postseason game was scheduled with Elbert HS to be played in Elbert on Saturday, November 21st at 1 pm. Our Gilpin football team was excited to play this game against a new team from another league (the Central League). Elbert was 4-1 coming into our post-season game with them, and with ten seniors had won their league in the 2020 season. Our team had prepared for a big and experienced team and we were ready for them. With our new flow defense, we have a balance of aggressiveness mixed with backside containment. The Bulldogs scored on their first possession, but our defense figured them out quickly and began to hit hard. We held them out of the end zone for the rest of the game. Our offense was powerful throughout the game. The Bulldogs were able to use the excitement of this final game and their size to stop our opening drive, but that was the last time they were successful in stopping us as we scored 52 unanswered points with a mostly punishing running game. It is quite an accomplishment to go to the Central League Champs home field and dominate as we did; it really shows how strong our team had become over the season. Congratulations to our seniors and the team for posting Gilpin’s first winning season since 2017. It was a heck of a ride and I enjoyed every minute of it.”

The first few minutes of the game developed poorly for the Eagles upon receiving the kickoff from the Bulldogs. The Eagles initial possession lasted only four plays with a turnover on downs on the Bulldogs 32-yard line. The Bulldogs took immediate advantage by putting together a 9-play, 68-yard drive, including three 1st downs, for the initial touchdown of the game. After an unsuccessful 2-point conversion attempt the score was 6-0 Bulldogs with 7:03 on the clock. The Bulldogs kickoff went into the Eagles end zone for a touchback turning the ball back over to the Eagles on their own 20-yard line. After a mild showing on their early possession the Eagles came back tough with a 15-play, 80-yard drive culminating in a touchdown run from the Bulldog’s 1-yard line by Blake Boulter (19). Following a failed 2-point conversion the score was tied at 6-6 with 3:13 remaining on the 1st quarter clock. A determined Eagles defense returned with purpose and held the Bulldogs scoreless for the rest of the game. After downing the Eagle’s short kickoff on their own 44-yard line, the Bulldogs controlled the ball for only four downs before being forced to punt on a 4th and 8 from their own 49-yard line. On the punt return the Eagles were penalized with a blind side block setting the ball back to the Eagles 9-yard line to start their possession. The Eagles proceeded to move the ball to the Bulldogs 39-yard line in 6 plays to windup the 1st quarter.

To begin the 2nd quarter the Eagles continued the drive that they started in the 1st quarter for another five plays including two first and 10’s and finishing with a King (2) rushing touchdown from the Bulldog’s 7-yard line. A completed pass to Kamron Brewer (8) clenched the 2-point conversion pegging the score at 14-6 Eagles. A long kickoff by the Eagle’s Nolan Lindberg (8) resulted in a touchback giving the Bulldogs possession on their 20-yard line. The Bulldogs held the ball for only four downs turning possession back to the Eagles with an incomplete pass on a 4th and 3 from their 27-yard line. The Eagles fashioned a 27-yard, 7-play effort that ended with a 2-yard rushing touchdown by Boulter (19). King (2) followed up with a 2-point conversion run fixing the score at 22-6 Eagles with 7:18 left on the half-time clock. Fielding a Lindberg (6) on-sides kick the Bulldogs downed the ball on their 38-yard line. Again the Bulldogs were forced to turn the ball back over to the Eagles on the 4th down of their possession from their 39-yard line. King (2) returned the punt to the 50-yard line to begin another Eagle’s drive culminating with a King (2) touchdown followed by a King (2) 2-point conversion. With a new tally of 30-6 Eagles and with 2:02 remaining on the clock the subsequent Lindberg (6) kickoff went out of bounds returning control of the ball to the Bulldogs on their 17-yard line. The Bulldogs took four plays to move the ball to their 24-yard line as the half time clock elapsed.

The second half of the game began with an Eagles short kickoff that was returned by the Bulldogs to the Eagle’s 47-yard line. After their first four downs the Bulldogs were faced with a 4th and 17 on their own 46-yard line compelling them to punt. King (2) received the punt and carried the ball all of the way to the Bulldogs end zone for another Eagles touchdown. Boulter (19) followed up with a carry to the right side for the 2-point conversion bringing the score to 38-6 Eagles. The Bulldogs returned an Eagle’s bouncing kickoff to their 25-yard line. The Bulldogs then took seven plays, including one 1st and 10, to advance the ball to their own 30-yard line where they were forced to turn the ball back over to the Eagles with a punt on a 4th and 15. After a penalty against the Eagles on the punt reception, King (2) ran the ball for the next three plays the third of which was a 43-yard rushing touchdown. King (2) also completed a 2-point conversion with a run to the right side making the score 46-6 Eagles with 6:10 left on the 3rd period clock. The Bulldogs returned the Eagles following kickoff to the Eagle’s 42-yard line. The Bulldogs put together a 6-play, 10-yard drive, including a 1st and 10 and a run into the end zone that was called back on a Bulldog blocking penalty. The 3rd quarter ended with a Bulldog 4th and 12 completed pass to the flat that was stopped before reaching the 1st and 10 line, causing a turnover to the Eagles on downs.

The 4th quarter passed quickly with the Eagles in possession of the ball for 16 consecutive plays. The Eagles moved the ball 80 yards from their 20-yard line to the Bulldogs goal line where on the final play of the drive King (2) carried the ball into the Bulldog end zone for a final touchdown. After a failed 2-point conversion attempt the score was set at 52-6 in favor of the Eagles with 2:54 left on the board. The spread in the score triggered a running clock. Following the Eagle’s kickoff the Bulldogs had time for one play from the Eagles 49-yard line where they recovered the ball. The Bulldogs ran out the clock on a final incomplete deep pass play.

With their win over the Elbert Bulldogs the Eagles ended their 2020 season with a League record of 3 wins to 2 losses and an overall record 4 wins to 3 losses. To echo Coach Ball’s words, congratulations to the team and our seniors Blake Boulter (19), Stephen King (2), Nolan Lindberg (6), Rayvaughn Amaya (81) and Triston Dipasquale (47) for a winning Eagles football season.

END_OF_DOCUMENT_TOKEN_TO_BE_REPLACED

Where the dead get to tell their story By Jaclyn Schrock On Saturday, August 21, the Gilpin Historical Society held their annual Cemetery Crawl. Tickets allowed the shuttle of hundreds of guests from the Teller House parking lot to the Cemetery. Depending on v... END_OF_DOCUMENT_TOKEN_TO_BE_REPLACED