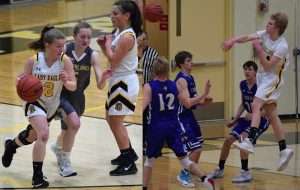 Non-League basketball against the Nederland Panthers

The girl and boy’s games were played Tuesday, February 18 on the Eagle’s home court at 5:30 pm and 7 pm respectively.

A Golddigger 3-pointer initiated scoring in the 2nd half of the game. The next score came midway through the 3rd quarter with a Lindberg 3-pointer followed by a Golddiggers free throw and a 3-point field goal putting the Eagles behind by 7 points at 20-27. With 2 minutes left in the period, the Eagle’s Lindberg (24) made a free throw followed shortly by a King (4) 2-pointer while the Golddiggers added 2 2-point field goals ending the quarter at 23-31 Golddiggers.

The Eagles outscored the Golddiggers by one point in the final quarter, insufficient to make up the 8-point deficit coming into the quarter. The Eagles made the first 2 scores in the period with a Boulter (25) 2-point field goal and a Lindberg (24) free throw. Through the last 6 minutes of the game the Golddiggers completed 3 2-pointers and a free throw while the Eagles added 2 free throws and a 3-point field goal by Lindberg (3). The game ended with an Eagle’s 7-point deficit on a score of 31-38.

The Eagles held the Golddiggers scoreless in the 2nd quarter while adding another 11 points to their own total. Two players contributed to the Eagle’s 2nd period count; Lena Warren (11) with a 3-point field goal plus 2 2-pointers, and Ramsey (12) by a pair of 2-point field goals. The first half of the game ended with a score of 26-2 Eagles.

In the final period the Golddiggers added 7 points to their tally with 2 3-point field goals and a free throw. The Eagles enhanced their count by 6 points with 1 2-point field goal each provided by Ganz (22), Smith (1), and Noemi Correa (3). The game ended on a score of 43-15 Eagles.

The Panthers were held scoreless during the 1st quarter of the game. The Eagles scored 14 points during the period with contributions from Nicole Adams (33) with a 2-point field goal and a free throw, Alicia Johnson (20) with 3-point and 2-point field goals, and Joyce Jewell (21) and Lena Warren (11) with 1 2-pointer each. The quarter ended with a score of 14-0 Eagles.

In the 3rd quarter the Eagles outscored the Panthers by only 1 point. The Panthers scored a 2-pointer half way through the quarter and another 2 as the last score of the quarter. The Eagles Sarah Trujillo (5) and Smith (2) each completed 1 2-point field goal while Adams (33) added 1 point with a free throw for a total of 5 points through the period. The period ended at a score of 30-9 Eagles.

Johnson (20) produced a 2-point field goal and Adams (33) added a free throw to score the Eagle’s only 3 points in the 4th quarter. However, the Panthers scored only 4 points themselves with 2 2-point field goals.

The Lady Eagles next game will be in the playoffs on Gilpin’s home court on February 25th at 6:00 PM against the Highland High School Huskies.

Nederland does not currently have a boys’ varsity team, however, the Panthers did have a junior varsity team to compete with Gilpin’s JV team last Thursday night. Although the Gilpin vs Nederland boy’s JV game did not count as a league game, it did provide an opportunity for a number of the Eagle’s less experienced players to acquire valuable court time.

The Panthers offense came back tough in the 4th quarter scoring 21 points to the Eagles 4. In the first 6½ minutes of the final period the Panthers scored 14 points only interrupted by one Eagle’s free throw by Brogan Thomas (20). During the last minute-and-a-half of the quarter the Eagles added just 3 more points from free throws, 1 by King (4) and 2 by Boulter (25) while the Panthers added 7 more points. The game ended with the Eagles winning by just 2 points on a score of 45-43.

Head Coach Paul Hanson had the following comments about the game: “Gilpin took a commanding lead with their one Freshman, and four Juniors starters versus Nederland’s upperclassmen starters, including two seniors. Score was 41-15 in 3rd quarter. Gilpin substituted their whole bench to demonstrate sportsmanship instead of running the score up. Everyone on Gilpin’s bench played a lot. Nederland made a run versus Gilpin’s 2nd and 3rd string players, but Gilpin held on to win 45-43. It was a well-played game with good sportsmanship.”

The Eagles boys’ varsity will play their next game in the playoffs against the Dawson School Mustangs on the Mustang’s home court located at 10455 Dawson Drive, Lafayette, CO on Tuesday, February 25th at 6:00 pm.

END_OF_DOCUMENT_TOKEN_TO_BE_REPLACED

Where the dead get to tell their story By Jaclyn Schrock On Saturday, August 21, the Gilpin Historical Society held their annual Cemetery Crawl. Tickets allowed the shuttle of hundreds of guests from the Teller House parking lot to the Cemetery. Depending on v... END_OF_DOCUMENT_TOKEN_TO_BE_REPLACED