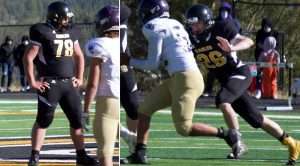 Record goes to 2 and 2 overall

The Eagles Saturday afternoon game with the West Grand Mustangs leaves the Eagles with 2 wins and 1 loss in League play and 2 wins and 2 losses overall. The Eagle’s Head Coach Craig Ball commented on the game as follows: “West Grand is well-coached and has a good group of experienced players. We needed to play error-free to have a good chance to compete and we came up short on that goal. We had three turnovers in the first half and had trouble keeping the Mustangs out of the end zone. We put together a better effort in the second half and had over 200 yards rushing and completed a few more passes. We had three drives that resulted in TDs and our defense started to play better at stopping the West Grand counter plays. We will be traveling to Hayden for our Friday night game.”

The 2nd quarter was less eventful as the Eagles, although not scoring, held the Mustangs to only one 6-point touchdown. The Eagles started the period by completing a 5-yard run on a 4th and 1 and continuing their 3-down drive, from the 1st period, for another seven plays ending with a turnover on downs on the Eagle’s own 40-yard line. The Mustangs responded with a 9-play drive for another touchdown and a failed 2-point conversion attempt making the score 0-26 Mustangs. The Mustangs followed with a flat kickoff picked up by Kamron Brewer (8) and returned 3 yards to the Eagles 34-yard line. The Eagles advanced the ball 46 yards to the Mustangs 20-yard line in 12 plays and, on a 1st and 10 play, threw an interception for another turnover to the Mustangs. After seven plays and a gain of 59 yards, the half ended on a Mustangs 2nd and 8 at the Eagle’s 33-yard line.

The final period of the game commenced with an Eagles kickoff that was returned by the Mustangs to the Eagles 49-yard line to begin a 6-play drive for a Mustang touchdown. After an incomplete pass on a 2-point conversion attempt and with 9:42 left on the game clock, the scoreboard revealed 46 to 14 Mustangs. After receiving the subsequent kickoff the Eagles returned the ball 27 yards to the Eagles 28-yard line. After six plays the Eagles were forced to turn the ball over to the Mustangs on downs on their own 23-yard line. The Mustangs responded with a 3-play drive culminating in a touchdown followed by a 2-point conversion run with 7:40 left on the clock. With the score at 14 to 52 Mustangs, and a running clock, the Eagles returned the Mustang’s kickoff from their 15-yard line to their 30-yard line to begin a 9-play, 70-yard drive for the final touchdown of the game. The drive included a 38-yard pass from King (2) at QB to Boulter (19) to set up a 4-yard touchdown run by Brewer (8). With a 2-point conversion by Boulter (19) on a QB keeper up the center, the running clock elapsed ending the game on a score of Mustangs 54 to the Eagles 22.

END_OF_DOCUMENT_TOKEN_TO_BE_REPLACED

Benefitting the county, schools, and much more By Don Ireland   This year marks the 30th anniversary of casinos opening in the former little mining towns of Black Hawk, Central City and Cripple Creek, Colorado. In those early years, smoking was allowed inside ... END_OF_DOCUMENT_TOKEN_TO_BE_REPLACED