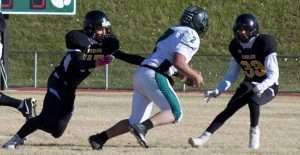 On Saturday, November 14th the Gilpin Eagles varsity football team played the Rangely Panthers on their home field in Rangely, Colorado. It was a sunny day with a chilly brisk wind when game started at 1:00 in the afternoon.

The Eagle’s head coach Craig Ball summarized the Gilpin-Rangley game as follows: “We traveled to the undefeated #5 ranked Rangely for our last regular-season game on Saturday. Our boys were confident in our chances to stay with the Panthers. We were within six points at the half 20-14 and felt that we could win this game if we played a solid and mostly mistake-free half. We scored first in the second half and tied the game and then kicked it deep to pin the Panthers deep in their own territory. We did a good job of causing a 3 and long situation and then we made a mistake in coverage. Our flow linebacker came off his man during a quarterback scramble and allowed an 80 TD pass. We were now down by 8 with three minutes left in the game. Our offense was ready and we drove to the Panther 10-yard line and had two great pass opportunities in the end zone to tie the game. On both occasions, we did not execute. It was a heartbreaking loss for our seniors. We play Elbert for our postseason game on Saturday.”

To begin the 4th quarter the Panthers continued their 7-play possession from the 3rd quarter for an additional nine plays before turning the ball over to the Eagles on downs on the Eagle’s 25-yard line. The Eagles organized a 75-yard, 11-play drive ending with a 7-yard rushing touchdown by King (2) to, again, tie the score with 5:00 left on the game clock. After a failed 2-point conversion by the Eagles the score was 20 to 20. The Eagle’s following kickoff resulted in a touchback giving the Panther’s possession of the ball on their own 20-yard line. After a gain of only three yards in 2 plays, the Panthers were able to get a receiver behind the Eagles defense to complete a long pass for a 77-yard touchdown that was followed up by a successful 2-point conversion. The new score was 28-20 Panthers. The Eagles recovered the Panther’s following on-sides kick on their own 35-yard line and from there drove to within 18 yards of the Panther’s end zone where, on a 3rd and 12, the Eagles missed a clear pass across the goal line with no defenders near. Then on the following 4th and 12, the Eagles missed another pass to an open man nearly in the end zone without defenders near. The result was a turnover on downs trailed by two Panther runs, followed by the Panther’s taking two knees to end the game with the Panthers ahead by eight points on a score of 28 to 20.

With their loss to the Rangely Panthers, the Eagles now have a record of 3 wins and 2 losses in league play and 3 wins and 3 losses overall. The Eagles have a final post season, non-league game scheduled for next Saturday, November 21, 2020 against the Elbert High School Bulldogs to be played on the Bulldogs home field in Elbert, Colorado.

END_OF_DOCUMENT_TOKEN_TO_BE_REPLACED

Benefitting the county, schools, and much more By Don Ireland   This year marks the 30th anniversary of casinos opening in the former little mining towns of Black Hawk, Central City and Cripple Creek, Colorado. In those early years, smoking was allowed inside ... END_OF_DOCUMENT_TOKEN_TO_BE_REPLACED