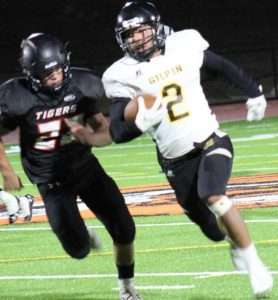 Following are Head Coach Craig Ball’s observations concerning last Friday night’s game: “Hayden invited us to their new field. It was the first game to be played at the Hayden Stadium and we were lucky to play in front of the largest crowd that we’ve seen this year. Our team came out hard and put up 14 points in the first half. Hayden is a tough team and scored twice in the last two minutes of the first half to tie the game. This could have really demoralized our team, but I think it galvanized us. We came out in the second half and scored 30 in a variety of ways. Our defense caused four turnovers, one being a scoop and score, and another was a pick-6. We next visit and play the number three Rangely Panthers on Saturday. We are looking forward to rising up and shocking the league with a win on hostile territory.”

The Eagles and Tigers scored equally during the 2nd quarter. The period opened with the Eagles in possession of the ball for three plays before turning the ball over to the Tigers on a 4th down incomplete pass. On the Tigers 7th play of its possession on their own 35-yard line, a forced fumble was picked up by Stephen King (2) of the Eagles and transported to the end zone for the first touchdown of the game. After coming up short on an attempted 2-point conversion the score shown Eagles 6 to Tigers 0. At the Eagle’s subsequent kickoff, the Tigers were stopped at their own 35-yard line. Unable to make 10 yards in four downs the Tigers were forced to punt on a 4th down from their 40-yard line. After a 23-yard punt return and a 43-yard run three plays later, both by King (2), the Eagles were looking at a 1st and goal from the Tiger’s 2-yard line. Blake Boulter (19) punched the ball in for an Eagles touchdown on a QB keeper up the middle followed by another Boulter (19) keeper for the 2-point conversion making the score 14-0 Eagles. Upon receiving the Eagles kickoff, the Tigers responded with a 9-play 70-yard drive for a touchdown and a 2-point conversion moving the score to 14-8 Eagles. The following Tiger’s kickoff was an on-sides kick that was fumbled by the Eagle’s line and recovered by the Tigers on their own 49-yard line. The Tigers took advantage by scoring another touchdown in only three plays including two completed passes for a gain of 50 yards. After an unproductive conversion attempt the score was tied at 14-14. The Tiger kickoff was a short kick returned to the Eagle’s 43-yard line by Kamron Brewer (8) and followed by two incomplete Eagles pass plays to end the first half of the game.

The 4th quarter was the most eventful of the game with both teams scoring multiple points. The Tigers were forced to turn the ball over to the Eagles on a 4th and 1 on the second play of the quarter when they were stopped short of a 1st down by the Eagle defense. The Eagles held the ball for only one play during which they turned the ball back over to the Tigers on a fumble. The Tigers, in turn, held the ball for only two plays on the 2nd of which they fumbled the ball, which was recovered by the Eagles on the Tiger’s 49-yard line. On the 3rd play after reclaiming the ball, the Eagle’s King (2) ran the ball up the middle for a 39-yard touchdown that was followed by a 2-point conversion carry by Boulter (19) fixing the score at 28-14 Eagles. After returning the following Eagles kickoff to their own 39-yard line, the Tigers drove 63 yards in seven plays for another touchdown followed by a 2-point conversion on a screen pass. With the scoreboard showing Eagles 28 to the Tigers 22, the Eagles returned the ensuing kickoff to their own 22-yard line but were forced to give up the ball again via a 4th down punt. The Tigers, in turn, were not able to complete a 1st and 10 and turned the ball back over to the Eagles on a 4th down incomplete pass on the Eagles 39-yard line. On the 3rd play of their subsequent possession, King (2) received a pitch on a sweep to the left and ran the ball for a 60-yard touchdown for the Eagles. Boulter (19) followed up with a 2-point conversion carry up the middle making the score 36-22 Eagles. The Tigers recovered the succeeding Eagles short kickoff on their own 40-yard line. On their 2nd play of the possession, with 9 yards to go for a 1st and 10, the Tigers attempted a pass play that was intercepted by the Eagles King (2) for a 59-yard pick-6. A follow-up 2-point conversion by Boulter (19) set the score at 44-22 Eagles. After recovering the Eagles following on-sides kick on their own 40-yard line, the Tigers responded with a touchdown of their own in four plays followed by a 2-point conversion leaving the final score at Eagles 44 to the Tigers 30. Upon taking possession of the ball after the Tigers kickoff, the Eagles ran one play for three yards and took a knee to end the game.

The Eagles record now stands at 3 wins to 1 loss in league play and 3-2 overall. The Eagles hope to improve their record when they face the Rangely Panthers in their next league game on Saturday, November 14 at 1:00 pm on the Panther’s home field in Rangely, Colorado.

END_OF_DOCUMENT_TOKEN_TO_BE_REPLACED

Benefitting the county, schools, and much more By Don Ireland   This year marks the 30th anniversary of casinos opening in the former little mining towns of Black Hawk, Central City and Cripple Creek, Colorado. In those early years, smoking was allowed inside ... END_OF_DOCUMENT_TOKEN_TO_BE_REPLACED