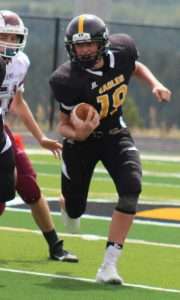 Last Saturday’s Gilpin County High School Eagles varsity football game pitted the Eagles against Merino High School of the Plains League. It was a tough day for the Eagles losing the game with no points scored to Merino’s 50. Eagle’s coach Craig Ball said he was pleased with the great effort shown by the Eagles and he was able to play a lot of freshmenand sophomores giving them experience against one of Colorado’s top well coached teams. There were some highlights such as a 27-yard pass to Gilpin senior Jessie Alexander and two Merino fumbles recovered by the Eagles. This is the first time that Merino has visited Black Hawk to play on Gilpin County’s new field.

The Eagles are gaining valuable experience in playing their first three games with teams from the Plains League. That League has produced Colorado State champions for the last four years in a row. The Eagle’s first two games were against Caliche ranked number 3 and Merino ranked number 5 in the state. On this Friday, September 13 the Eagles will travel to the Julesburg School District near the Colorado/Nebraska border to play last year’s number 1 ranked team in the state, Sedgwick County High School starting at 6:00 p.m.

END_OF_DOCUMENT_TOKEN_TO_BE_REPLACED

Where the dead get to tell their story By Jaclyn Schrock On Saturday, August 21, the Gilpin Historical Society held their annual Cemetery Crawl. Tickets allowed the shuttle of hundreds of guests from the Teller House parking lot to the Cemetery. Depending on v... END_OF_DOCUMENT_TOKEN_TO_BE_REPLACED