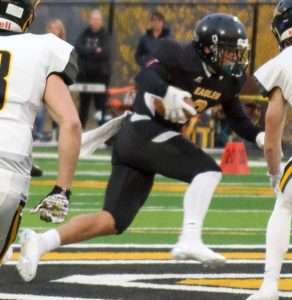 Against the Sargent High School Farmers

The Gilpin Eagles football team played its first game during the Colorado lockdown. The Eagles will play six games in the regular season. Due to the shortened season, the Colorado High School Activities Association (CHSAA) planned and scheduled games for each school throughout the state of Colorado. Gilpin drew the #9 ranked Sargent for game one.

After winning the toss, the Eagles received the opening kickoff. The Farmers presented only onside or short kicks throughout the game. The short kick was caught by the Eagle’s Ezra Williams (12) on the Eagle’s 39-yard line and returned to the 41 yard-line for a 2-yard gain. The Eagles held the ball for 8 downs including 1 first and ten and a total of 18 yards but turned the ball over on a 4th and 12 with an incomplete pass.  The Farmers put together an 8-play, 51-yard drive for the first touchdown of the game followed by a 2-point conversion making the score Eagles 0 to the Farmers 8 with 5:27 left in the first quarter. After another Farmer short kick and starting from their own 40-yard line, the Eagles built a 9-play, 57-yard drive to the Farmer’s 3-yard line. The drive included 2 first downs, a 22-yard carry by King (2) and 4 downs within 5-yards of the Farmers goal line and ended with an Eagle’s blocked field goal attempt. The Farmers took possession of the ball on the Eagle’s 7-yard line and progressed 37 yards in 5 plays before turning the ball back over to the Eagles on a fumbled pitch that was recovered by Blake Boulter (19) of the Eagles. After gaining 15 yards in 2 plays the Eagles ended the quarter by turning the ball over to the Farmers on an intercepted pass attempt.

The second half of the game began with an Eagles kickoff to the Farmers and a Farmers return of 22 yards to their own 34-yard line. The Farmers proceeded to drive 33 yards in 12 plays but returned possession of the ball to the Eagles on a 4th and 3 where they lost 2 yards on an Eagle’s blitz. The Eagles took possession on their own 15-yard line and held the ball for 4 downs. On 4th down and 4 yards to a first down the Eagles punted from their own 21-yard line. The punt went out of bounds on the Farmer’s 40-yard line where the Farmers started an 8 down drive for 46 yards to the Eagles 14-yard line where the period ended with neither team scoring during the 3rd quarter.

Gilpin’s Head Coach, Coach Ball said that the Gilpin offense missed some scoring opportunities in the first quarter of Friday’s football game under the lights here in Gilpin County. The weather and setting were perfect for a high school football game. This year the team has some size. Four players over 200 pounds is a first for the team in recent memory. “We have some size this year but we are young on the line,” said Coach Ball. The Sargent defense lined up with a deep safety to start the game, but with strong line play, the Gilpin offense was hard to stop up the middle. By the second quarter, Sargent had moved their safety up to play the run, opening up down the field options. Unfortunately, when the downfield routes opened up, the team was unable to connect. The offense finally scored against Sargent in the 4th quarter, with a 49-yard sweep play to Stephen King around the left side.

Gilpin’s defense played well, keeping the powerful Sargent offense to just 14 points in the first half. The defense came out strong in the second half and held Sargent scoreless in the 3rd. The defense caused 3 fumbles and Blake Boulter recovered all three of them. Gilpin held on two goal line stands in the second half to keep the game close. “The D was really flying around out there tonight and we caused turnovers that kept us in the game” said Coach Ball.

The next Gilpin Eagles game is scheduled for Friday, the 16th of October against the Vail Christian Saints. The game is to take place at Battle Mountain High School in Edwards, Colorado beginning at 7:00 pm.

END_OF_DOCUMENT_TOKEN_TO_BE_REPLACED

Where the dead get to tell their story By Jaclyn Schrock On Saturday, August 21, the Gilpin Historical Society held their annual Cemetery Crawl. Tickets allowed the shuttle of hundreds of guests from the Teller House parking lot to the Cemetery. Depending on v... END_OF_DOCUMENT_TOKEN_TO_BE_REPLACED