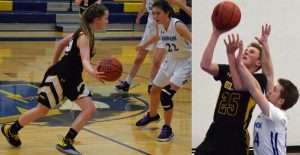 The Eagles boys’ varsity basketball season came to a close with their loss to the Dawson Mustangs in the Division 7 playoffs. It has been a challenging season for the boy’s team with a record of 4 wins to 16 losses. However, the season has been one of growth with a number of less experienced players acquiring valuable court time and a period of honing skills for the veteran players. The boys’ varsity has the advantage of being a young team with all of this year’s starters returning next season.

The Gilpin boys’ varsity ended their basketball season with a loss to the Dawson School Mustangs in the first game of the 2020 2A boys basketball District 7 tournament. The game was played on the Dawson’s home court in Lafayette, CO on February 25 at 6:00 pm.

In the first 3 minutes of the 2nd quarter the Eagles and Mustangs alternated scoring. The Mustangs completed a 3-pointer and 2 free throws while the Eagle’s Boulter (25) made 2 2-point field goals. During the remaining 5 minutes of the period the Mustangs scored 20 more points 6 2-point field goals, 2 3-pointers and 2 free throws while the Eagles added only 5 more points from a Lindberg (3) 3-pointer and a Boulter (25) 2-pointer. The half time scoreboard showed the Eagles with 22 points to the Mustangs 52.

The boys head coach Paul Hanson had the following to say about the season: “Yes I agree it was a growing season and it will be valuable to have some senior leadership next season along with a lot of experienced gained for all of our guys this year. Although you always want more wins, these guys competed well and came close in a number of games that they could have easily won.  They just came up a few plays short or got into some foul trouble, and thus had difficulty closing out some of those games. I think the experience they gained, and another year of development, will be the difference in competing at a higher level overall, and closing those games out with wins next season thus reaching their potential and having a successful winning season.”

Having placed 3rd in the Division 7 playoffs, Gilpin’s Lady Eagles are now slated to play in the Regionals. The girls are scheduled to play the Simla High School girls on Friday, March 6 at 3:00 pm on Simla’s home court in Simla, CO. Holly and CSSS play on Friday at 4:30 in Simla just after the Gilpin/Simla game. Winners of the Gilpin/Simla game and the Holly/CSSS game will play at 1:00 on Saturday at Simla HS. If the Gilpin girls lose either game, the season ends. Gilpin must win both games to advance.

The winner of Saturday’s game goes to the “great eight” portion of the state championship at the Budweiser Event Center in Loveland. That starts Thursday, March 12 and runs through Saturday, March 14.

In the first game of the 2020 2A girls’ basketball district tournaments – District 7, the Lady Eagles were pitted against the Highland Huskies of Ault, CO. The game began at 6:00 pm on the Eagles home court at Gilpin County School.

The Lady Eagles opened the game with a run of 8 points comprised of 1 3-point field goal each by Samantha Smith (2) and Jessica Wilhelm (30) along with a 2-pointer by Skyley Ramsey (12). The Huskies responded with an 8-point run of their own built on 4 straight unanswered 2-point field goals tying the score at 8-8 with just over a minute left in the 1st quarter. With about a minute left the Eagle’s Wilhelm (30) completed 2 free throws ending the period at 10-8 Eagles.

In the 2nd quarter the Huskies scored only 5 points secured by 2 2-point field goals and a free throw. Contributing to the Eagle’s tally was Camryn Ganz (22) with a 3-point field goal and a 2-pointer, and 1 2-pointer each by Wilhelm (30) and Lena Warren (11). The quarter ended with the Eagles ahead on a score of 19-13.

During the first 30 seconds of the final quarter the Huskies scored 2 2-point field goals followed by an Eagles time out. The Eagles appeared to come back from the time out with a plan. In the next 6 or so minutes the Eagles scored 12 points answered by only 2 Huskies free throws. Donors to the Eagles score with a 2-point field goal each were Ganz (22), Wilhelm (30), and Smith (1) while Ramsey added another 2-pointer plus 4 free throws. In the final seconds of the game the Huskies added 2 points in free throws while the Eagle’s Warren (11) ended the scoring with a 2-point field goal. The period ended with the Lady Eagles winning their first playoff game of the 2019-2020 season with a score of Eagles 46 to the Huskies 31.

The semi-finals for the 2A girls’ basketball district 7 playoffs were held at the Fredrick High School gymnasium in Fredrick, CO on Friday, February 28th. The Lady Eagles were matched in semi-final play against the Dawson Mustangs of Lafayette, CO.

The Mustangs came out strong in the first quarter scoring 10 unanswered points in the first 5 ½ minutes consisting of 1 3-point field goal 2 2-pointers and 3 free throws. In the final 2 ½ minutes of the quarter the Eagles Skyley Ramsey (12) completed a 2-point field goal and Alicia Johnson (20) completed 2 free throws ending the quarter at 4-10 Mustangs.

The Eagles opened the 2nd quarter with a 2-point field goal by Ganz (22). The Mustangs replied with an unanswered run of 9 points including a 3-pointer, 2 2-pointers and 2 free throws. Thru the rest of the quarter the Eagles scored 5 points with 2point field goals from Ganz (22) and Wilhelm (30) along with 1 free throw from Ramsey (12) while the Mustangs completed 2 2-pointers and a free throw ending the quarter at 24-32 Mustangs.

During the 4th quarter the Eagles scored only 4 points with 2 free throws each by Ramsey (12) and Warren (11). The Mustangs ruled the final period enhancing their score by 13 points from a 3-point field goal, 2 2-pointers, and 6 free throws. The game ended with the Eagles down by 17 points on a score of 28-45.

With the their loss to Dawson in the semi-finals Gilpin’s Eagles were slated to play the loser in the other semi-final game for third place in the Division 7 playoffs. That game was slated to be played in the same place on the following day Saturday, February 29th.

Gilpin’s Lady Eagles competed in a playoff game for 3rd place in the 2020 2A girls’ basketball District 7 tournament. The game took place on Saturday, February 29 at 10:00 am at the Fredrick High School in Fredrick, CO.

The Eagles had 2 separate unanswered runs of 7 points and 10 points in the first half of the 3rd quarter with inputs by Smith (2) with a free throw, Jessica Wilhelm (30) with 4 2-point field goals, Ganz (23) with 3 2-pointers, and by Ramsey (12) with 2 free throws. During the 2nd half of the period the Lions scored 5 points with 1 2-point field goal and 3 free throws while the Eagles increased their score by 11 additional points. The Eagles points came from 1 3-point field goal each by Smith (2) and Smith (1) along with 1 free throw and 2 2-pointers by Ganz (23). The 3rd quarter ended on a score of 50-23 Eagles.

In the 4th quarter the Lions only scores came in the first half of the period with 3 2-point field goals answered by 1 2-pointer by the Eagles Ganz (23). The Eagles completed the quarter by adding 9 more unanswered points by Alicia Johnson (20) with a 3-point field goal and 1 2-point field goal each by Lena Warren (11), Ramsey (12) and Tommie DiMauro (13). The game closed out with the Eagles ahead by 32 points with a score of 61-29 in favor of the Eagles.

END_OF_DOCUMENT_TOKEN_TO_BE_REPLACED

Benefitting the county, schools, and much more By Don Ireland   This year marks the 30th anniversary of casinos opening in the former little mining towns of Black Hawk, Central City and Cripple Creek, Colorado. In those early years, smoking was allowed inside ... END_OF_DOCUMENT_TOKEN_TO_BE_REPLACED