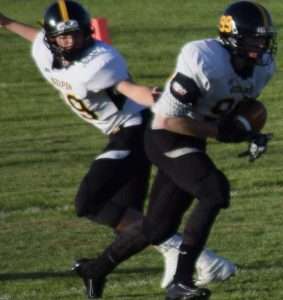 Last Friday’s game was played under the lights in Julesburg, Colorado against the Sedgwick County Cougars of the Plains League. Sedgwick County is the four-time defending champions in Colorado 8-man football and number 1 ranked so far this season. The only loss Sedgwick County has had over the last four years was to Merino HS in the last regular-season game of last year as they went on to win the state championship for the fourth time in a row.

The Eagles defense struggled during the first quarter giving up 38 points to the Cougars. Near the end of the 1st quarter the Eagles became the first team this season to score on the Cougars when Blake Boulter, Eagles number 19, threw a 69-yard TD pass that was caught on the Cougar’s 40-yard line by Stephen King, Eagle’s number 2. King was able to work his way behind the defense and outrun two close defenders for the touchdown. After a failed a 2-point conversion attempt the quarter ended on a score of Eagles 6 to Cougars 38.

Beginning the 2nd quarter the Eagles were able put together a 48-yard drive that ended with a turnover on a 4th down run attempt from the Cougar’s 32-yard line. On the Eagle’s second possession of the quarter a pass intended for King was intercepted and converted to a TD by the Cougars. The defense fared better in the 2nd quarter giving up two touchdowns ending the first half with a score of 6 to 54.

The second half began with a Cougars touchdown on a 65-yard kickoff return. After a 2-point conversion the score was Eagles 6 to the Cougars 62. The Eagle’s defense was inspired to step up, and prevented any further 3rd quarter scoring by the Cougars. After putting together a 32-yard, 7-play drive the Eagle’s Alex Jimenez, number 33, caught a 20-yard pass near the Cougar’s goal line but the ball was knocked out of his hands at the goal line and recovered by the Cougars in the end zone for a touchback. On their second play following the touchback, the Eagles caused a fumble which was recovered by the Eagles. The quarter ended with the Eagles still in possession.

On the Eagle’s third play in 4th quarter, Jessie Alexander, number 99, caught an 18-yard Boulter pass in the Cougar’s end zone for the Eagle’s second touchdown of the game. Boulter completed the 2-point conversion on a run up the middle. The Cougars put together one more drive for their last TD and a 2-point conversion. On the third down of the Eagle’s final possession, an attempted long pass to Stephen King was intercepted by the Cougars who then took a knee to end the game. The final score was Eagles 14 to the Cougars 70.

Eagle’s head coach Craig Ball said the boys really worked hard to compete with the best team in the state. We learned a lot about the effort it takes to play the best. I think that our non-league schedule is one of the toughest in the state and our boys can take the things that we’ve experienced in these types of games to get ready for our league play that starts on Friday at our Homecoming game against Hayden High School.

On Friday, September 20 at 7:00 p.m. the Eagles will be playing their Homecoming Football Game against the Hayden School District Tigers.

END_OF_DOCUMENT_TOKEN_TO_BE_REPLACED

Benefitting the county, schools, and much more By Don Ireland   This year marks the 30th anniversary of casinos opening in the former little mining towns of Black Hawk, Central City and Cripple Creek, Colorado. In those early years, smoking was allowed inside ... END_OF_DOCUMENT_TOKEN_TO_BE_REPLACED