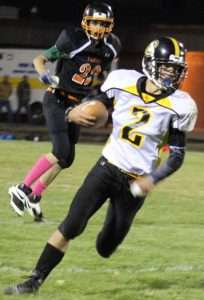 The Gilpin H.S. Eagles football team put a tiger in their tank – the Hayden Tigers football team, that is – on October 14, coming away with a 36-0 win in the away conference contest. Gilpin holds a 4-3 overall record, 2-1 in league action. Hayden is 3-4 overall and 1-2 league.

Gilpin excited their fans with 14 points in the first quarter and followed that up with 16 on the board in the third quarter and a final TD in the fourth.

Immordino was selected as Offensive and Defensive Player of the Game for 7 rushes, gaining 163 yards, including an 84-yard run that resulted in a touchdown on the Eagles’ first offensive play, plus his other TD.

The Eagles also boasted 87 tackles, including 55 solo and 32 assisted. Immordino, #47 Josh Trujillo, and #89 Dante Nadeau were tops in solo tackles with 9 each, and #45 Manny Gomez led in assisted tackles with 8.

Nadeau sacked Hayden’s QB for a 6-yard loss to the Tigers. Boulter, Immordino, and Nadeau hurried the quarterback numerous times.

Gomez and Trujillo did credit to the Eagles with passes blocked. Immordino and Alexander each recovered fumbles.

The Lady Eagles’ varsity faced an older and more experienced team; Dayspring’s starting lineup included only juniors and seniors, while Gilpin played 3 freshmen and 3 sophomores. The young team puts in a good, consistent effort and has grown in skill throughout the season.

#15 Jessica Wilhelm was kills leader for the Lady Eagles with 10, followed by #6 Alex Martin with 8. Gilpin’s effort yielded 24 kills, while Dayspring had 41. Martin had 2 serving aces, #5 Bailey Hobson-Kroll had 1, and #16 Shania Gonzales had 1. Dayspring had 10 total aces.

#9 Nicole Adams impressed with 4 solo blocks and Wilhelm with 1; Dayspring had 3 total.

Nadeau was also the leader in serves received with 24 of 51 for Gilpin. Dayspring received 45.

Martin was first in Gilpin kills with 9; #4 Kasen Nelson and Wilhelm had 5 kills each, for a team total of 19. DC had 42 kills. Gilpin athletes who slammed serving aces were Hobson-Kroll Martin, and Wilhelm. DC had 10 aces. Adams again led the Eagles in solo blocks with 2, and Wilhelm had 1, to tie with DC’s total of 3.

The two teams were close in digs totals; Gilpin led the Thunder 57-53. Lepro put in 18 ball handling assists for Gilpin; DC had 39. Nadeau was first in serves received with 23, followed by Martin with 20. Gilpin’s total was 57; DC’s was 39.

END_OF_DOCUMENT_TOKEN_TO_BE_REPLACED

Where the dead get to tell their story By Jaclyn Schrock On Saturday, August 21, the Gilpin Historical Society held their annual Cemetery Crawl. Tickets allowed the shuttle of hundreds of guests from the Teller House parking lot to the Cemetery. Depending on v... END_OF_DOCUMENT_TOKEN_TO_BE_REPLACED