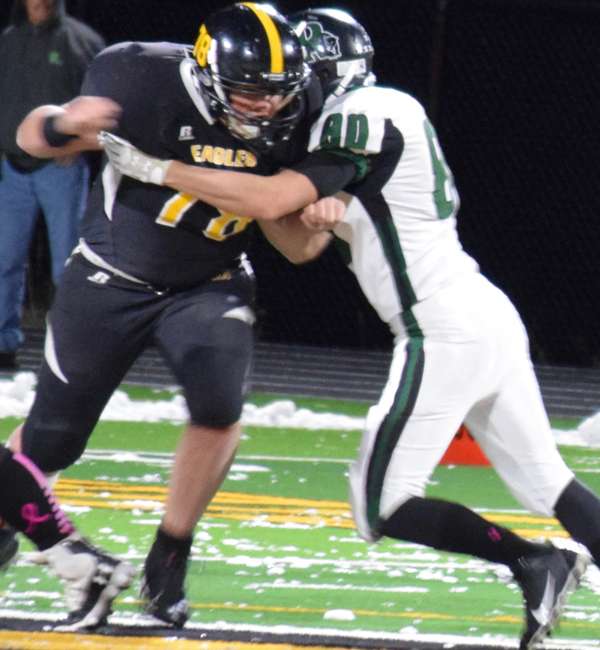 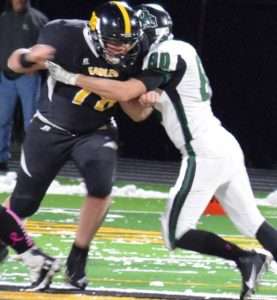 Last Friday night, October 25, the Gilpin Eagles hosted the Rangely Panthers at home under the lights for a chilly nighttime football game. Starting at 7:00 p.m. the game’s attendees were treated to an exciting evening of high school football competition including high scores, final seconds touchdowns, and multiple overtimes.

The game opened with an Eagles kick-off to the Panthers followed by a Panthers 13-play, 54-yard drive culminating in a short pass into the Eagle’s end zone for the first touchdown of the game. The Panther’s conversion attempt failed on an incomplete pass resulting in a 0 to 6 score in favor of the Panthers. On their first possession of the game the Eagle’s held the ball for seven plays ending with a 36-yard touchdown pass to Stephen King (2). The Eagle’s followed-up their first TD with a pass to Kamron Brewer (8) in the end zone for a 2 point conversion giving the Eagles a 2-point lead on a score of 8 to 6. The Eagle’s following kick-off by Kamron Brewer (8) bounced into the Panther’s end zone giving the Panther’s possession on their 20-yard line. It took the Panthers only five plays to span the remaining 80 yards for another TD with only 11 seconds left on the clock. After an unsuccessful conversion attempt the Panthers drew ahead 8 to 12. The Eagle’s returned a Panther’s short kick to the Eagle’s 40-yard line. A determined Eagle’s offense returned to the field with only a few seconds left in the quarter. On their 1st play of the possession Eagle’s QB, Blake Boulter (19) completed a short pass up the middle to King (2) for a 60-yard touchdown play as the quarter ended. The TD was followed with another completed pass to Brewer (8) in the end zone for a 2-point conversion ending the 1st quarter with a score of Eagles 16 to the Panthers 12.

The 2nd quarter commenced with a Panthers return of the Eagles kickoff to the Panthers 45-yard line. This time the Panthers took only three downs to cover 55 yards for another touchdown followed by a pass into the Eagle’s end zone for a 2-point conversion making the score Eagles 16 to Panthers 20. Not to be outdone, the Eagles recovered the following Panther’s on-sides kick on the Eagle’s own 48-yard line and then took only two plays, the second of which was a 44-yard TD pass to King (2), to score again. After an unsuccessful Eagle’s 2-point conversion attempt the scoreboard displayed 22 to 20 in favor of the Eagles. The Panthers responded with another long drive, this time 56 yards in eight plays, for a TD followed by a failed conversion making the score 22 to 26. The Panthers followed with an on-sides kick that was fumbled by the Eagle’s receiving team and recovered by the Panthers. The Eagles defense stepped up to hold the Panthers for five plays and a turnover on downs. The Panther’s defense then held the Eagles for four downs to force a punt. The half ended with the Panthers retaining the ball for 10 plays, but not being able to score.

The 2nd half commenced with a Panthers kick-off to the Eagles that went out-of-bounds on the Panthers 49-yard line. The Panther’s defense held the Eagles for four plays and a turnover on downs. This was followed by the Eagle’s defense holding the Panthers for four plays and a punt. The Eagles, after holding the ball for eight plays, turned the ball over on downs after which the Panthers took nine plays to score another TD and 2-point conversion, setting the score at 22 to 34 Panthers, with one minute remaining in the quarter. Stephen King (2), of the Eagles kick-off return team, was able to move up from the backfield to pick up the Panther’s short kick and carry the ball for 62 yards and another Eagle’s touchdown with 47 seconds remaining in the quarter. After an unsuccessful 2-point conversion run, the score was 28 Eagles to 34 Panthers. After receiving the following Eagles kick, the Panthers ran the quarter clock out in two plays without scoring.

The Panthers launched the 4th quarter with a 68-yard, 10-play drive, counting two of the plays from the previous quarter, for a touchdown and followed it up with a 2-point conversion making the score Eagles 28 to the Panthers 42. After a 1-yard return of the Panther’s following kick-off, the Eagles initiated a 2-play drive from their own 17-yard line. On the second play Boulter (19) connected with King (2) on a pass deep into the Panthers territory for an 83-yard Eagle’s touchdown followed by a King (2) carry for the 2-point conversion. The score was now Eagles 36 to Panthers 42. The Panthers returned the Eagles kick-off to their own 29-yard line to begin an 11-play, 43-yard drive ending in a turnover on downs on the Eagles 28-yard line. On the first play of the Eagles possession, Boulter (19) again connected with a pass to King (2), this time for a 72-yard touchdown. After a no-score on the conversion attempt the game was tied at 42 to 42. With the Eagle’s following kick-off dipping out-of-bounds on the Panther’s 43-yard line, the Panthers mounted a 57-yard drive to score with just 56 seconds left on the game clock. After an unproductive conversion attempt the score was 42 to 48 Panthers. The Panther’s following on-sides kick went out-of-bounds on the Eagles 48-yard line from which the Eagles fashioned a 5-play drive finishing with a 28-yard TD run by King (2) followed by an unsuccessful conversion to, again, tie the score but this time at 48 to 48 and with only 19 seconds on the clock. The game ended with the Eagles kick-off and three scoreless plays by the Panthers thus forcing the game into its first overtime.

In the overtime play there was no clock, however, each team was afforded four downs from the 10-yard line to score and then convert. After each team has had its opportunity on offense the team with the highest score wins. If both teams score equally or if both teams fail to score, then the game is thrust into another overtime.

In the opening overtime the Eagles were provided the first opportunity to score from the 10-yard line. On a handoff on their first down the Eagle’s fumbled the ball, which was recovered by the Panthers, thus, ending the Eagle’s chance to score during that overtime. The Panthers then spent their opportunity to score in three plays that also ended with a turnover on a fumble, extending the game into a second overtime.

In the second overtime the Panthers were afforded the first possession. On their first play the Panthers punched the ball in for a TD. On their conversion attempt they tried a QB sneak but were stopped by the Eagle’s defense generating a game score of 48 to 54 Panthers. On the Eagle’s first play of their possession they incurred a penalty that set them back to the 20-yard line to replay the 1st down. The next down was intended to be a pass play but the QB, Blake Boulter (19), saw an opportunity to slip through a scattered Panther’s line and pass defense and did so straight up the middle for an Eagles TD. On the following conversion play the Panthers were able to stop a run in the Eagle’s backfield. Again, the score was tied, this time at 54 to 54, prolonging the game with an added overtime.

The third and final overtime of the game began with the Eagles on offense. On the Eagle’s first play an attempted pass to Brewer (8) was intercepted by the Panthers, which blocked any further opportunity for the Eagles to score during that overtime. On the second play of their possession, the Panthers were able to drive the ball in for a TD ending the game on a score of Eagles 54 to the Panthers 60.

In the words of the Eagle’s head coach Craig Ball: “Wow… what a game on Friday night. Our #2 showed why he is sitting at the #1 spot for all receivers in Colorado 8-Man Football. When we scored with 19 seconds left in the game we had a big decision to make on how we wanted to call our play for the go-ahead conversion. I took a long look at our options and thought about what so many play callers have said to themselves over the years. When the game is on the line, you want the ball in the hands of your playmaker. We were unsuccessful with our conversion attempt, which put us in overtime, and as I have second-guessed myself for the unsuccessful call, I remind myself about the real reason I called on #2 once again. I’ve seen #2 make plays in ways that aren’t drawn up in any playbook and for me, and many around this state that have seen #2 play… when the game is on the line you want the ball in #2’s hands. It didn’t work for us that time, but he could have just as easily reversed his field like we all have seen him do over the years and scored on that conversion to win the game. As a team we played a gutsy game and I’m very proud of the way we kept coming back and overcoming adversity. Our defense really stiffened up in the 4th quarter and in the overtime periods to give us a real chance at beating Rangely. I just can’t say enough about our effort and I saw real potential in this team, as they became the tough football players everyone there that night could truly see.”

The Eagle’s next and final game of the season is scheduled for Friday, November 1st against the West Grand Mustangs at West Grand High School, 208 12th St, Kremmling, CO 80459 at 7:00 p.m. Hope it’s not in the snow! 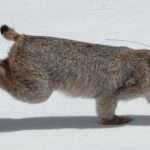 Lynx reintroduced 20 years ago in Colorado
Next Article 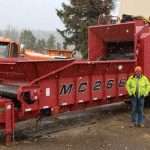