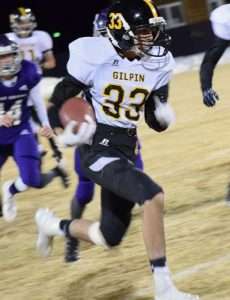 In Kremmling vs the West Grand High School Mustangs

The Eagles final game of the football season was played last Friday night at 7:00 p.m. in Kremmling, Colorado against the West Grand High School Mustangs. The field was clear, but surrounded by piles of snow that had been removed from the field to let the sun complete the job. It was a cold night with a breeze that significantly boosted the wind-chill factor. West Grand came into the game ranked 2nd in the League with a record of five wins and one loss to #1 ranked Vail Christian.

The 1st quarter opened with a Mustang short kick to the Eagles and a fumble resulting in a turnover on the first play of the game as the Mustangs recovered the ball. Taking advantage of the turnover, the Mustangs mounted a 6-play, 52-yard ground game to score a touchdown and complete a 2-point conversion to put them up by 8 points. The ensuing kickoff was received returned by Alex Rodriguez Jimenez (33) who returned the ball 23 yards to the Mustang’s 42-yard line. On the Eagle’s third play after the kickoff the Mustangs intercepted the Eagle’s first pass attempt of the game. The Mustangs confirmed the strength of their ground game with a 58-yard drive in five plays for a touchdown and another 2-point conversion for another 8 points. On the following Mustang kick-off, the Eagles again fumbled a short kick resulting in another turnover. This time the Eagles defense allowed 1st and 10s on each of the Mustang’s first two plays, but then held them for four downs forcing the Mustangs to punt from their own 45-yard line. After the punt the Eagles began their possession on their own 23-yard line. Over the next 5 plays, including a sack and a 10-yard penalty, the Eagles were forced to punt on a 4th down from their own 5-yard line. The Mustangs returned the kick to the Eagles 8-yard line. It took the Mustangs four more plays to reach the Eagles end zone for another touchdown followed by an unsuccessful 2-point conversion attempt. The score was now Eagles 0 to Mustangs 22. After the kickoff and on the 5th play of the Eagles possession, the Mustangs intercepted a pass for another Eagles turnover, on errors. The quarter ended with three Mustang downs but no further scoring.

After a modest performance in the first half the Eagles defense came back considerably tougher to hold the Mustangs scoreless in the second half of the game. The 3rd quarter opened with an Eagles kick-off to the Mustangs who returned the kick to their own 37-yard line. The Eagle’s defense stepped up holding the Mustangs to a gain of only 13 yards in seven plays ending with a punt on their 4th down. The Eagles held the ball for only four plays with an unsuccessful run attempt on 4th down resulting in another turnover on downs. On the first play of the Mustangs next possession, the Eagle’s Jessie Alexander (99) recovered a Mustang QB fumble on the snap for a turnover favoring the Eagles. The Eagles then initiated a drive from their own 34-yard line including a deep pass to King (2) for a 36-yard gain, a pass to Brewer (8) for 8 yards, and a 17-yard run by King (2) reaching the Mustang’s 5-yard line with a 1st and goal as the quarter ended.

As the 4th quarter opened the Eagles continued their 4-play drive from the third quarter by adding another three plays culminating in a touchdown run by the Eagle’s King (2). After an unsuccessful conversion attempt the Eagles were finally on the scoreboard with a score of Eagles 6 to the Mustangs 44. At the Eagle’s kick-off, the Mustangs fell on the ball on their own 38-yard line. The Eagle’s defense limited the Mustang’s possession to four downs forcing a punt, on 4th and 15, from their own 28-yard line. The game ended on a 4-play possession by the Eagles and with no further scoring.

Eagle’s Head Coach, Craig Ball had the following comments: “It was a season of growth for our football team and program. It was an emotional end to the season for seniors. We played more as a team this year and found success in multiple areas. Our defense was starting to learn how to move off blocks and the tackling was much-improved game over game. Over half of our team was comprised of freshmen and sophomores, so it was an important season for our program because we were able to get these young boys a chance to play in games against top the top teams in the league. I’ve always believed that if you are going to compete in the playoffs you are going to have to play the best of the best during the regular season. Six of the nine teams we played this year ultimately made the playoffs and that type of schedule really helps a team grow for the next year. Our team will start preparations for next year by weightlifting before school and throughout the summer. We will start our new season with new freshman in May and we will attend a Nebraska football camp in June. I’m really proud of my team’s resilience throughout the season and we are looking forward to getting back to work for next season.”

END_OF_DOCUMENT_TOKEN_TO_BE_REPLACED

Benefitting the county, schools, and much more By Don Ireland   This year marks the 30th anniversary of casinos opening in the former little mining towns of Black Hawk, Central City and Cripple Creek, Colorado. In those early years, smoking was allowed inside ... END_OF_DOCUMENT_TOKEN_TO_BE_REPLACED