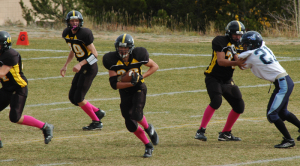 The Eagles’ field was a bulwark of black and gold. Gilpin’s school band, directed by Gary Haarbye, pepped up the crowd, and the seniors’ homecoming float, with its formidable giant eagle, perched at the far end of the gridiron. Chili cook-off entries were received by the Booster Club. The junior class and the Boosters sold buttons with photos of the football and volleyball players and cheerleaders to help raise money for the junior class.

Everyone quieted as student Sarah Trujillo sang “The Star-Spangled Banner,” and the game was on!

The Phoenix played a passing game, while the Eagles relied on the tried-and-true “hard charge” up the field. Gilpin’s defense swarmed all over the hapless Justice ball carriers, with Dziedzic, Correa, Sam Ghaffari, Manny Gomez, Jon Lovett, and Josh Trujillo figuring prominently in bringing them down. The Eagles’ Bjorn Tomlinson hurried or sacked the Phoenix QB on several occasions. Both teams lost quite a bit of yardage due to penalties.

Players of the game were Eryk Lorenz, Overall Player, who recovered one fumble, made 6 total tackles, and was an offensive blocking standout; Matt Immordino, Offensive Player, who had 267 yards rushing, made 4 touchdowns and 4 conversions, and scored 32 total points; and Bjorn Tomlinson, Defensive Player, who made 10 tackles, 1 tackle for a loss of 7 yards, and 1.5 sacks.

In spite of a weak record, Justice showed its mettle by scoring the first touchdown of the game within 15 seconds, making the score 6-0.

Gilpin responded with a short march down the field and a touchdown by sophomore Matt Immordino, who broke the 1,000-yard mark for carries during the game. The TD was followed by Chase Boulter’s conversion, making the score 8-6 Gilpin.

A few minutes later, Immordino strolled into the end zone again, followed by the two-point conversion, to make the score 16-6 Gilpin.

A nice Justice pass was deflected by Dziedzic, and with just 32 seconds to go in the quarter, Immordino ran in another TD, followed by the conversion by Tomlinson. 24-6 Gilpin.

The second quarter saw a slight rally by Justice with a pass completed near the 50-yard line and a run down the sidelines. Gilpin stripped the ball, which bounced and was picked up by the Justice runner, who hopped into the end zone to make it 24-14. Dziedzic responded with two TD’s to bring the score to 36-14. A highlight of the quarter was a Justice pass intercepted by Lorenz near the end zone just before halftime.

The third quarter saw Immordino making two TD’s, with two good conversions. Lovett caught a Boulter pass in the end zone for yet another TD, with two points for a 52-14 score. On Justice’s possession near the end of the quarter, Immordino stripped the ball and ran to Gilpin’s 20-yard line before he was brought down.

Early in the fourth quarter, an Eagle pass was completed in the end zone for a touchdown; Immordino worked his way through a mob for the two-point conversion, for a 60-14 score. With two minutes to go in the game, Justice had the ball and made a nice long completed pass, running into the end zone for a final TD, and the final score was 60-20.

The crowd was entertained at halftime by an amazing 63 members of the Pee Wee Cheerleading Squad. Following their performance, the high school cheerleaders did a dance routine.

Donations were accepted at the game to support Miles Pancoast and Nick Kassera as they recover from a recent auto accident; please see this issue of the Weekly Register-Call for information.

The Eagles visit Elbert on Friday, October 24, for their last regular season game.

The game was preceded by recognition of both teams’ senior players. The young women gathered with their parents on the court and were presented with flowers and words of praise for their accomplishments.

Although the Panthers have had a tough season, they gave the Eagles quite a workout. Nederland was first to score, but Gilpin came back to win the first set 25/19. The second set started with Nederland again scoring first and grabbing several points before Gilpin was able to get on the board. When the score was tied 8-8, the Eagles began moving ahead and never looked back, winning the second set 25/15. The third set started the other way around, Gilpin scoring rapidly and Nederland struggling to catch up. It looked as through the Eagles would run away with the set, but the Panthers began to move and came within a couple of points before Gilpin pulled away to win 25/17.

Over one thousand dollars was raised from the proceeds of the game to support the injured Nederland football players.

In other games, Gilpin won over Shining Mountain (Boulder) 3-0 on October 14 at home; they lost to North Park (Walden) 3-1 on October 16 in another home game.

Gilpin hosted Longmont Christian on Tuesday, October 21 at 6:00 p.m. in the district quarter-finals; results to be announced.

END_OF_DOCUMENT_TOKEN_TO_BE_REPLACED

Where the dead get to tell their story By Jaclyn Schrock On Saturday, August 21, the Gilpin Historical Society held their annual Cemetery Crawl. Tickets allowed the shuttle of hundreds of guests from the Teller House parking lot to the Cemetery. Depending on v... END_OF_DOCUMENT_TOKEN_TO_BE_REPLACED