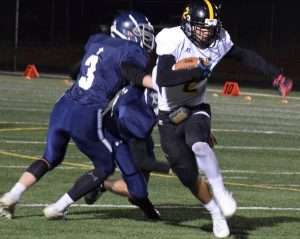 Versus the undefeated Vail Christian Saints

Last Thursday night’s Gilpin Eagle’s football game was played under the lights in Edwards, Colorado against the Vail Christian Saints. With 5 wins and 0 losses so far this year, the Saints are ranked number 1 in our Northwest (8-Man) Football League and ranked number 4 in Colorado Class A-8 Man Football.

Thursday’s first quarter started poorly for the Eagles with weaker than expected defensive and offensive play. Upon receiving the kickoff the Eagles turned the ball over on downs on their first possession. The Saints took only five plays to score a touchdown complimented by a 2-point conversion pulling ahead of the Eagles by 8 points to 0. On the following kickoff the Saints recovered an on-sides kick for an Eagle’s turnover on the Eagles 35-yard line. On the second play of their possession, the Saints scored another TD with a 17-yard pass into the Eagles end zone followed by a 2-point conversion bringing the score to 0-16. After a 17-yard kickoff return by Stephen King (2), the Eagles were forced to punt on their 4th down. The Saints responded with a 7 play, 64 yard drive for their third TD and conversion making the score 0 to 24 in favor of the Saints. After another on-sides kick and recovery by the Saints, this time on the Eagles 49-yard line, they took only three more plays to score again accompanied by a 2-point conversion producing a score of 0 to 32. Following a 22-yard kickoff return the Eagles were again forced to punt on the 4th down. The Saints came back with a 5-play, 61-yard drive for the final TD of the first quarter finished with a 2-point conversion with 1:59 left on the 1st quarter clock. The resultant score of 0 to 40 triggered a running clock for the remainder of the game. The Saints kick-off went out-of-bounds on the Eagle’s 35-yard line. The quarter ended with an Eagles first down incomplete pass and a pass interference call on the Saints placing the ball on the 50-yard line.

After a disappointing first quarter, the Gilpin Eagles showed real grit as they rallied to put hard earned points on the scoreboard and hold the Saints scoreless in the 2nd quarter. The Eagles opened the quarter with a hard-hitting 8-play drive for 22 yards finishing with a Stephen King (2) run up the right side for a 28-yard touchdown. After an unsuccessful 2-point conversion attempt the score became Eagles 6 to the Saints 40. With 6:39 left on the time clock the Saints put together a 37-yard drive, but the 2nd quarter time ran out as the Eagle’s defense held fast.

Opening the second half, it was the Eagle’s turn to kick-off to the Saints, whose 9-yard return was stopped on their own 48-yard line. With the Saints failing to make a first-and-ten and on their 4th down, the Eagles sacked the Saints QB on their 35-yard line for a 10-yard loss causing a turnover on downs. On the 4th down of the Eagles subsequent possession, the Saints forced an in-the-air fumble on an Eagle’s attempted pass, which the Saints recovered and carried for a touchdown. The Saints then attempted an extra-point field goal, which was blocked by the Eagle’s Blake Boulter (19) bringing the score to Eagles 6 to the Saints 46. The Saint’s following kick-off went out-of-bounds on the Eagle’s 35-yard line. On the first down following the kickoff, the Eagle’s snapped the ball directly to Stephen King (2) who ran the up the middle then to the left edge and all of the way back to the right edge through a field full of chasing Saints for a 65-yard touchdown. Blake Boulter (19) supplemented the TD with a 2-point conversion making the score 14 to 46. The Saints kick-off return was stopped on their own 30-yard line as the third quarter clock expired.

The fourth quarter started with a fired-up Eagle’s defense stepping up to contain a Saints 35-yard, 9-play drive ending with a turnover on downs on the Eagle’s 35-yard line. The Eagles responded with an 8-play drive for 52 yards including four first-downs. The Eagles drive culminated in a 13-yard run by King (2), with a dive into the right corner of the Saints’ end zone for the final TD of the game just as the game-clock expired. Eagle’s Jessie Alexander (99) drove the ball in for a 2-point conversion. The game’s final score was posted at Eagles 22 to the Saints 46.

With 22 points each in their games against the Saints, Gilpin and Rangley have chalked-up the highest scores against undefeated Vail Christian so far this season. The Eagle’s next game will be played under the lights at home against the Rangley Panthers. The game is scheduled for Friday, October 25 at 7:00 p.m.

END_OF_DOCUMENT_TOKEN_TO_BE_REPLACED

Benefitting the county, schools, and much more By Don Ireland   This year marks the 30th anniversary of casinos opening in the former little mining towns of Black Hawk, Central City and Cripple Creek, Colorado. In those early years, smoking was allowed inside ... END_OF_DOCUMENT_TOKEN_TO_BE_REPLACED