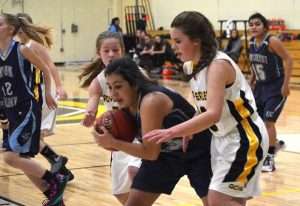 Union Colony Timberwolves take a side trip on Pickle Gulch

The basketball teams from Union Colony Prep of Greeley (UC) had a little side trip as they came to visit the Gilpin High School Eagles for league games on Tuesday, January 24. Junior varsity teams were to start at 4:00 that afternoon, followed by the girls’ varsity at 5:30 and the boys’ varsity at 7:00. Due to a little pardonable confusion, the Timberwolves were late.

The Eagles waited and waited for their rivals to arrive, passing the time in warm-up practice. When they had not appeared by game time, Gilpin’s athletic director, Jeff Schuessler, phoned UC’s athletic director to report that the Timberwolf teams had not shown up. UC’s director then phoned one of the coaches, whose cell reception was poor, to learn that their bus was stuck in the snow in Pickle Gulch. So near, and yet so far.

It seems the Timberwolves’ bus, a large tour bus rather than a typical school bus, had actually pulled into the Gilpin school drive around 3:45 p.m. Right on time. The bus driver decided he should pull the bus up in back of the school and thought Pickle Gulch was the way to go. (We might be able to blame MapQuest for that misunderstanding.) After going 1.8 miles on the Pickle Gulch road to the campground turnoff, the driver and team realized that wasn’t going to get them behind the school at all. The driver tried to turn the bus around, but regrettably, buried it.

School Resource Officer Lee Ramsey had heard that there was a bus missing. When he received a message from the school’s bus supervisor, Dawayne Weaver, that a bus was stuck on the Pickle Gulch road, Ramsey knew the mystery was solved.

Ramsey went to the scene and found the bus across the road buried in snow on both ends. The driver and coaches were putting chains on. Ramsey enlisted Weaver to send Gilpin’s two small buses to fetch the team and shuttle them to the gyms so they could at least play their games. It took some time, but at 5:00 p.m., about four dozen shivering but relieved athletes and their coaches filed into the building and made their way to the locker rooms. In the interests of time, the junior varsity teams played just two eight-minute halves before the varsity events.

During the games, Ramsey worked to assist the driver in extricating the bus. Their task was made more stimulating by temps in the single digits and a penetrating wind. The chains were on, and the driver had dug around the tires, but he was reluctant to try to back up. He preferred that a tow truck be called, although Ramsey said it would be an extremely expensive solution – about $2,000. The driver was adamant, and a tow was called. Meanwhile, Ramsey continued to persuade the driver to just try backing up about three feet and then to try driving out. Finally, the driver agreed to do so. Lo and behold, he made it!

The bus driver followed Ramsey to the school. The tow truck was canceled. And, everyone lived happily ever after, including the UC varsity teams who, after all that, actually won the games.

Gilpin boys’ varsity team was overcome 60-44 by UC. They are now 2-10 for the season, 1-4 in league play. Top scorer for the Eagles was Alex Wilhelm with 13 points, followed by Will Lorenz with 10. The Eagles had 34 total rebounds; Austin Boulter was the rebound leader with 5 offensive and 7 defensive. The team garnered 7 assists, 9 steals, 4 blocks, and 7 deflections.

The varsity Lady Eagles were conquered by UC 39-16. Their season record is 4-9, with a 1-5 league tally. Jessica Wilhelm was the scoring leader for Gilpin with 6; Aspen Nadeau and Lena Warren came in with 4 points each. Wilhelm also led in rebounds with 2 offensive and 8 defensive to add to the team’s total of 25. Berkley Davis was Player of the Game.

Gilpin played the Highland Huskies at Ault on January 27. The boys were overwhelmed 62-26, while the girls suffered a 50-29 loss.

END_OF_DOCUMENT_TOKEN_TO_BE_REPLACED

Benefitting the county, schools, and much more By Don Ireland   This year marks the 30th anniversary of casinos opening in the former little mining towns of Black Hawk, Central City and Cripple Creek, Colorado. In those early years, smoking was allowed inside ... END_OF_DOCUMENT_TOKEN_TO_BE_REPLACED