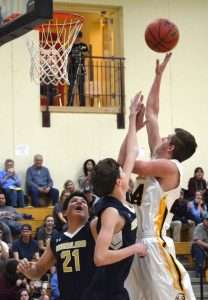 Both boys’ and girls’ varsity soar over rival Nederland Panthers

The Gilpin Eagles varsity teams boosted their season record last week with several wins, including victories on the home court over the Nederland Panthers, Denver Academy Mustangs, and South Park (Fairplay) Burros. The boys won over all three of their opponents; the girls took a loss to South Park and did not play Denver Academy.

“They are playing some really good basketball right now.  We just won three games in a row, and have a chance of winning some more league games in the next week. Our goal is to keep the momentum going in the remaining games as we prepare for the district playoffs,” commented Paul Hanson, the boys’ head coach.

The games with Nederland were held on Thursday, February 2. Gilpin boys won 67-37, giving them a 3-4 league record and 5-10 overall. The Gilpin girls topped their rivals 33-18 and now have a 2-5 league tally, 5-10 overall. Nearly all of the Eagles players had a chance to get in the game and performed well.

Nederland, which brought only a few players, has struggled this season while the high school has dealt with personnel issues. A number of athletes on the football and basketball teams have recently quit athletics in protest over the firing of popular football coach Aaron Jones.

According to a Fox 31 Denver News report last month, the Boulder Valley School District decided not to renew Jones’ coaching contract. He will, however, remain on the staff as a teacher. About 75 students walked out of class in protest at the decision.

Players and parents were upset that they were not told the reason for the firing. Fox 31 reported that the district said it cannot discuss personnel issues and will not inform the community of the reasoning behind the decision. The district did hold a meeting so students and parents could provide comments about the athletics department.

Emerald Murphy, Nederland’s athletic director, has been with the district for a year and a half; during that time, several coaches have been let go. Many parents expressed their belief that these coaches should still be employed by the school and are calling for Murphy’s removal by the end of the school year, according to the Fox 31 story.

The Fox 31 report also said a petition has been started to reinstate Jones to his former position and has hundreds of signatures.

Despite these problems, the Nederland athletes played with spirit during the contest with the Eagles, and Panther fans encouraged their teams enthusiastically.

Several players led the Gilpin boys with double digit scores: Matthew Immordino with 19 points, Austin Boulter with 13, Alex Wilhelm with 12, and John Immordino with 10. Wilhelm and Will Lorenz sank 3-pointers. Boulter was the rebounding leader with 6 offensive and 6 defensive, while J. Immordino grabbed 6 offensive and 1 defensive to add to the team total of 42 rebounds. Nick Peterson was first in assists with 4. The Eagles had an impressive 20 steals, led by M. Immordino with 4. No stats were available for the Panther boys.

Girls’ point leader and Player of the Game was Cicely Lepro with 17, including three 3-point field goals. Jessica Wilhelm came in with 8 points. Gilpin had 29 total rebounds. Berkley Davis was tops in assists with 5, and Aspen Nadeau snatched 4 steals.

Nederland girls’ top scorer was Karen Sorokach with 8 points, followed by Lili Lindstrom with 5. The Panther girls grabbed 37 rebounds, including 13 by Linnaea Thibedeau.

Thibedeau was a bit unsteady for a time after she got bumped in the first quarter of the girls’ game, but was able to return after a rest. Eagles’ player Braedyn Perez sustained a leg injury in the third quarter during the boys’ battle and was sidelined at that point.

The Eagles boys whipped the Denver Academy Mustangs 69-38 in home conference play on January 31. The first half of the game was a close contest, ending with the score at 32-25 Gilpin. The Eagles came out recharged for the second half, shooting 37 points, while their opponents only managed 13. M. Immordino was the decisive scoring leader with 24, followed by Boulter with 13 and Peterson with 11. Peterson grabbed 10 rebounds and Boulter 9.

Gilpin boys edged past the South Park Burros 49-45 in a home court non-league effort on February 4. The Burros hold a 7-7 overall record. The Eagles were helped by the fact that they had only 9 turnovers, while South Park gave up the ball 18 times.

The Lady Eagles were defeated 41-28 by South Park, which holds an 8-7 record.

END_OF_DOCUMENT_TOKEN_TO_BE_REPLACED

Benefitting the county, schools, and much more By Don Ireland   This year marks the 30th anniversary of casinos opening in the former little mining towns of Black Hawk, Central City and Cripple Creek, Colorado. In those early years, smoking was allowed inside ... END_OF_DOCUMENT_TOKEN_TO_BE_REPLACED